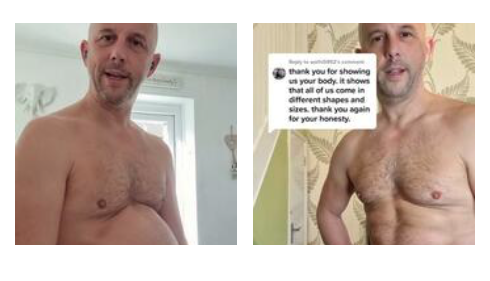 The sale of content on social networks is becoming the preferred option of many young Internet users around the world. In particular, there are the stories of Internet users who are content creators on OnlyFans, such as that of a paunchy man who is making a fortune selling “male pregnancy” videos on the adult digital platform.

According to a study by Semrushin January 2022 the social network accumulates approximately 248 million visits to the website of content creators.

In the same way, the importance of this digital platform is because it has positioned the audiovisual content production industry, as it cuts out the middleman and allows people to monetize their audiences through paid subscriptions or paying to download the content they have created.

The story of a man nicknamed “The Belly King” is causing controversy on social media, as is raising thousands of dollars selling “male pregnancy” videos to a huge niche on OnlyFans.

The subject identified as Simon Henderson, shows off his “pregnant” belly, for his group of fans who are buying content from his abdomen.

It was learned that the 48-year-old is a bank employee in the United Kingdom, he opened his OnlyFans account in January after having financial problems and has already earned around 4,400 dollars, around 80,000 Mexican pesos.

“I make happy and funny videos about being pregnant, moaning about it, talking about it and videos of me pretending to give birth,” the man explained to local media.

Henderson has more than 80 regular fans, who subscribe to his OnlyFans content every month; nevertheless, he admits he has trouble keeping them as he avoids any pornographic content on his channel.

Most fans fawn over the man’s huge belly because they like “vore,” which is vorarephilia, a sexual practice and fantasy that involves eating other people’s flesh.

Read:  Is inflation a factor of change in consumer behavior

The vore is the fantasy of being devoured as a form of pleasure, and also an appeal to the gray areas of sensitivity. Analyzing this fetish as an artistic expression, it is possible to notice that the images around this paraphilia reveal cracks in the viewer’s unconscious.

As the subject explains, this strange attitude can usually be seen in adult cartoons and explores the possibility of eating people and keeping them in the stomach and finally digesting them. “I can bring this idea to light in fun videos and my abdominal talent makes these videos visual rather than imaginary,” he says.

Henderson added that he turned to OnlyFans in January, after his marriage dissolved. He adds that he had already been making humorous videos about his belly on TikTok and YouTube, but decided to monetize his stomach by joining the adult subscription site.

“I only make about $110 a week on average, but it’s enough to support me,” she said optimistically.

Although his fan interests are unusual, Henderson says he has become more open since joining OnlyFans, and has no plans to quit.

This story is not the only one that has surprised people around the worldand that brings out the name of OnlyFans, let’s remember the woman Fie Laursen, who generated a fortune by selling photos and videos of her pregnant.

In that sense, beyond all the controversies that it has generated, today, social networks continue to consolidate among the community that seeks various alternatives to generate monetary income and different and daring content.