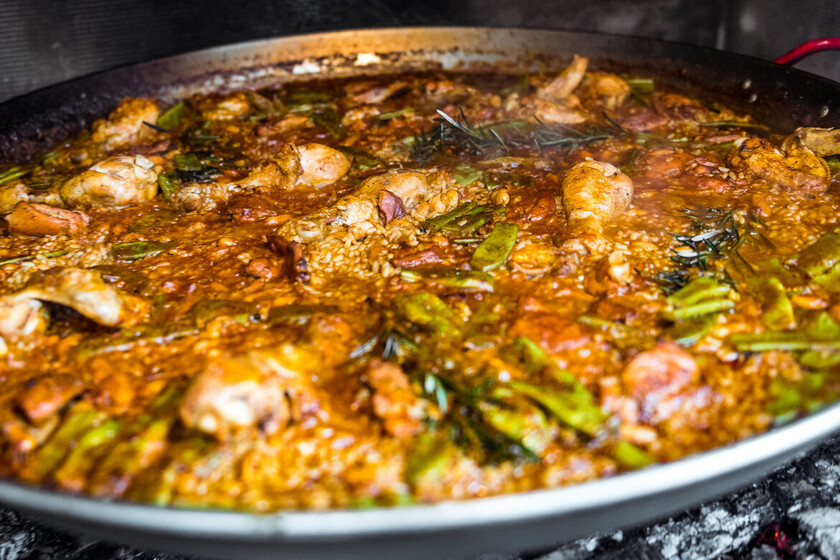 Paella has already been officially declared an Asset of Intangible Cultural Interest. More concretely, Valencian paella, «the art of joining and sharing», as stated in Decree 176/2021, of October 29, of the Consell de la Generalitat Valenciana.

The curious tagline, which has been included as an official denomination, in this case is relevant, as it well sums up the vagueness of the text regarding what exactly it is that you want to protect, without even defining what or how an authentic paella should be or giving a few notions about its ingredients, beyond rice.

It was last April when the BOE collected the official initiation of the file to declare the Valencian paella as BIC, since it is up to each Autonomous Community to “ensure the protection and defense of the identity and the values ​​and interests” of its people, its culture and its heritage values. Thus, the category of Intangible Assets includes musical, artistic, gastronomic or leisure events whose transmission is carried out mainly orally.

The objective is to officially register the property, identifying it with its description and its values, to develop research and study works that contribute to the protection measures of the same that guarantee their survival for future generations.

That vague something called «Valencian paella»

Far from trying to establish what is and what is not an authentic paella, the decree seems not to want to get wet in leaving out any interpretation of the iconic dish. The description and characterization of the property rather affects its cultural and social values, linking us to imprecise historical origins and the identity of the Valencian people. In addition, the historical data and the sources mentioned contain numerous errors, as the historian Ana Vega Pérez points out.

The text seems to embrace that popular term of “rice with things“by simply stating that paella” was established as a family recipe, which has never been without controversy, topics and paradigms, which are born from the customs of each place and different. “

Read:  Photoshop or Paint.NET, which program to choose to edit photos?

The only essential ingredient that is included is rice and its doneness, also mentioning recommendations on how it should be added or cooked, advising not to remove it, but without denying that there may be interpretations of the recipe that do. There are also mentions of the tradition of cooking it on firewood with orange wood or that all diners eat the same paella and using a spoon, accepting these customs as optional and increasingly obsolete.

Paella as a backbone and global icon

The decree, in short, does not intend to settle controversies about how a paella should be or what is the supposed genuine unique recipe. It would also make no sense, since its very nature of intangible property implies that throughout the generations and in the different territories it has been evolving and adapting, changing with society itself.

This transformation has been accentuated in recent years by spreading as icon of all Spanish gastronomy even beyond our borders. We may be horrified by certain foreign versions of the dish, but it is a sign of that universality that the text has not overlooked: «The continuous process of globalization characteristic of the 21st century has been a great advantage for paella, which is currently recognized worldwide. ».

The justification of the decree, therefore, is based on protecting the essence and origins of paella linked to the Valencian territory and its people, due to its value as vertebral and integrating cultural element of the society. Because paella, almost always, is prepared and enjoyed in company, at events, popular or neighborhood parties, with friends, with the family or, simply, in the community.

How to choose a good griddle to grill vegetables, fish or meat and five very practical models for all budgets