Oxxo employee reveals what sells the most in the store 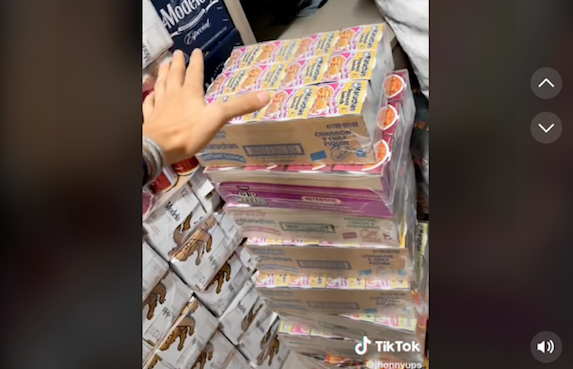 Social networks have served, on this occasion, for an Oxxo employee to make known which is the best-selling product in the store.

For a few years, brands like Oxxo or 7-Eleven have undoubtedly changed the consumption habits of several people, which is why, over the years, these establishments continue to earn the trust of their customers.

And it is that, to tell the truth, now it is practically impossible to imagine the streets without an Oxxo or 7-Eleven store; its strategic location almost on every corner has made its popularity grow by leaps and bounds.

In this context, Oxxo, in particular, is one of the most popular stores today. According to information published by the Bank of Mexico in February 2020, the convenience store chain was the company with the largest number of branches for the collection of remittances in Mexico, with a total of 19,146 establishments. For its part, Farmacias Guadalajara occupied the second position, with less than one eighth of the number of Oxxo branches.

This is because, today, consumers have a wide range of products that they can get by going to Oxxo, without the need to visit large supermarkets. In addition, among the experiences offered in this type of establishment, is the fact of paying for services such as telephone, internet, making bank deposits and the like.

Now, if something has helped not only Oxxo, but also companies and/or brands in general, it is the fact that they now have powerful platforms, such as Facebook, Twitter, Instagram or TikTok, which, in addition, They offer a highly relevant positioning service thanks to the influencers or content creators who live on the network.

Read:  Profeco reveals the medical laboratories with the cheapest prices

In an era where the digital scene continues to gain ground, it is well known that the popularity of creators and/or influencers does not stop, quite the opposite. In fact, according to the report “Creator Report” developed by linktree, Worldwide there are more than 200 million creators who “use their influence, creativity, or skills to aggregate and monetize their audience.”

Likewise, this study reveals that full-time creators generate income of more than 50 thousand dollars a year, which is why, According to Morning Consult, a large number of Latin Americans already have in mind dedicating themselves to the work of influencer.

Oxxo employee reveals what sells the most in his store

On TikTok, an Oxxo employee has decided to make content in order to publicize what is happening in the store, from promotions, launching new products, among others that have managed to surprise several Internet users.

Now, as part of his line of content, in his most recent video he revealed what is the best-selling product in the store.

According to the creator and employee of Oxxo, what is sold the most in the store he attends is Maruchan soup.making it known through a video that does not exceed three minutes.

This is not really surprising, since According to information from the World Instant Noodle Association (or WINA, for its acronym in English), Mexico is the second country in Latin America that eats the most instant souponly behind Brazil, and ranks 15th worldwide.

According to what WINA publishes, In 2020, the year of the pandemic, consumption among Mexicans reached 1,160 million units.

In short, we are talking about a space of great importance in the relationship between brands and their consumers, with social networks being the essential link today.