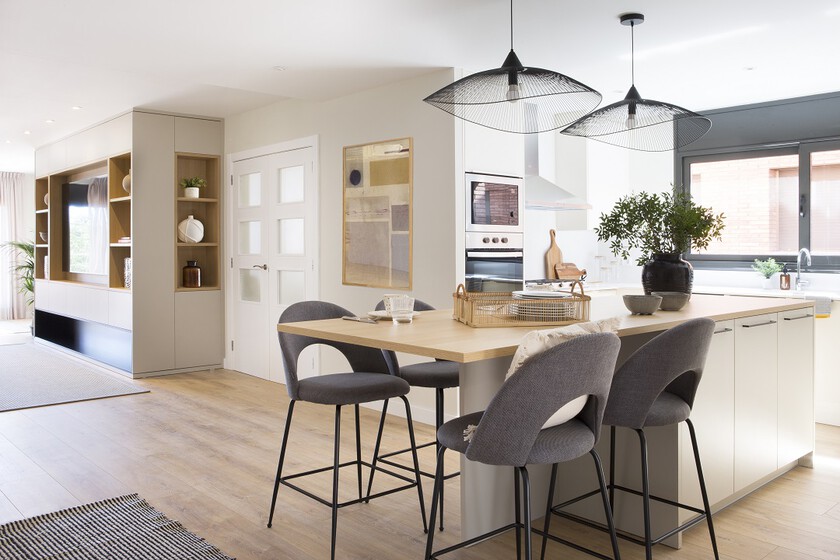 We have to admit that decoration lovers love to pull down partitions and redesign interiors to create larger and brighter spaces. And that’s what happened in the Comprehensive reform of this single-family home located in Mataró bearing the signature of Tinda’s Project. The owners of the house, a young married couple with a girl, had recently acquired it. And although the house had been built a long time ago, it was still brand new.

They wanted to adapt it to their taste and lifestyle, so from the interior design studio they modified the distribution, since the house (especially the main floor) was very compartmentalized. In fact, in the original plan, up to eight different rooms were counted, in addition to the corridor and the distributor. To achieve that goal, the first step was to remove partitions, open spaces and unify the entire house for the purposes of ceilings, door carpentry, floors, or installations.


The entrance to the house is through an imposing hall that stands out for its double height, a sensation that is sweetened by the use of a color palette based on neutral and soft tones, in combination with the warm wood of the parquet, common throughout the entire house. house except in the bathrooms.

In the hall we also find a console on which there is a Kave Home lamp (129 euros) and a built-in wall cabinet which has been designed ‘ad hoc’, occupying the place where the access door to the living room was originally, which, with the reform, is relocated a few centimeters further to center its passage to the main area of ​​this floor. The staircase to access the first floor is also located in this space.

The living room is the main intervention of the reform, since it has been extended considerably, opening it to the kitchen. To adapt the furniture to the dimensions of the space, pieces such as the dining table, located at the end overlooking the garden and measuring almost 2.5 meters, have been made to measure.

The sofas, arranged in an L shape, which has also been made to measure. One of them is four meters long, while the other measures three meters. Precisely, the sofas preside over the living room area, along with several coffee tables (159 euros) at furniture designed by Tinda’s Project to house the XXL television, as well as a hole that will soon house a bioethanol fireplace.

At the other end of the large day space of this house is the L-shaped kitchen. The kitchen furniture is the same as it was before the renovation, since it was brand new. The novelty of the project was the installation of a kitchen island designed as a bar for more informal meals, in addition to adding a line of paneled furniture that serves to hide some appliances. Next to the kitchen is the laundry area and access to the garden, as well as a guest bedroom and a courtesy toilet.

Did you like this stool? It’s from Kave Home, and it costs 115 euros.

Read:  These prefabricated houses are sustainable, they can be conditioned in detail, and you have them from 50,000 euros

On the first floor is the most intimate area of ​​the family, with the suite with terrace and bathroom, the children’s bedroom, another guest bedroom, an office, and another bathroom. Serene and neutral tones predominate in the bedroom to promote rest. The lacquered headboard has been custom designed, including oak wood niches that serve as bedside tables.

To take advantage of the passage to the bathroom, two large linear cabinets with mirror fronts have been installed, in order to visually enlarge the room, with a central detail of a decorative oak niche, winking at the headboard.

To design the children’s bedroom, in which gray predominates, the interior design studio has been inspired by a photographic safari, installing wallpaper on the wall, and a custom-made bed reminiscent of a lounge-type cabin, where no Some wireless lamps are missing (59.99 euros).

In the guest bedroom, the bed has an upholstered headboard that has been placed facing the window with the idea of ​​dedicating the side for a design by Tinda’s Project that includes the wardrobe with two sliding glass doors and a hole where several wooden shelves for decorative accessories, reserving the lower one to be used as a desk, with a pouf as a seat.

The office is also located on the first floor. In this room, the longest wall has been occupied with a piece of furniture from end to end made to measure for shelves and closed spaces that includes the two desks, one of them elevating because the type of work of one of them requires it. . The desk chair is from Kave Home, and it costs 105 euros.

And in the central part a bookcase that acts as a separator but with an open part to visually connect both sides, generating a symmetrical effect in the large wall cabinet. The combination of oak, white and gray wood respects the thread of the entire house. To complete the room, at the back of the room there is a small armchair for a specific moment of relaxation.

The single-family house has a large garden that has required extensive landscaping work to design each area with grass, plants, etc. hand in hand with the company Natural Gardens. In the back of the garden, taking advantage of the area that has more privacy, an outdoor space has been created for the family and their guests.

Parallel to the rear facade, a wooden platform has been arranged on which two environments have been created. On the one hand, a dining room with a table for six people under a bioclimatic pergola and, on the other, a living area with a sofa and two armchairs and some poufs (99.99 euros).