Outrage at IMSS over bloody fight between gynecologist and radiologist

By NicolasAugust 2, 2022No Comments3 Mins Read 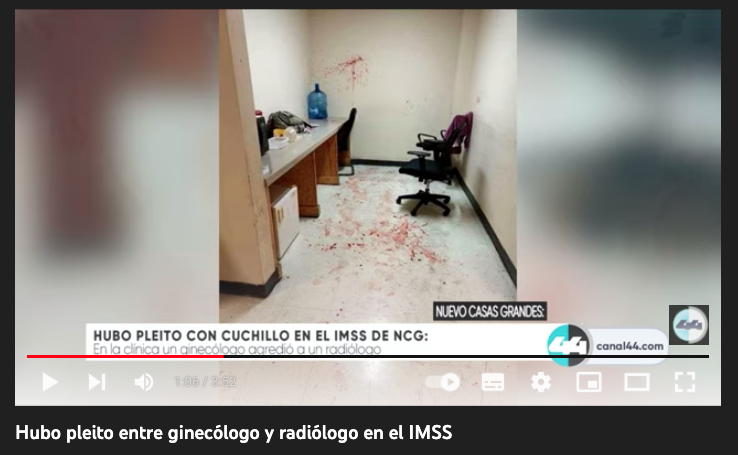 are currently living high rates of violence in our country and attacks against health professionals have even increased. But now they must not only take care of others but also between colleagues. All part of one fight recorded inside a hospital and which was carried out by a gynecologist and a radiologist.

In this sense, an objective that must prevail within any work team is to have a healthy work environment. Interpersonal relationships are too important to project a good image to patients.

Now, in any hospital, everything is lived to the limit and there is rarely free time. Usually everyone is in constant movement because there is always something to do. While there are so many emotions that are experienced in a day that it is common to lose control.

Index hide
1 Description of a sad incident
2 Why did they fight?

Description of a sad incident

Despite the foregoing, nothing justifies a painful situation that occurred within the General Hospital of Zone (HGZ) No. 22 in Chihuahua. Based on the testimonies of some witnesses, a bloody fight between a gynecologist and a radiologist. While a photograph showing an office after the assault has been viralized on social media.

I come to tell you about the IMSS fight in NCS, Chih:
On July 29, various media upload an image of a hospital, with blood stains on the floor, on furniture and on the walls, with the title  ¨Bloody fight in IMSS of NCS, gynecologist tried to kill radiologist¨  🧵(1 /9) pic.twitter.com/X6Yr7kt0Um

According to some local media, everything would have been caused by a love conflict involving a woman. The newspaper The Herald of Chihuahuawithout revealing names, mentions that the aggressor was the gynecologist, who used a sharp weapon to cause pain to the radiologist.

The argument was so severe that the intervention of other workers who were in the hospital was necessary to separate the two men. While the medical report indicates that the victim had fractured ribs and a possible fracture in the jaw, in addition to other injuries.

Why did they fight?

With respect to origin of the discussion has not yet disclosed a specific reason. One theory indicates that the radiologist “lowered” the gynecologist’s girlfriend and his fury was so great that it provoked this bloody reaction. While another hypothesis states that she was the sister of one of the elements that caused the conflict.

For its part, IMSS has been indirectly affected by this discussion in which its workers and facilities were involved. The immediate consequence was to open an investigation and mention that it will go to the bottom. He also clarified that there will be strong sanctions for the person or persons responsible.

Similarly, he added that This type of behavior does not match the image of Social Security. For the same reason, it invited all its staff nationwide to review the conduct manuals to prevent incidents of this type from recurring.

Given this, the IMSS issued a statement indicating that this type of behavior will not be allowedTherefore, the corresponding investigation will be initiated to determine the responsibilities that may arise.