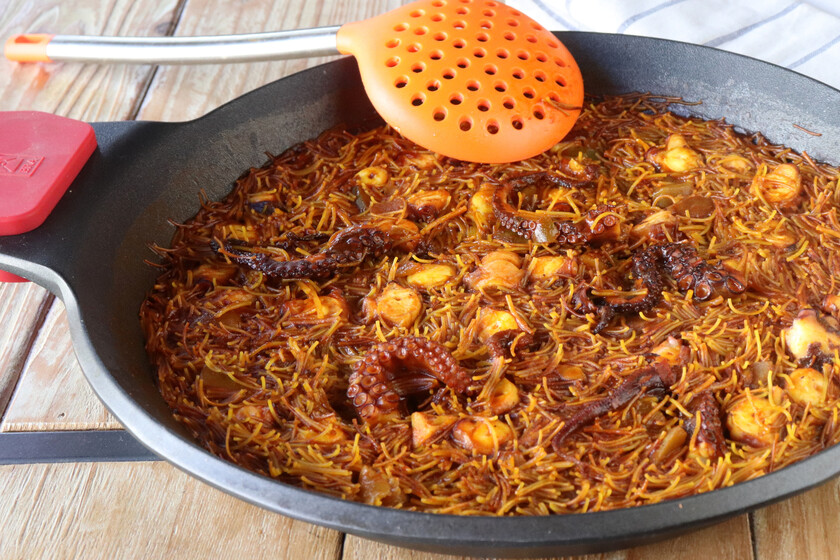 We start by browning the noodles in the paella, not too much, stirring from time to time so that some take more color than others. While we do this task, we cook the octopus without adding water, in a fast pot, for 10 minutes. Thus we will obtain the broth to make the fideuá. What we will need approximately 750 ml of broth, and from cooking the octopus we will not get as much quantity, we complete it by adding fish broth or a homemade whitebait broth that we have.

We brown the saffron threads for 20 seconds in the microwave or lightly toast them with the method that we tell you here. Heat a cup of broth and undo the saffron with your fingers, pouring it inside. Then we mix it with the rest of the broth and we leave it in infusion until we are going to use it. Sauté the cooked octopus legs in the paella with a little oil. Then we cut the thickest parts into slices, leaving the one-piece tentacle tips, to garnish on top at the end of the preparation.

In the paella, we put three or four tablespoons of our homemade sauce to heat. Then, we turn off the heat, and after a few seconds, we add the paprika and mix well. We light the fire again, and add the noodles and the octopus slices. Mix well for two or three minutes, while bringing the broth to a boil in a saucepan.

It’s time to add the broth to the paella, distribute the noodles well and place the legs or tentacles. Cook over high heat until the noodles absorb the broth. For entrefin noodles, it will take about 13 minutes. If, like me, you opt for the cabellin noodle, you can reduce the amount of broth a little and let it cook for about 8 minutes, calculating according to the instructions of the pasta manufacturer. We let the fideuá rest for a couple of minutes and take it to the table.

Read:  This programmable robot does it all and works with a Raspberry Pi