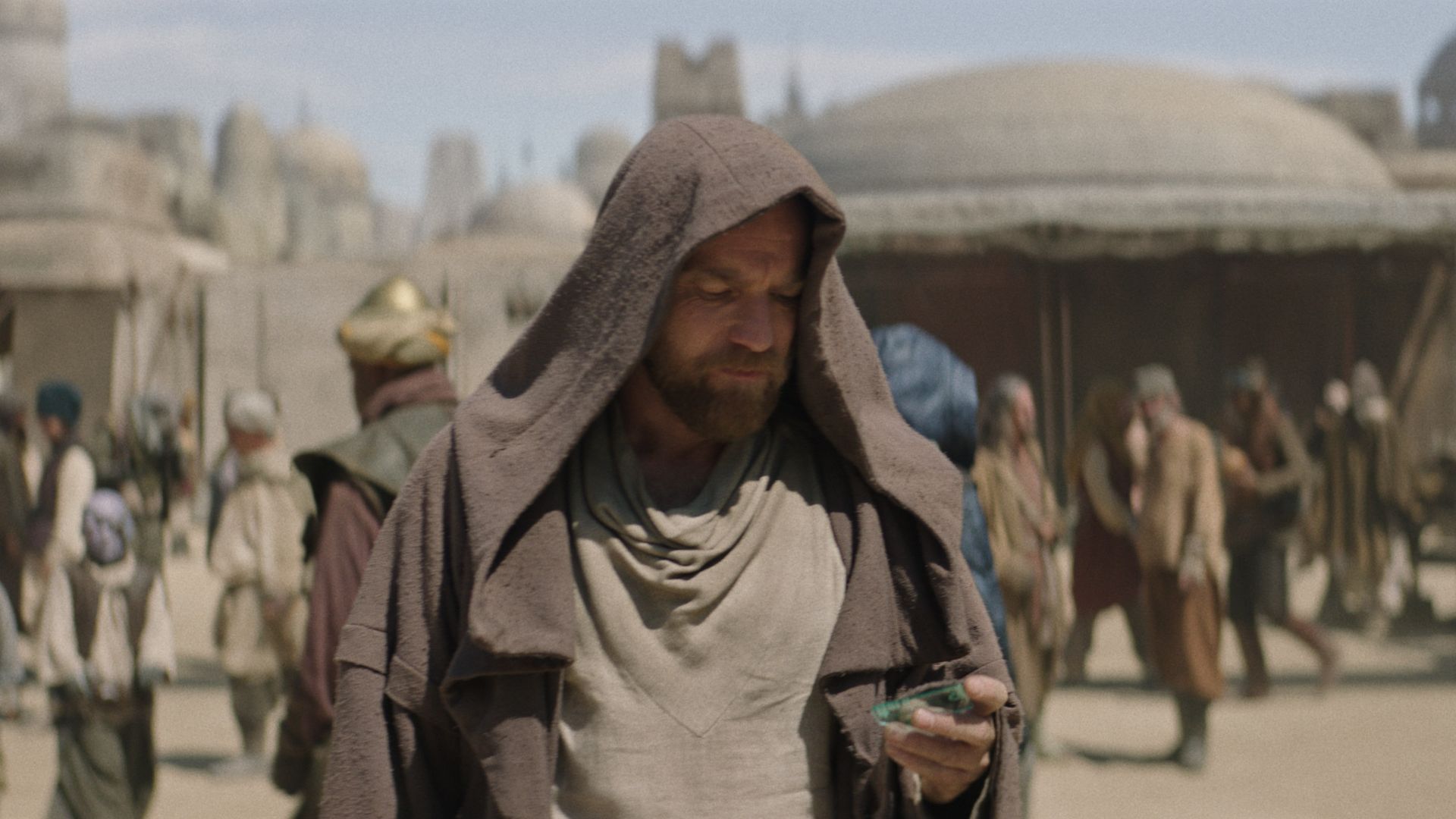 Index hide
1 The first two episodes of Obi-Wan Kenobi are already with us and we tell you all the references and easter eggs of the first, in this note!
1.1 training helmets
1.2 Species of Aliens and Droids
1.3 The nod to the Mos Eisley Cantina
1.4 the third sister
1.5 Obi-Wan’s gift
1.6 Obi-Wan’s flashbacks
1.7 Anakin’s spirit in his children
1.8 Like father Like Son
1.9 C3P0 and R2D2
1.10 The message of the Organa
1.11 Burying the past (and a couple of lightsabers)
2 Share it with whoever you want
3 Related Posts

The first two episodes of Obi-Wan Kenobi are already with us and we tell you all the references and easter eggs of the first, in this note!

One of the most anticipated series by fans of Star Wars, Obi-Wan Kenobi, is finally among us. We were able to see a double premiere, but since we consider that both chapters deserve their own notes, we are going to focus only on the first episode.

To put us in context a bit, Obi-Wan Kenobi is the series where we learn a little more about the history of the character played by Ewan McGregor after the events of Star Wars III: Revenge of the Sith. The prequels of starwars they were slowly gaining the affection of the fans and in recent years many were waiting for a new project focused on the character of mcgregor. After almost 17 yearsthe series finally came to us Obi-Wan Kenobi.

The plot shows us what happened after ten years with the teacher of Anakin Skywalker after their confrontation. To put ourselves in context, we have two little Skywalker ten years, so the series takes place nine years before the events of Star Wars IV: A New Hope. At the moment, we could only see how Obi Wan watch from the shadows tatooine a Luke and try to go unnoticed.

The first episode of Obi-Wan Kenobi is a great introduction to this unknown chapter of the world starwars. And let’s say that it slowly prepares us for what many of us are waiting for: a new confrontation between Obi Wan Y Anakinnow converted to Darth Vader.

One of the first things we were able to enjoy with the first episode was more content about the Order 66. In the Episode III of starwars we saw how Palpatine joined the well-known Order 66 to eliminate all Jedi. In the series, we see Velti Mineswho dies protecting their little ones padawans of a troop of clones. The voice of Palpatine can be heard in this scene, so we know that it takes place at the same time as when the massacre began at the hands of the Order 66.

The little ones padawans of Obi Wan They wear helmets that you probably recognize. These are the ones he used Yoda to train the little ones in the scene of Star Wars II: Attack of the Clones. Helmets cover the face of padawans to develop their reflexes and it could be said that it is a kind of reference also to the first training of Obi Wan with Luke in A New Hope.

Species of Aliens and Droids

In the first episode we were able to see several Aliens Y droids that we already know. we have several Jawas and a R2 red walking the streets of tatooine Y Kenobi ride a eopiea species we saw in Star Wars I: The Phantom Menace. Another species that appears is a scurrierwhich we can see when Obi Wan cross the desert. Breha Organa also mentions a Glor’agcanon creature within starwars legends.

Later we can see read thanking a golden droid named ME while his father comments that he persecuted several purrgilsome creatures that we know thanks to Star Wars Rebels. The little version of our beloved princess also comments that she would rather be eaten by a jakobeast before apologizing to her cousin.

The nod to the Mos Eisley Cantina

In a scene where Grand Inquisitor walk into a bar tatooine requesting information on the whereabouts of the Jedi local, most of the drinks of the place are served in glasses that you surely know. These are white and translucent and the first time we saw them was in A New Hopeparticularly in the scene of the Mos Eisley Canteen.

After everything went wrong at the bar, the Grand Inquisitor refers to Reva as the “Third Sister”. Inquisitors are often known by their titles of brother and sister in Star Wars Rebels. Many believed that in Obi-Wan Kenobi this was not going to be like that, but it seems that the Inquisitor will follow the canon that we met in Rebels.

After secretly spying on Luke Skywalker, Obi-Wan decides to send him a gift and buys a toy ship from Teekathe recognized jawa. And you may have noticed that this ship is quite familiar. This is because the toy ship is the same one with which the Luke Skywalker of Mark Hamill play at the beginning of A New Hope.

Read:  These are the 10 great games coming to Xbox in February

But the gift did not go as Obi Wan I expected. in a scene Owen Lars seems to be quite annoyed with the gift that the Jedi to his nephew. This scene was taken from one of the comics, the one with 2016 called Star Wars Vol 2 #15. In this comic, Obi Wan sent supplies to the family lars and the answer of Owen It was quite similar to the one we saw in the episode.

From what we could see in the first episode, our dear Obi Wan he is suffering from nightmares related to everything that happened in the prequels. Some of the scenes we see include the fight in Moustafar, Anakin Skywalker tempted by the dark side, the death of Qui-Gon Jinnvarious missions Episode IIthe body of Anakin burning up, Yoda, Padme, the birth of the Skywalker already a young man Anakin piloting a starfighter.

Anakin’s spirit in his children

when we see Luke in the episode for the first time, Obi Wan realize how similar it is to Anakin. Luke play to be a pilot of a starfighter like his father used to do. But Luke he is not the only one who has a love for ships and stars. his sister, readshe also appears to be more interested in these items than her official duty.

In Star Wars I: The Phantom Menace, Padmé Amidala she used a double to avoid being assassinated. For this, she made Knowsa maid, dressed up as her and pretended to be the Queen of Naboo. Y read he appears to have inherited this trait from his mother. In the first episode of Obi-Wan Kenobi, read asks a friend if she can impersonate her at the ceremony in Alderaan. And as if that were not enough, in one of the scenes Breha Organa tells to read that if she behaved like a climber, she would already be a senator. This phrase refers to the future of our beloved Senator Organa.

Our favorite androids make an appearance in the first episode of Obi-Wan Kenobi. At the party of organ in Alderaan you can see a shiny, gold protocol droid that appears to be our beloved C3P0. As the party begins to wind down, we can see a droid resembling R2-D2 handing out a couple of drinks to the guests. These androids are probably the ones we already know because in the prequel they leave with read a Alderaan.

The message of the Organa

When read is kidnapped, organ they call Obi Wan desperate for help. The couple says nothing more than “Help us Obi WanYou are our only hope.”, a phrase you probably recognize. This same request for help was used by read in A New Hope and the medium in which it was performed was also the same.

But this is not the only interesting thing related to the kidnapping of our beloved read. When we meet those responsible for such an atrocity, we can see a well-known face in the world of music. For a few seconds we get to see fleebassist of the Red Hot Chilli Peppers. It seems that playing in a world-renowned band doesn’t pay off, but kidnapping princesses for the Empire does.

Burying the past (and a couple of lightsabers)

In the first episode, Obi Wan meet a partner Jedi called fugitive nari, who proves to be an ally when he shows him his lightsaber. Obi Wan advises you to Nari bury the weapon deep in the sands of tatooine and we see that our dear Jedi did exactly that.

The fact that Obi Wan buried his lightsaber is a clear reference to the events of Star Wars: The Rise of Skywalkerwhere King buries his own saber. However, this is not all as we discovered that Obi Wan not only buries his saber but also that of Anakin. This saber had been considered lost after the fight in Moustafar but it seems that Kenobi wanted to keep at least the weapon that carried his Padawan before becoming Darth Vader to remember that once there was light inside.

The Serie Obi-Wan Kenobi is already available in Disney Plus. The first two episodes came to our screen this may 27th and we will be able to see one episode per week. The series only has six chapters and the last one will come June 22nd.

Bear markets are for learning and people are doing their homework

I can’t stand the “get excited”

We spoke to Frontier about the Dominion Biosyn expansion