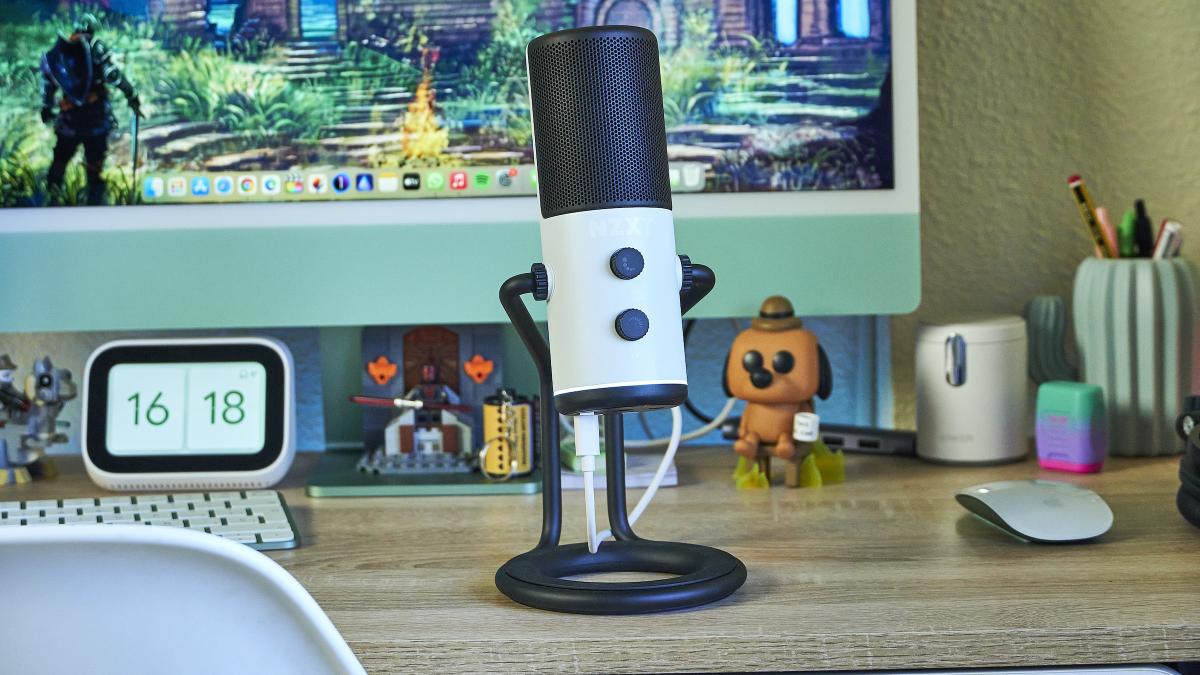 In recent months, due to the pandemic and because we have had a lot of time at home to develop hobbies, many users have started doing little things live on the internet.

We do our weekly podcast on Mondays and, precisely, that type of content has grown like wildfire in recent years.

For all these cases, a camera is necessary and, above all, a good microphone. The ‘gaming’ companies know this and these months we have seen quite a few cameras, such as the Razer Kiyo Pro -review- or the Logitech StreamCam -review-, but also microphones.

Good sound is essential to enjoy content on the internet and, if a few months ago we analyzed the Blue Yeti X from World of Warcraft, now it’s time to give our opinion of the NZXT Capsule in this review.

Sections of the analysis of the NZXT Capsule:

Very careful design and thought for both arm and desktop

When we talk about a microphone, its design is something that may not seem important to you. However, I think it is, both because of the personal feeling of sitting at the desk and because of what I can convey to my audience.

The NZXT Capsule comes in two colors: an elegant black and a white that I find beautiful. The support and the condenser grille come in black in both cases and the contrast seems very elegant to me.

I have the first generation Blue Yeti, a microphone that picks up the voice in a spectacular way and that has several capture modes that, due to the content I make, I do not take advantage of. But something that also has that micro is that it is huge.

The one from NZXT is much smaller and, above all, lighter. Placed on the base it has a weight of 883 grams and a total height of 252 millimeters.

Without the base it is about 314 grams, a weight that is not bad at all considering that both the support and the microphone itself are made of aluminium, which gives a quite TOP sensation to the touch.

We have that ‘premium’ feeling from the packaging, with a very elegant box that very well protects a microphone that already has the base pre-assembled.

if we want, we can put the mic on a table arm And here comes into play something that I really liked about the Capsule. And it is that, in the back part, it has a piece that we can put on and take off very easily, simply by pressing the button. This is how we take it off the support.

So that it doesn’t get ‘ugly’ without that piece of the support, the package includes a piece that we can put on the back so that the aspect is totally cylindrical and the way to adjust it on an arm is by means of an adapter that is also included in the cash register.

Oh well, we have had it on the table support all the time and the truth is that the stability is total. In addition, it does not slip on the table thanks to pads on the bottom.

What I didn’t really like about the stand is that the threads on the sides don’t tighten too much and it’s easy to inadvertently tilt the microphone, at least on my unit.

But well, continuing with the design, we have a LED ring at the bottom which has two modes. If it is blank it means that it is listening to us, but if we press the gain button the ring will turn red, which means that the mic is muted.

At the bottom we have the headphone jack to allow us to hear our signal, but also acts as a sound path to connect, for example, the wired headphones directly to the microphone and listen to whoever is speaking to us in a podcast or meeting.

There we also find the USB-C connection. I like that we have USB-C as even some newer mics have a microUSB interface so it’s easy to connect this mic to newer gear. Of course, the cable that arrives in the box is USB-C to USB-A, with a satisfactory length.

On the front we have two ABS plastic buttons to control the gain and volume of the headphones, but also something that I did not like too much.

It has rubbery teeth that make it easier to grip, but they are wheels with infinite rotation.. That is to say, we are going to be able to stay until we get fed up turning to the left or right because it does not have a stop, and this seems to me to be a mistake.

If you have decided to record a podcast, you need a suitable microphone: in this report you will learn everything you need to know and you will see some very interesting models.

I don’t care about the headphone volume control because I literally control the volume ‘by ear’, but the gain control is very dangerous. The wheel is very sensitive and we have no real indication of what the gain is.

Read:  How to insert footnotes and end of page in Excel step by step

In a next generation, I think there should be an internal toothed system or an LED indicator so that we know at all times what the gain of the microphone is. Or even an infinite wheel, but with some marks around it that allow us to know if we are at level 1, 5 or 10.

A warm sound with headphone pass-through and infinitely rotating buttons

But hey, let’s get to how important, in the end, is audio quality and handling. The spoiler is that the NZXT Capsule is extremely solid here.

Something that I want to highlight first of all is that it is a totally Plug&Play microphone. This means that as soon as we take it out of the box and connect it to our PC or Mac, the computer detects it as an audio input source and we can start working with it.

Yes, the vast majority of microphones on the market are like this, but many also have software from which to control some parameters.

In this case there is no such software and it seems to me something very comfortable because we will always have the same user experience and the same voice quality we are in the team in which we are.

This means that at home, in the office on another computer, on a business trip connecting the microphone to the mobile phone or to a laptop that I am testing, I will have the same sound quality, which gives consistency to the content that I am creating at any given moment regardless of the place.

I have also tried to connect it to some mobiles and we can record without problem. This factor, together with the low weight of the micro and its form factor, allows the equipment to be very ‘portable’.

And well, it is already clear that the microphone is easy to use, but the most important thing is to check how it sounds.

For this, an audio is worth a thousand words and, although Soundcloud compression may be there, we have recorded a track with Garageband in studio quality, the maximum available, so that you have a test on how it picks up my voice.

It seems to me a more than correct audio for gameplay and podcasting. It is not at the level of the Shure MV7 –which costs 211 euros– in voice quality or of the Blue Yeti for its versatility, since they are two more ‘professional’ microphones, but of course it allows us to record and broadcast with a quality that is more than good for working on the internet.

I think the voice is warm, I have no distortion, no background noise thanks to that cardioid pattern and the base mitigates accidental noise quite well.

I leave you one more example from day to day, with streaming compression in Streamyard, but so that you have another reference.

You have to be careful with the comment about the gain due to the infinite wheel, but the control of the headphones thanks to the integrated amplifier seems very comfortable to me and, in addition, there are some surprises under the hood.

And it is that, the capsule has an integrated pop-up filter, which minimizes air bumps in letters such as voiced bilabial consonants (‘b’ or ‘p’).

Y, since it is unidirectional, we have to be right in front of the microphone so that it captures us well. In the audio test you have an example when speaking from one of the sides. We are ‘caught’, but we are heard much more softly.

You don’t have to be close to the microphone for it to capture us well and I usually have it a foot and a half from my mouth. Controlling the gain, obviously, you can separate it a little more, but white noise will sneak in. The ideal is to have a low gain to maintain a very good sound quality with a very warm tone.

And yes, although we don’t have software for the micro, which is part of its ‘charm’, in programs like OBS we will be able to control the gain directly from the software, so I haven’t missed a supplemented program.

And, in the end, what I have found with the NZXT Capsule is a microphone that is attractive and, I think, looks great in any setup, but is also very practical.

Its modular design makes it easy to attach to a boom or stand, as well as detach the stand from the mic to fit in a suitcase without unscrewing anything.

I find it very elegant in the white color, the LED ring is a clear visual reference of the state of the micro and, most importantly, The quality of the voice seems to me according to the price, being very good.

Currently it can be found at about 115 euros and both for its response and for the warmth of the sound it collects, I think it is a very good semi-professional bet for podcasting, reviews with background voice or video game streaming.

The NZXT Capsule is a cardioid microphone with USB-C connection and headphone pass-through that has a very careful design and promises to be an easy solution for streamers who do not want to complicate their lives.

It’s not perfect though I did not like the detail of the wheels with infinite rotation, especially the gain that can screw up a recording, but otherwise, it seems to me an excellent first foray for NZXT in this type of hardware.

Portal 64, Demake of Portal for Nintendo 64 made by a fan

the digital euro could arrive in 2026