By NicolasDecember 13, 2022No Comments4 Mins Read 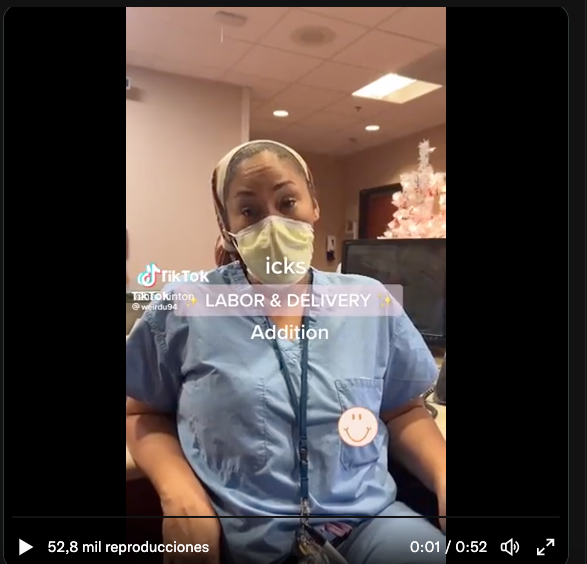 A basic principle that all health professionals must follow is to show respect towards patients. It is the first lesson taught in college and must be followed in the professional field. If this indication is not followed, the consequences can be of different magnitude. The most recent case involved a group of nurses and a controversial video posted on TikTok.

In this sense, the days inside a hospital are quite complicated because of everything that must be done. There are many activities and what is always missing is time. In addition, patients are not always friendly and understanding. In fact, there are some who are quite rude to people who just want to help them.

For his part, Regardless of the circumstances, it is necessary for health personnel to maintain a calm and solemn attitude. It is complicated to achieve but in no way can it be exasperated because the only thing that is achieved is to generate an even more complicated environment.

In that sense, In recent years, social networks have become a new medium for publishing any type of message. Although there is freedom, it is necessary to remember the basic principle of respect. You cannot attack third parties because it can be interpreted as an incitement to violence.

The foregoing leads to a case that occurred with a group of nurses from the Emory University Hospital Midtown in Atlanta, United States, and a controversial TikTok video. In total there were four protagonists of a challenge called “icks” in which they recount what they dislike about patients.

The video, just under a minute long, contains offensive comments against maternity patients and women in labor. While another serious mistake is that it was recorded inside the hospital facilities and the nurses wear their work clothes.

The post went viral pretty quickly, racking up over 100,000 views within a week. Thanks to his popularity, he reached the authorities of the Emory Healthcare and immediately caused discomfort. For the same reason, the first decision that was made was to request his withdrawal from TikTok.

But that was not all because according to the Washington Post the hospital also made the determination fire the nurses featured in the TikTok video. The argument used is that a health professional can never make fun of a patient, not even in a post on social networks. In addition, the authorities published a statement on Instagram to offer an apology.

“This video does not represent our commitment to patient and family centered care and falls far short of the values ​​and standards we expect every member of our team to hold and demonstrate.”

Now, although the video of the nurses has already been removed from TikTok, a user uploaded it to Twitter. We share it with you below so you can see it and you can decide if it was right or exaggerated to fire the health workers for their comments.

Nurse murdered in Edomex: Mourning in the health union

Nike creates special sneakers for doctors and nurses: Here you can buy them with home delivery

Nurse will pay a million-dollar fine for calling herself a “doctor”: This happened