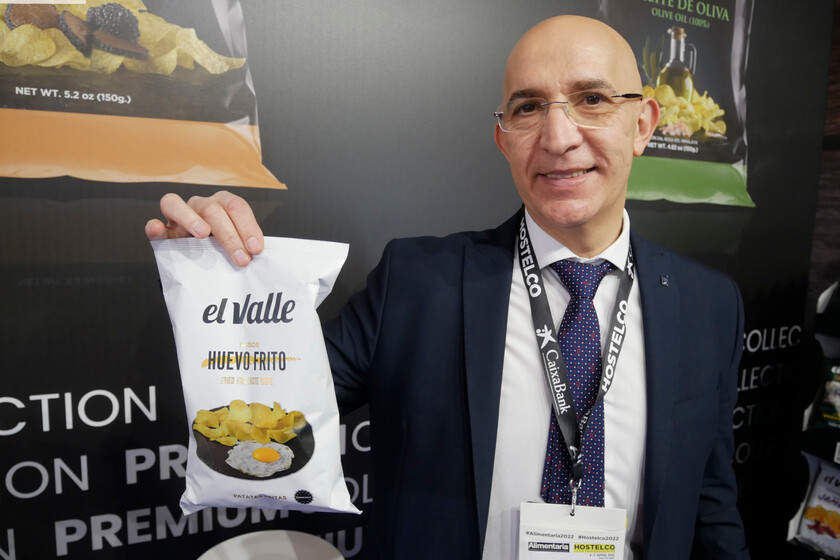 Major John He has been in the potato chip business for 40 years, but he is clear about his greatest success. “A bombshell”, in his own words, that pushes the capacity of the food industry to the limit to imitate recognizable flavors without resorting to the original ingredient: fried egg potatoes.

Mayor, tells us at the Alimentaria fair, founded the company El Valle after leaving another potato chip company and, shortly after, he began to market his products under the banner FarmerMercadona’s white brand.

The company, based in Villena (Alicante), had already launched apparently more exotic flavors such as “roast chicken” or “lemon and pepper”. Until then no one had thought to explore the mixture of potatoes with eggs, despite being an almost mandatory association.

“What could be simpler than some potatoes with eggs?” asked Mayor. But from saying to doing there is a stretch. Achieving such a successful flavor was not easy at all and, in fact, when he presented the proposal, his colleagues They couldn’t see it clearly.

“I presented it to our operations committee and said ‘this is a hit’, but the designers and others thought I was crazy,” he explains. “I’m not crazy, I just say what I think, and if we don’t release it we are going to regretI told them”.

How to make a potato that tastes like a fried egg

It seems logical to think that flavored potatoes have product aromas whom they try to imitate, but it is not usually like that.

There are products such as eggs, which are best avoided as such, as they complicate food safety processes and add an allergen to declare. But in reality, as Mayor explains, “no flavor comes from the essence of the product itself, rather they are combinations of different products mixed to bring out that flavor in the potato base”.

Achieving this type of flavor is no small feat and requires R&D processes that can take years. The director of El Valle avoids giving exact details about how these potatoes are made, but points out that the egg flavor is obtained through sulfides, which are strongly reminiscent of the aroma of the egg. Then, he points out, you have to mix that aroma with a granule that gives the fried potato adherence. “The fair, because if the potato flavor is not loaded,” he explains.

Read:  Kirby And The Forgotten Land Switch Review: The RPG Comes To The World Of Our Dear Pink Friend

A product that the whole world has imitated

Fried Egg Potatoes came out in 2017 and were a immediate success in Mercadona, that allowed El Valle to make itself known. “All the distribution that we had sold barbarities and people who were not distributors in their day or who did not know us, he knew us. It was a turning point where brand visibility was important.”

Many imitators also emerged. “They are not the same because they have their own characteristics,” explains Mayor. “But in the end people investigate and comes to similar conclusions.

It is noted that this veteran of the world of snacks he is proud of his invention. He knew that the fried egg-flavored chips were going to be a hit, but they might not have been: “How many times have I been wrong? very many. One more, nothing happens. This is trial and error test fail. 30 years ago I cut a potato that was not accepted, it was smooth on one side and wavy on the other. Maybe now you’ll release it, because people are more open to new forms and new flavors and it works”.

For now, however, this hybrid potato chip is still in the drawer. The product that Mayor presents this year are some cheese flavored chips. Guess without what ingredient? “Without lactose and without any type of allergen”, concludes Moya. “It has taken us a year and a half of work to be able to find that point.”

In DAP | How to make potato chips at home, a simple recipe for the most tempting appetizer
In DAP | This is how the mythical Kojak was conceived: the cherry-flavored candy filled with chewing gum from the 70s, which continues to be sold by the bucketload