Newly opened hospital floods; it is the mockery of social networks 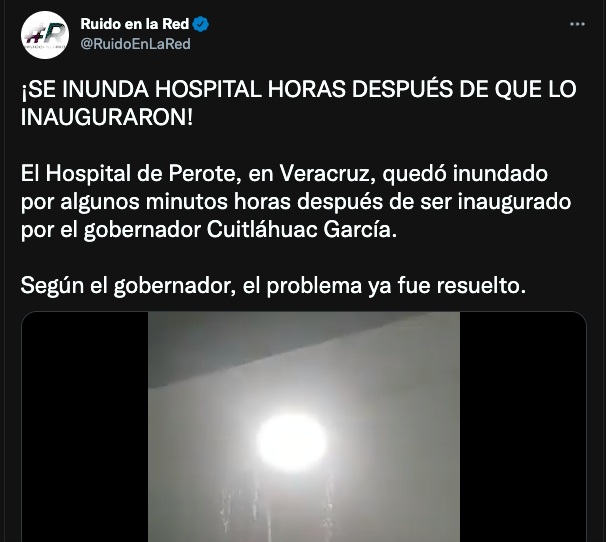 One of the most serious problems of Mexican health is infrastructure. Not only are units missing, but the existing ones have obsolete real estate and facilities. But it should also be added that many times new works are not built with the best materials. In fact, now a Mexican hospital has become a trend on social media, but not for the right reasons.

The construction of a hospital is a delicate aspect. Due to its function, there are many aspects that must be considered. In fact, there are legal regulations that are in charge of verifying all the details.

Everything you need to build a hospital in Mexico

In that sense, the Federal Commission for the Protection against Sanitary Risks (Cofepris) is the body in charge of verifying the works. Also There are various Official Mexican Standards (NOM) for the design and construction of hospitals. Among the most important are the following:

Establish the minimum infrastructure and equipment requirements for medical centers.

It establishes the minimum characteristics of equipment and infrastructure of hospitals. It also applies to doctor’s offices, where precise compliance is needed in both cases.

It establishes the aspects to facilitate the access, use, transit and permanence of people with disabilities. It applies both to hospitals of the National Health System and to outpatient medical offices.

Read:  Medications for the treatment of Chagas disease

From happiness to teasing on the internet

However, despite all of the above, the final works do not always come out in the best way. The obvious example is a hospital that the same day of its inauguration suffered its first flood and was immediately mocked by social networks.

We refer to Perote General Hospital in Veracruz. During the morning of this July 20, a public event was held to present the hospital. It even had the presence of the entity’s governor, Cuitláhuac García.

During his speech he emphasized that it is a work abandoned by previous governments. Although the constructions began in the end, they were not resumed until after 12 years. As long as they were necessary 130 million pesos to rescue the facilities.

What seemed like positive news was completely transformed because that same day but during the night something unexpected happened. It is a severe flooding in the emergency area of ​​the hospital.

HOSPITAL WAS FLOODED HOURS AFTER IT WAS INAUGURATED!

The Hospital of Perote, in Veracruz, was flooded for a few minutes hours after being inaugurated by Governor Cuitláhuac García.

According to the governor, the problem has already been resolved. pic.twitter.com/bW5Ev9y5xi

Through social networks, several videos were shared showing the hospital in the rain. The teasing has not stopped although the state authorities have tried to explain the situation.

Based on what was declared, everything originated because one of the pipes had a high pressure failure. As a consequence, a leak of approximately 80 liters of water was generated and affected both hospitalized patients and health workers. In the meantime, it is mentioned that the problem has already been fully resolved.