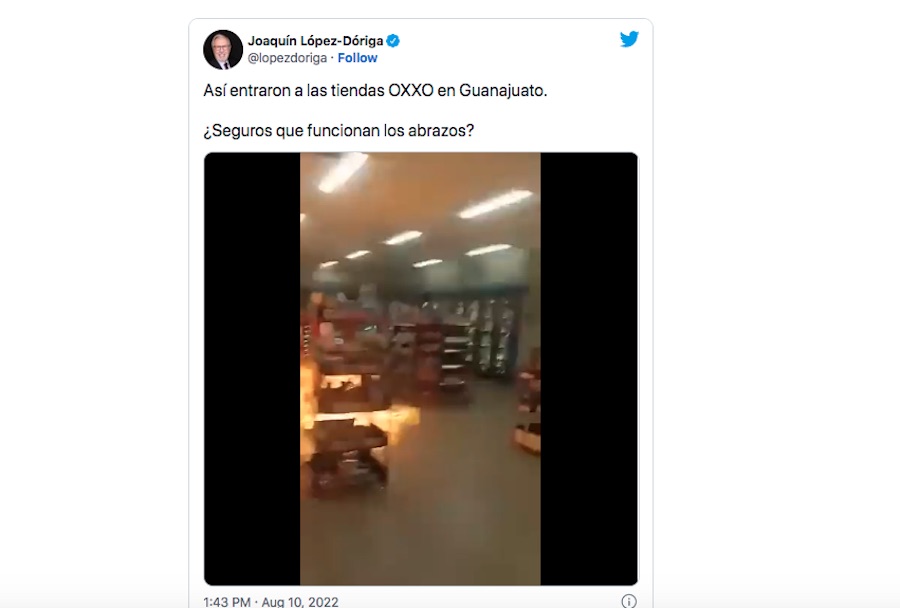 A new video reveals how consumers flee from one of the fires at Oxxo stores in Guanajuato. The material was released by the journalist Joaquín López Dóriga.

This Tuesday August 9 Various fires were recorded at Oxxo stores and other businesses in the state of Guanajuato and the events that violate the retail in the country, they exhibit crucial tasks on which the private initiative has taken security measures; however, the matter is still a pending issue to be resolved comprehensively, especially when we see the Dear of Crime Insightswhen the platform estimated that there were 26 murders For each 100 thousand inhabitants in the country, at least until 2021 when he launched that projection.

The high homicide rate recorded in Mexico is a symptom of the violence that was documented on video and shows how consumers are violated at the point of sale, when armed individuals enter an Oxxo store to set it on fire.

This incident recorded during the night of this Tuesday, August 9, adds up to now 25 Oxxo stores violated and Femsa confirmed that it did not register any fatal loss after this phenomenon of violence that was registered in its establishments.

“Fortunately, all our collaborators and clients are doing well. We are in communication with the corresponding authorities.” explained Femsa Corporate Communication.

In the new material that documents how the events would have occurred, at the hands of armed men, who are supposed to record the material, it shows how huge flames begin to rise in the corridors of an Oxxo while screams are heard inside. The shot ends by showing people running out of the store while gunshots and screams of the victims are heard due to the stress generated.

This is how they entered the OXXO stores in Guanajuato.

Are you sure hugs work? pic.twitter.com/r2yhwgS9V0

The serious aggression that took place in Guanajuato, where Oxxo stores, furniture stores, pharmacies and vehicles were set on fire makes us question the concept of consumer safety at the point of sale and how resources that are not only measurable, such as the measurement of Crime Insightsalso with measures that the private initiative itself has implemented to become safe places, at least in appearance.

Read:  This is how "Rakata", by Wisin & Yandel, is heard in classical music

Oxxo, for example, has become a chain of stores famous for its locations, with stores on the beach that offer spectacular views or because its stores are armored, as has happened with the safest Oxxo store in Mexico.

The branch located in the municipality of Coacalco, State of Mexico, has metal sheets in both windows and doors, so it becomes a bunker-type property when you close the door.

This adaptation that has been seen in retail has been implemented for years in the famous corner shops, even patenting an entrepreneurship model, where shopkeepers add metal bars to the windows of their stores, as a security measure against possible attack attempts or assault.

With these practices implemented in the premises of entrepreneurial shopkeepers or in Oxxo stores, violent phenomena continue to be recorded and there seem to be no stores that resist these practices, especially at a time when virality makes violent events in Mexico unfortunate references for their image, on which industries such as tourism depend, especially when, according to one projection of the INEGI, has registered a growth since the 24 million tourists in 2020 to the 31 million in 2021.

The store bombings Oxxo of Guanajuato mark a precedent for convenience stores, where customer service policies must think of new practices in case of eventualities with the magnitude as witnessed in the videos shown.