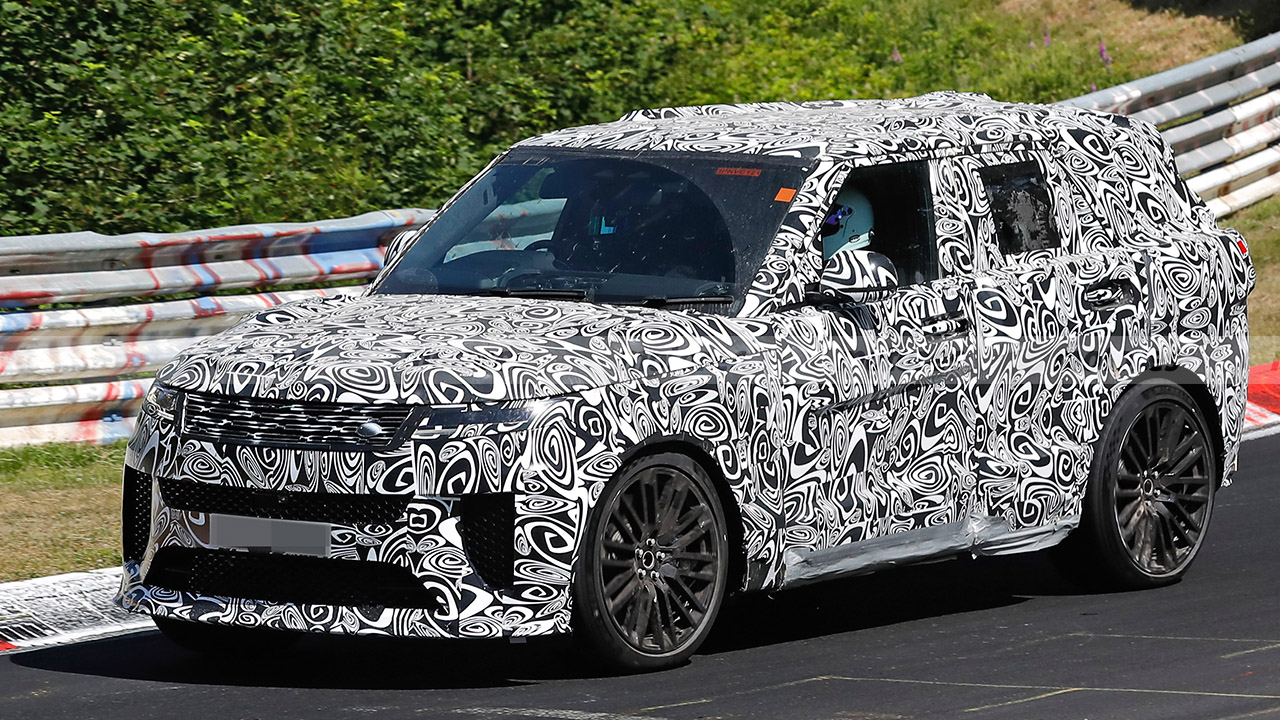 Land Rover continues to work at full capacity in the development process of the new Range Rover Sport SVR. The long-awaited high-performance variant has returned to the popular Nürburgring track for further circuit testing. A prototype has been hunted sporting lighter camouflage.

The development process of New Range Rover Sport SVR keep going. Land Rover has launched all the machinery with the aim of soon offering a more sporty, radical and dynamic variant of its recently renewed SUV. The new generation of the Range Rover Sport is already a reality and in a short time we will know the version that will crown the offer.

Once again, the new Range Rover Sport SVR has been hunted in broad daylight. Specifically, our photographers have found a prototype of this model on its particular return to the Nürburgring track. land rover has moved its “headquarters” to the German circuit to carry out some very important track tests.

The new Range Rover Sport SVR pictured on its return to the aforementioned circuit sports a lighter camouflage. Although practically the entire exterior is covered by camouflage, Land Rover has removed a significant amount of the front. This allows us to intuit more clearly what the design is that is hidden under the vinyl and temporary elements used by the company to avoid prying eyes.

At the front, the air inlets and the grill are exposed. Curiously, the optical groups are partially covered. On the sides and behind, camouflage is the protagonist. In addition to the characteristic vinyl used by Land Rover, there are certain temporary panels that seek to hide the design. The exhaust system outlets are visible.

The rear area of ​​the new Range Rover Sport SVR has been shown to be more evolved and closer to the production version in other sightings. The exhausts, for example, have already been seen with their final trims.

Under the hood of the new Range Rover Sport SVR is one of the main keys of this variant. It will make use of a powerful 4.4-litre twin-turbocharged V8 petrol engine. a block of BMW origin used, among other models, by the BMW X5 M Competition. An engine whose power will be around 600 hp and will be associated with an eight-speed ZF automatic gearbox and a 4×4 drive system.

An important key of the aforementioned engine is that it is a conventional mechanic. It does not have any type of electrification. Not even 48-volt light hybrid technology (MHEV).

When will it hit the market? The landing at European dealerships of the new Range Rover Sport SVR is set for the first half of 2023. Therefore, it is not ruled out that its debut will take place before the end of this year. Let us remember that the new Range Rover Sport has been recently presented and that the first units will be available in the fourth quarter of 2022.