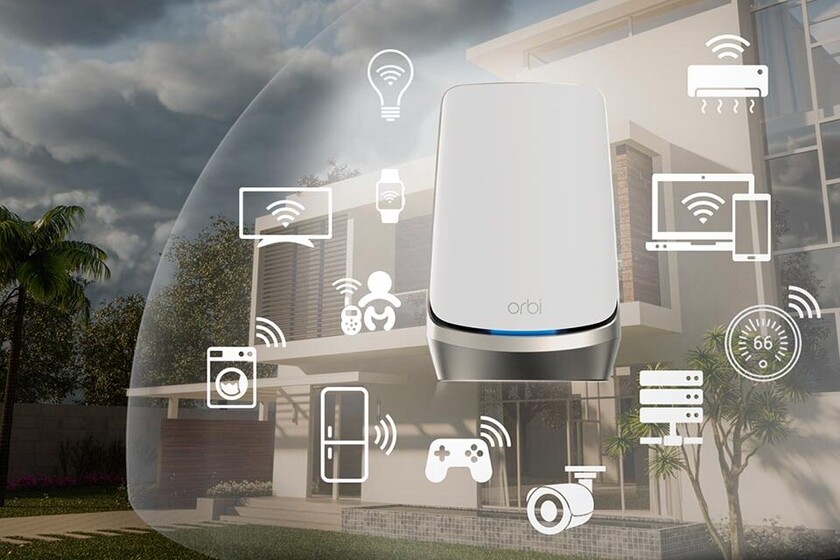 When it comes to improving wireless connectivity at home One of the options that are gaining interest in recent years are Mesh network systems, versatile and capable of extending coverage over multiple rooms.

In this sense Netgear has announced the launch of a new system called Orbi Quad-band Mesh WiFi 6E System (model number RBKE960) that promises to offer some of the latest functionality for a few years thanks to the WiFi 6E standard.

It is a set of two adapters plus a router, all of them with internal antennas and elegant shapes designed to go unnoticed anywhere in the room where we install them. Inside we find a powerful WiFi 6E system capable of creating a wireless access point of four bands.

Read:  S1 Smart Scene Panel: This Aqara display mounts like a wall switch and is compatible with Apple HomeKit

One of the 5 GHz bands is dedicated to the return channel between the different devices, a function that we can also do using the included wired Ethernet links. This is precisely another advantage of this system, since the router has a port to 10 Gbps, another to 2.5 Gbps and three more to 1 Gbps to connect our devices.

The nodes have almost the same capabilities, with the exception of the 10 Gbps port that is not present. The set of three adapters is capable of covering an area of ​​about 300 m2, although we can later add more nodes to the set if we need it.

The RBKE960 mesh network system currently only appears on the Netgear website for the United States for a price that is not exactly cheap, since it costs about $ 1,500. In addition, each additional node that we want will cost $ 599, being available at the end of this month of October.

Kitsch, minimalist or retro … we select the perfect pots for our indoor plants

what it is for, advantages and disadvantages of its use

Open doors; harmony of styles in this large apartment in Milan

13 deco furniture and accessories in this adorable color

The new autumn collection of Zara Home presented in a luxurious setting, an Alvar Aalto house, an icon of modern architecture

Deep scrubbing, forgetting the classic mop and bucket, is possible with this two-in-one system (which costs less than 20 euros)

A SURPRISING EFFECT OF THE KETO DIET: YOU WILL GET DRUNK FASTER