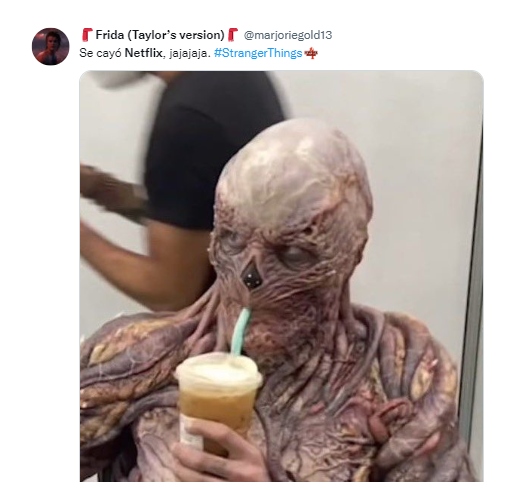 Netflix was not broadcasting for a brief period in the early hours of this Friday, July 1, after the expected release of the last two chapters of “Stranger Things 4”.

According to the global uptime monitoring site downdetector.comuser reports of problems with Netflix intensified around 2 AM, Mexico time.

Complaints about errors entering Netflix or playing its movies and series reached a maximum of almost 13,000 in the hour following the start of the collapse. Variety.

“Stranger Things 4” has already set the record as the No. 1 English-language series on the service in its first four weeks of release, as reported by Netflix based on total hours watched.

The two episodes of Season 4 Volume 2 clock in at almost four hours of total running time: episode 8 is 85 minutes long and episode 9 is 150 minutes long.

Netflix isn’t the only platform that has struggled with successful launches.

Other streaming services, such as HBO Max, suffered interruptions with the end of season 2 of “Euphoria” in early 2022 and the release of the final chapter of the series “Mare of Easttown” in May 2021.

Read:  Users do not protect their personal data on social networks

On the networks, and after Netflix resolved the apparent technical problems, many subscribers to the platform and fans of the series from all over the world went to social networks to tell their experience and share memes with the villain of “Stranger Things 4” , Vecna, as the protagonist. They blame you for not being able to access the service.

“Did someone else’s Netflix crash? I guess there are too many people lined up waiting for volume 2,” one Twitter user wrote. “Vecna ​​laughing at us because Netflix crashed #StrangerThings #Netflix,” another noted. “I stayed up all night to see the end of Stranger Things and Netflix crashed. I feel like a loser,” said a third user of the social network that is about to buy Elon Musk.

Me watching Netflix fell at the premiere of Stranger things 4😭😭😭😭😭 pic.twitter.com/dY2p6VOWAY

Netflix watching how it gives us all a mental breakdown because it fell in the middle of the premiere of Stranger Things pic.twitter.com/RUYfsS38xY

Ronaldo Nazario could attend Sevilla vs. Valladolid in this unique Ferrari

Mario actor did not know they were adapting a game