“Nailed screw” alerts Soriana consumer; he bought hamburger meat and it is not what he expected 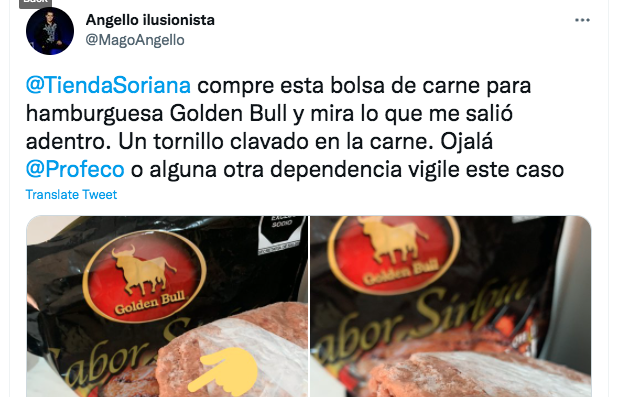 A few days ago, a Soriana consumer was surprised by an artifact he found in the hamburger meat he bought at the store. His complaint, of course, was immediate.

It happened, to be more precise, on February 18, and Twitter was the stage in which said consumer decided to share his claim and ask Profeco to monitor the case.

According to what he relates in his tweet, the user, who calls himself @MagoAngeloshared a couple of images showing a screw stuck in his hamburger meat, which he apparently bought in Soriana.

In a first step to solve this problem, the Community Manager attended the claim, following the necessary protocols for this type of case. Likewise, the Federal Consumer Attorney’s Office (Profeco) recommended that Internet users go to Cofepris to file their health complaint.

In that sense, what the Federal Commission for the Protection against Sanitary Risks (Cofepris) says in this regard, is the following:

“Health complaints are intended to inform this authority of the facts, acts or omissions in health matters, which, according to the perspective of the complainant, represents a risk or causes damage to the health of the population,” reads the report. Cofepris portal.

@TiendaSoriana I bought this bag of Golden Bull Burger Meat and look what came out of it. A screw in the flesh. If only @Profeco or some other dependency watch this case pic.twitter.com/gHHNlhhs5Q

Dear user, we suggest you go with the @Cofepris through, https://t.co/JG6fzkn3GK to file your health complaint.

Whether due to consumer preference or simple convenience, the truth is that, today, Soriana is one of the most popular stores and one of the fastest growing in recent years.

According to information from Statistical, the Mexican supermarket chain Organización Soriana was the second supermarket chain with the largest number of stores in Mexico among the leading companies in the industry in 2019, only below Walmart. Of a total of 810 stores operated by the organization, 380 were Soriana Híper – the format with the largest commercial space.

On the other hand, we must not ignore the fact that today social networks have become a great tool for users and, of course, also for brands.

In an era that is increasingly connected and focused on digitization, it is clear that spaces such as Facebook, Twitter, Instagram, TikTok, among others, will gain even more ground in terms of eCommerce and other useful digital trends for consumers.

In this way, unlike other platforms, Twitter is now that window for complaints and claims where consumers go when something is simply not right.

In the end, the use of social networks is personal and each user is responsible for their words and/or content, but there is no denying the fact that there is a certain “trust” between Internet users due to the immediate interaction they can have with the companies.

It should be noted that these types of cases are not exclusive to Soriana; Previously, a Domino’s Pizza diner claimed that, inside his pizza, he found an embedded watch battery and, even in other tweets, after receiving the response from the brand’s Community Manager, he explained that this was the reason why the one who decided to stop being a Domino’s customer after she ended up in the hospital with her daughters.

And it is that, according to data from the World Health Organization (WHO), they estimate that, annually, more than 600 million people around the world get sick from eating contaminated food; Of those 600 million, some 420 thousand people die from this same cause.

This only reflects the opinion of the consumer and the conversation that it generates in the digital pulse, Therefore, Merca 2.0 requested the position of the brand in order to tell both versions of the story; however, so far it has not been received. The note will be updated in case of a response.