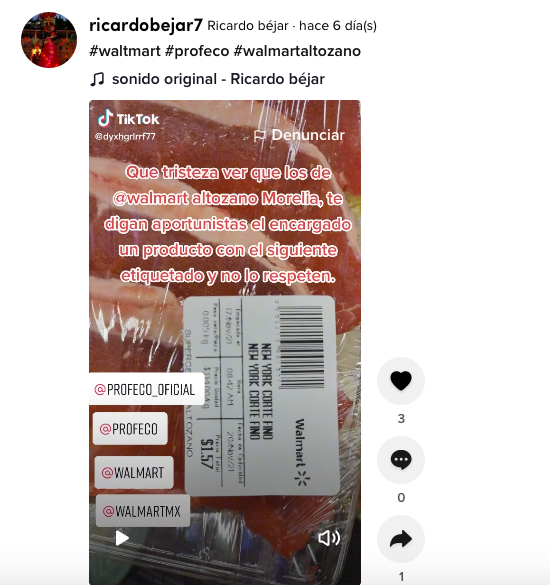 On TikTok, a user expressed his disagreement with the fact that Walmart will label a meat with the price of 1.57 pesos and will not respect the price at the time of payment.

The netizen’s complaint is that the company did not respect the labeling, which, of course, it did not tolerate and decided to expose its disagreement on social networks.

According to the user of the social network, the incident occurred in a Walmart Altozano, Morelia, Michoacán.

In recent days and on the occasion of the Good End, the Federal Consumer Prosecutor’s Office (Profeco) announced that it received 165 complaints and the companies with the highest number of complaints were: Sam’s Club, Walmart and Solaris.

The Walmart chain had 20 complaints, the main reasons for complaints were non-compliance with promotions, purchase cancellation and failure to respect prices.

Another announcement that put the chain in the mouth of the public opinion was the investigation carried out by Tec-Check, where it appears as the self-service shop with the most complaints in the period of January and August 2021.

When the brand mislabels it, it exposes itself to unnecessary risks that can be avoided with the organization and managing the legal requirements applicable to its product; coordinate the marketing, production and quality units in the company, so that the message transmitted on the label is validated and complies with the legislation.

The consumer denounced through TikTok the mislabeling of Walmart and labeled the Federal Consumer Prosecutor’s Office (Profeco) in order to publicize the inconsistency, but so far it has not made a statement. The truth is that if you want to report, the digital evidence already exists.

Read:  ABC in trouble for editing of more Biden interview