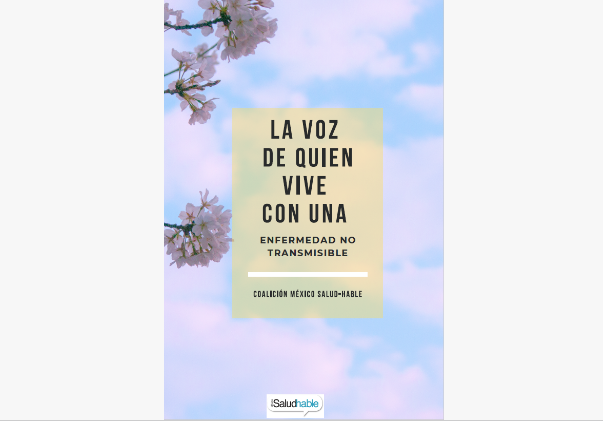 LaSalud.mx.- People living with non-communicable diseases (NCDs) and representatives of the Mexico SaludHable Coalition, at a press conference, presented the texts The Voice of Those Who Live with a Noncommunicable Disease and The Voice and Proposal of People Living with ADHD and their Companions, an anthology of sensitive, critical and stimulating experiences to keep moving forward and give voice to those who go through any of these conditions. The texts speak of the complications faced by those living with any of these diseases and their caregivers.

At the beginning of the conference, one of the participants commented: “I am Isabel, I am 61 years old, I am hypertensive and a cervical cancer survivor, we want our voice to be heard. We want our stories to serve others so that they can have a lighter path when facing a non-communicable disease. We need support and understanding from doctors and the people who live around us. “

For its part, Francis Zaballa Roquero, representative of the chapter of people living with an NCD pointed out that “México SaludHable seeks that people share their experiences to help others along the way. Those who live with an NCD always have something to contribute, which is reflected in these publications.“

“I am a former smoker, addicted to nicotine, I quit smoking 10 years ago, I have COPD (chronic obstructive pulmonary disease) and my parents died from smoking. Most NCDs can be prevented by leading a healthy life, however, those of us who go through these diseases have the right to medicines and treatments, so it is important that we raise our voices and speak out“, he pointed Jaime Barba, a member of the Mexico SaluHable Coalition when giving his testimony.

About your text, Lourdes guzman He talked about his experience as a teacher and about the case of one of his students who suffered from attention deficit hyperactivity disorder (ADHD) and how he had to give him a differentiated treatment because the child learned differently.

Read:  Marco Verratti will miss the Ligue 1 match against Marseille

Also present at the event were Pola Carreto and his son Nicolás who seek to raise awareness of the service dogs that help people with different NCDs and other diseases and disorders. According to these testimonies, these animals change the life of the user and their families, they are highly trained and are not pets, they are trained to be invisible to others.

“Hello everyone, my name is Nicolás and I like to be called Nico, I am 12 years old, I have the autism spectrum, partial epilepsy, ADHD and Turein Syndrome this is my assistance dog, her name is Mica, she helps me with my seizures, for example , when I get angry Mica helps me calm down”, He commented.

Microwave roasted sardines, ready in a minute, odorless and delicious