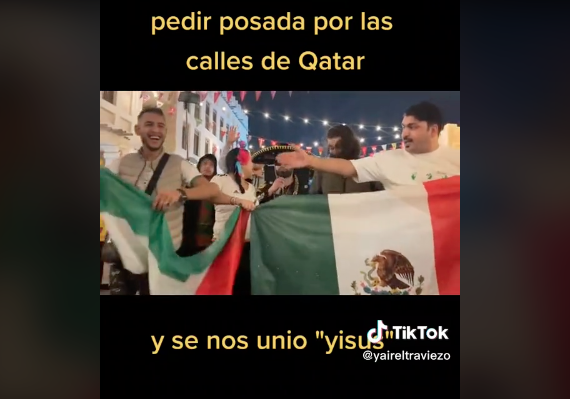 A group of Mexicans who made the trip to Qatar to support the Mexican National Team in the World Cup decided to “take” the streets and hold a typical Christmas posada to the rhythm of “Mi Burrito Sabanero”.

There is no doubt that the World Cup in Qatar, “the worst world cup” for some, became the ideal event for TikTok, the favorite Chinese social network for young people, to show important signs of its reach and power.

And, ultimately, a large investment was made for said event, which led to the creation of stadiums and various infrastructures. According to information from Front Office SportsFor this work, some 220 billion dollars have been allocateda figure very far from what was invested in Brazil 2014 with its 15.1 billion, also becoming the most expensive world cup in history.

On the other hand, we can say that it is also the most viral World Cup, this, of course, thanks to TikTok and the amount of content that was developed over the days and where, by the way, the Mexicans had a great turnout.

Remember that, for the World Cup in Qatar, According to what the Ministry of Foreign Affairs (SRE) reported, there were between 80 and 90 thousand fans who made the trip with the aim of supporting the Mexican Soccer Team on his journey through one of the most anticipated sporting events of the year.

Read:  From going viral to working with Gamesa, this was won by "Edgar" for collaboration

In the end, as is well known, the squad led -at that time- by Gerardo “Tata” Martino failed to qualify for the second round of the tournament; However, what did not stop was the enthusiasm of the fans who came to World Cup lands, even before the initial whistle between Ecuador and the Qatar National Team.

This season is undoubtedly one of the most anticipated by a large number of people. We are talking, of course, about Christmas, which, this year, will be framed by the context of a new wave of Covid-19 infections, the war in Ukraine and inflation that, according to specialists, will not subside until 2024.

For this reason, although it is true that, according to what Picodi points outMexicans spend an average of 368 dollars (about 7,250 pesos) at Christmas time, reality dictates that, due to inflation, there are those who will prioritize their expenses.

However, in Qatar, some Mexicans who are still in World Cup lands continue to make people talk and a video was recently released in which these fans decided to have a typical “posada” to the rhythm of “Mi Burrito Sabanero”.

Yair El Naughty goes out to the streets of Qatar to ask for a posada with @Sonia?Theres only one? and in their wake they are joined by people from all over the world.#Hostal#Mexico#Christmas#qatar#world

Today, the gaze is already set on the year 2026, where Mexico will once again host the World Cup, although now it will share the stage with the United States and Canada.

Of course, it is not yet known how much the initial investment for said project will be; however, Yon de Luisa, President of the Mexican Football Federation (FMF), estimates that the 2026 World Cup will leave an economic benefit in Mexico of 500 million dollars (more than 10 billion pesos) in the rent of the approved stadiums, as well as lodging and consumption expenses of the expected spectators.