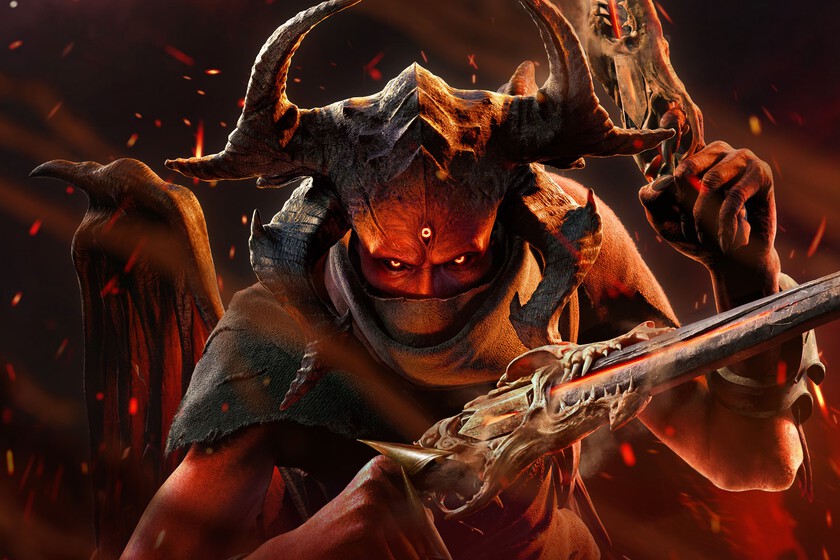 Break down the gates of hell, ravaging everything inside and reducing its brave tenants to a disgusting mash of viscera is a gratifying madness. A glorious experience. Going head-to-head with DOOM Eternal on home turf, on the other hand, is a challenge that’s easy to get shorn of. Metal Hellsingerthe next great FPS from Funcom, has a plan to keep the level of barbarism always at the highest and leave a special mark on the player from game to game: that the hard rock manifest on screen, possess the player and serve as a catalyst for gunplay. And the crazy thing is that it works wonderfully.

The Outsiders, who are shaping Metal Hellsinger, they are not limited to working on the setting in the visual, sound or playable level, but they resort to music, to the game’s Soundtrack, to provide rhythm to the game from the initial bars. And we are not referring to making the moments in which we will end up outnumbered in dramatically adverse circumstances more intense or dramatic, but how we are marked with specific times when it comes to shooting, moving or making spectacular shots. Because Metal Hellsinger is a Rhythm FPS.

The result: Metal Hellsinger rewards players who can keep up with the beats of their music with much more than a grotesque spectacle of explosions and barbarism: pulling off long combos unleashes moments of pure glory in which the base sounds first, then instruments are added and finally the voices of authentic metal legends appear and overlap what happens on screen. Genuinely making Hard Rock fans shake their heads to the beat as they blow up their enemies.


And it is that Metal Hellsinger is a brutal show in each and every one of the meanings of the word. A barbarism with all the letters. But, beyond promoting that we slaughter demons and infernal creatures, what really makes his games so intense and addictive is how he encourages us to adapt not only to what happens on screen, but also to the song that sounds and evolves during our game.

turning into an authentic festival of ultraviolence and heavy metal in the first person, but without losing the perspective of what it should be: a shooter that -without giving up its insane elements- must offer entertainment from its first bars, retain its emotions during the course of the game and, little by little, lead to in confrontations on an apocalyptic scale.

Index hide
1 Heavy Metal Was Created To Turn Hell Upside Down, And Metal Hellsinger Is Proof
2 A rhythmic FPS for PC and the new generation of consoles

Heavy Metal Was Created To Turn Hell Upside Down, And Metal Hellsinger Is Proof

Go through the tutorial Metal Hellsinger It’s not optional, and neither is having a sense of rhythm. Throughout these days Extra Life we have had access to a limited version of it during the last few days and in the second session we began to leave the headphones in place and enjoy their music at full volume from the speakers. Because it’s glorious, of course, but also because it’s what gives his gunplay character. And when you get the hang of it -or rather the rhythm- it’s genius.

The premise shown so far has no way around it: as a strange demonic being we descend to a desolate land conveniently populated by creatures that will jump at our necks at the slightest carelessness. Initially we had a sword and little else, and it didn’t take long to find a powerful shotgun capable of annihilating minor enemies and leaving the not-so-strong ones trembling. Now, the amount of damage and the way to make the most of its firepower does not depend only on our aim, but the moment we fired.

Throughout the game a theme designed specifically for the level we are at plays and gains strength. On the stage of Stygia the instruments of formation sound Two Feathers and the voice of Alissa White-Gluzvocalist of Arch Enemy. However, we will only listen to the latter if we achieve what the game defines as a good rhythmic streak. In other words, a succession of spectacular eliminations following the beats of music that little by little he adds nuances and instruments.

How can we explain this within the game? Well, our enigmatic demon-faced character has his own theory: the underworld has its own rhythm and its pulse is connected to it, so by aligning our attacks – be they with a sword, a shotgun or two revolvers, for example – with the rhythm generates a phenomenon that amplifies its infernal powers. As a result, both the damage generated and the probability of performing an epic finisher skyrocket the more we are in tune with the soundtrack, and in turn it gathers strength, assembles and finally it explodes generating epic moments to the player.

Read:  They recreate the remastering of GTA San Andreas with the DOOM engine

From here it is time to make two obligatory mentions about the gunplay of Metal Hellsinger and the deployment made by Funcon in the face of the musical setting itself.

And what if we lose the rhythm or does it give us to shoot in the style of any other FPS? Well, apart from the fact that we will be losing the essence of the game and that the music will not take off, we will be much more exposed to waves of enemies, we will not be able to make glorious finishes and, by extension, our chances of getting out alive will be drastically reduced.

Just like DOOM, the one from 2016, Metal Hellsinger it inherits the essence and gunplay of the great classics of the 90’s FPS, including its more frenetic and direct gunplay and much less technical. It provides tools that take advantage of its dark fantasy components and takes us to a hell created with a spectacular level of detail. But its great success is how it puts all of the above at the service of its greatest asset and maximum distinctive: its powerful soundtrack.

A rhythmic FPS for PC and the new generation of consoles

Metal Hellsinger He is fully aware of how the FPS genre has evolved, but he is also very clear about the player profile he wants to satisfy: in The Outsiders they focus on the rock lover who enjoys shooters at his own pace, never better said . Those who, as we mentioned, sow destruction while shaking their heads following the rhythms of the Metal legends and delighting themselves reviewing with their eyes the mythical Power Metal or Hard Rock vinyl and CD covers. Those so influenced by artists like HR Giger, Necrolord or Wes Benscoter.

A game that, on the other hand, also knows how to add profound influences from other video game references not so closely related to its rhythmic ginplay and that range from Quake and Heretic a DOOM Eternal, without denying the obvious: it is a more modest project technically and at a presentation level on many levels. But also a video game determined and completely focused on pleasing the passionate and devoted of the wildest Rock.

A double objective that, by the way, has left us wanting more. And not just for listening to its powerful soundtrack! Beyond the playable content, Metal Hellsinger rounds out your experience by recovering something that we had given up as a scoring system that determines how much and well we have known how to squeeze your system of rhythmic combos to generate destruction and compares it with other players.

And we don’t know if it will have multiplayer in the future, probably not, but climbing position in the ranking in the style of the old arcades suits its game proposal very well.

Ahead, very specific doubts, such as knowing if the final content of Metal Hellsinger will further increase the frenzy and emotion of those scenarios in which we have been able to turn upside down or something as simple as the way in which it will be used Next Generation systems: In addition to PC, Funcom will publish the game on PS5 and Xbox Series, and putting the DualSense to good use could be a winning combination.

In any case, it will not be long before we resolve these doubts and continue unleashing the glorious power of rock by pulverizing demons: Metal Hellsinger It will be available throughout this year and in The Outsiders they not only threaten to test our dexterity with our thumbs, but also leave our necks destroyed by shaking it.