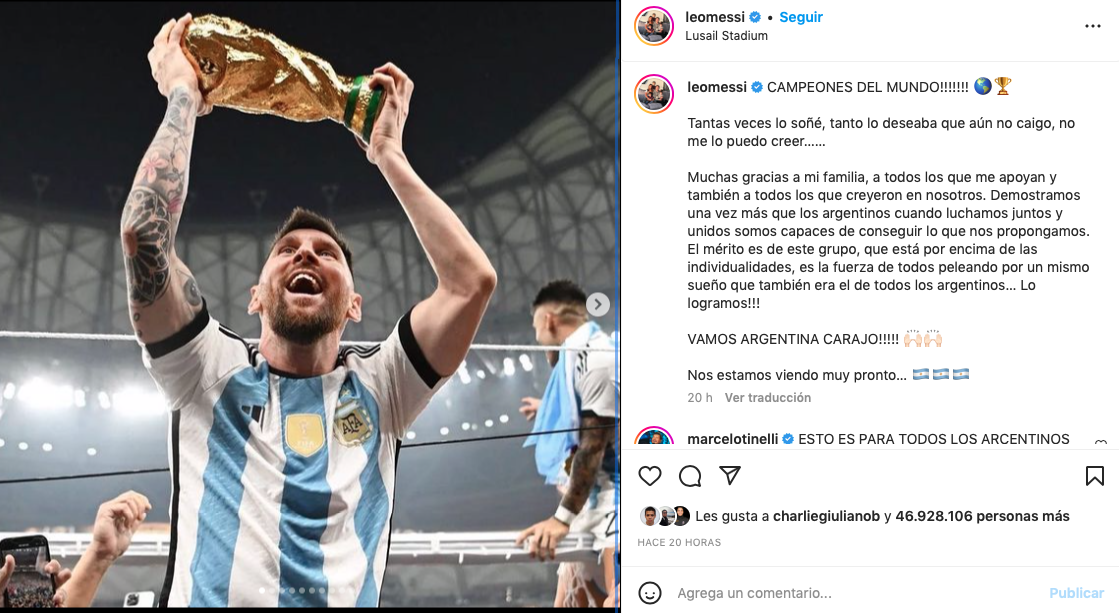 Social networks have become the best tool in today’s world, which is why various records have been recorded in these spaces as well. This Sunday Lionel Messi won the World Cup with his Argentina team, and the footballer broke various records on the field, but also in the digital world after a post he recorded on Instagram.

According to a report made by We Are Social and Hootsuiterevealed that there are currently 4 thousand 620 million users of networks worldwide, representing a year-over-year growth of more than 10 percent.

Given this, it is normal to see that In these tools you can find profiles of everyone, from brands, companies, politicians and even public figures.

Messi and his world record for this publication

For football lovers, what happened this Sunday, December 19, was one of the most important dates, where Lionel Messi was crowned world champion with Argentina.

But after breaking several records on the field, the albiceleste, holder of the ’10′, published a photo on social networks that It already has more than 43 million likes, making it the publication on this social network with the most likes by an athlete in history.

“Thank you very much to my family, to all who support me and also to all who believed in us. We prove once again that When we Argentines fight together and united, we are capable of achieving what we set out to do. The merit belongs to this group, which is above individualities, it is the strength of all fighting for the same dream that was also that of all Argentines… We did it! ”, wrote La Pulga.

The photo that Messi uploaded of his victory with the World Cup in Qatar is iconic, since it imitates the image he left Diego Armando Maradona after his coronation in Mexico in 1986.

Read:  Edy Art World: the most geeky decorations for your Christmas tree

This image quickly became one of the most ‘liked’ posts in the history of the social network, Meta, clearly surpassing its own previous mark, when the player published a carousel with various images after beating Brazil in the 2021 Copa América at the mythical Maracana stadium.

Likewise, among his records on the Internet, the footballer also published a photo that has 32 million views. ‘I like it’ which is starring him or Cristiano Ronaldo, in a collaboration paid for by the Louis Vuitton brand.

With this new publication, Messi surpasses the photo with more Instagram ‘like’, which is an egg, uploaded by the @world_record_egg account on January 2019. At the time of publishing this article, it has 56.2 million Likes.

Let’s remember that this account was created with the sole purpose of becoming the Image with the most Likes in history. And he did it in just 9 days, but not only happy with breaking the record, the image (at the time) almost tripled to second place in the ranking (a photo of Kylie Jenner).

And this is how social networks continue to play a great role in the whole world, crossing barriers all over the world.

Elon Musk will leave Twitter if he keeps his promise to users; he loses his own poll