Mercado Libre joins the Argentine party with this campaign 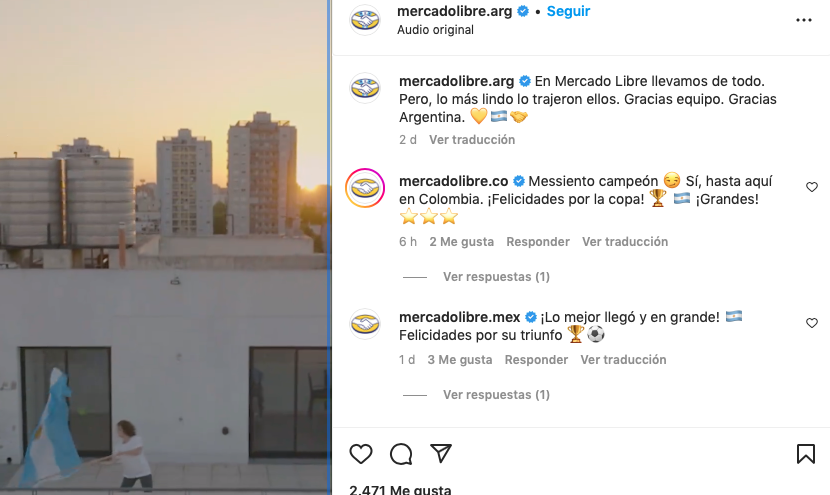 Advertising plays a very important role in our lives, and especially when it comes to celebrating a brand achievement. On the occasion of the victory of the Argentine soccer team, Mercado Libre stood out in its new advertising campaign.

This year there are many brands that They created good publicity campaigns to promote or even exalt an action in society. Given this, advertising is defined as any form of communication carried out by a natural or legal person, public or private, in the exercise of a commercial, industrial, craft or professional activity, in order to promote, directly or indirectly, a product or service.

The importance of this industry can be seen reflected in advertising spending in the global market, where a study conducted by eMarketer, It highlights that this industry generates millions of dollars, and around 516 billion dollars are spent annually on advertising in the media.

Likewise, data from Zenith show that North America is the main focus of investment in the sector, where the United States alone is the largest advertising market in the world, with spending that exceeded 240 billion dollars.

With the creative help of the Super agency, the e-commerce magnate Mercado Libre celebrated the world championship with a commercial dedicated to all Argentines and especially to the National Team.

The campaign, which is called “The best came”, rotated with a spot on TV, Digital and Social Media on social networks TikTok and Instagram, where Mercado Libre gives the team the leading role and manages to be linked to the daily life of each fan as an ally who silently accompanied us to continue supporting throughout the World Cup.

Given this, the agency develops a strategy, creativity, with media, data, social, UX, content, innovation and BTL, with various talents from all over Latam, based in Mexico, USA, Peru, Argentina, Colombia, Chile, Brazil, Uruguay and Spain.

The campaign registers a total of two thousand likes on the Instagram social network, and various comments from Argentine fans.

And this is how advertising campaigns can share an important message from any event that is registered in the world, As an example, it happens when the Super Bowl approaches, which is one of the most important sporting events also for the marketing industry.

As an example, this year, there were many ads and campaigns from the brands that referred to the sporting event.

And this is how advertising continues to be the best communication tool for everyone, especially for brands and companies.