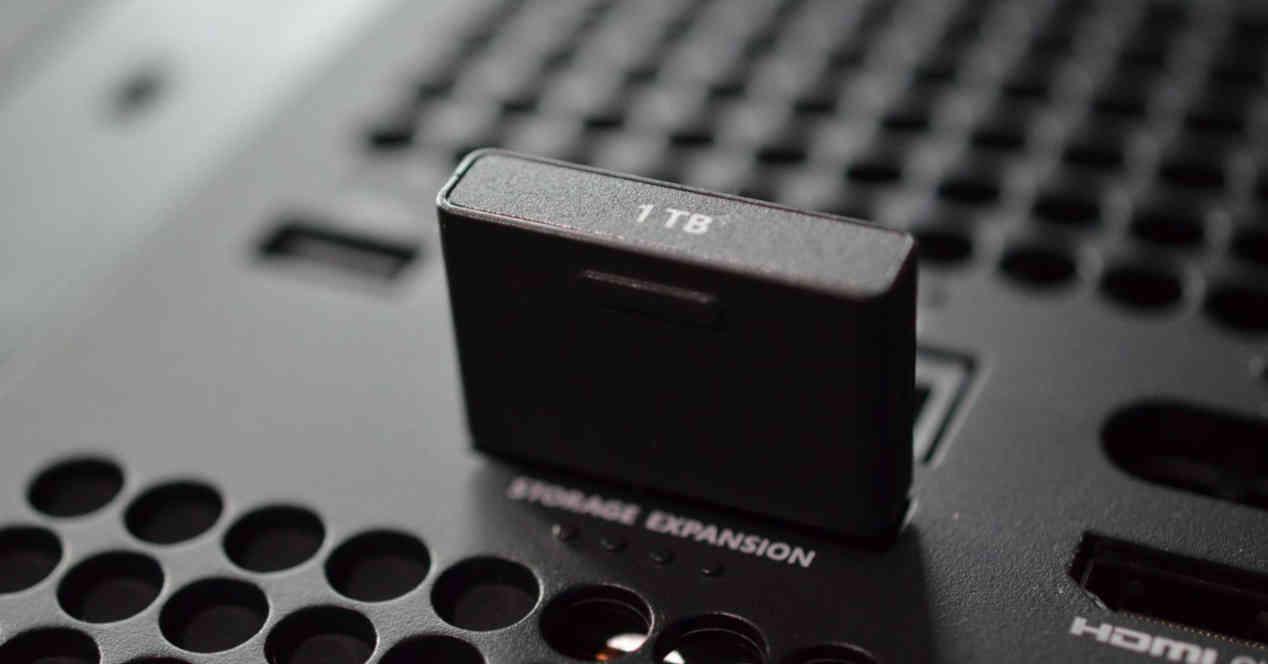 The new generation consoles have opted for the use of NVMe SSD units to store games, but in the face of memory expansion the two brands have not agreed, since Microsoft with its Xbox has opted for proprietary expansion cards . However, there is the possibility of opting for a lower cost alternative that we are going to talk about in this article and in passing this will help us to explain how the external storage of Xbox Series consoles works.

If we want to expand the storage capacity of our Xbox Series X or Xbox Series X, we need to buy a custom or personalized expansion card, which does not mean that they make us a custom one, but that there is only one model and Microsoft controls the price from the same. The reason for this is very simple, consoles are sold bordering on losses and manufacturers recover the money in two ways: with game royalties and by selling certain accessories at a premium such as Xbox Series X storage.

But what is special about being expansion cards? They are really CF Express cards with a proprietary terminal to be connected to the storage expansion port of the Xbox Series S and Series X consoles. This connector is proprietary and therefore its specification is not officially documented, although there are already experts who based on Reverse engineering has found that it is a PCI Express port, but with the pins arranged differently so that standard NVMe SSDs cannot be connected.

The reason why this was possible discovered is due to the fact that for storage purposes, the Xbox Series X makes use of a four-lane PCI Express interface that is subdivided into two two-way paths. The first of them is used by the internal SSD installed in the console, which is exactly the same as the external one, only without the plastic casing, as it is not necessary. While the second is for the storage expansion port.

CF Express cards, Compact Flash Express, are a type of memory expansion cards that are the evolution of the already disappeared in the market expansion cards with the same name except for the final word. Its name comes from the use of a PCI Express interface, usually between 1 and 4 communication lanes. So for all practical purposes they are the equivalent of an M.2 NVMe expansion card, but in the form of a memory card.

Compact Flash cards were used with DSLR-type cameras, but little by little they were replaced by the SD format, but the need for faster bandwidths, especially in view of storage for 4K / 8K video or even HDR in Professional video cameras end up creating the need for a new memory card format.

Read:  The new mid-range Intel CPUs are not (at the moment) for you

Well, Microsoft has opted for the CF Express type B for the storage of its Xbox Series, but with an important difference when using PCI Express Gen 4 the cards on the market are not compatible with the Xbox console as they cannot transmit the signal with enough speed, in addition to having some differences with the Memory Cards of the Xbox Series S and

So if what you are looking for is to be able to connect a CF Express as an Xbox memory card, not only will you not have a sufficiently large bandwidth, but they are also extremely expensive, since they use NVMe memory chips that have exceeded the more demanding tests and therefore fewer are available. Instead, Microsoft’s design allows them to use standard chips and thereby reduce costs.

Alternatives to the Xbox Memory Card

Officially there are none, but once we know that the interface is a modified CF Express, which in turn is a variant of PCI Express, so logically we only need to connect a converter to NVMe like the one you see in the image above, yes, the NVMe M2 has to support 4th generation PCIe.

And the reality is that using this type of adapter the console reads the unit without problems, so it is an excellent way to save money when buying a Memory Card for our Xbox consoles. In addition, because the Microsoft console is designed to use a lower bandwidth than that of PS5, it is compatible with a greater number of NVMe PCI Express SSDs, but in any case, as there is no official support, we cannot know what they are. 100% compatible and which ones are not or give problems.

khaki green pants go well with all your summer looks