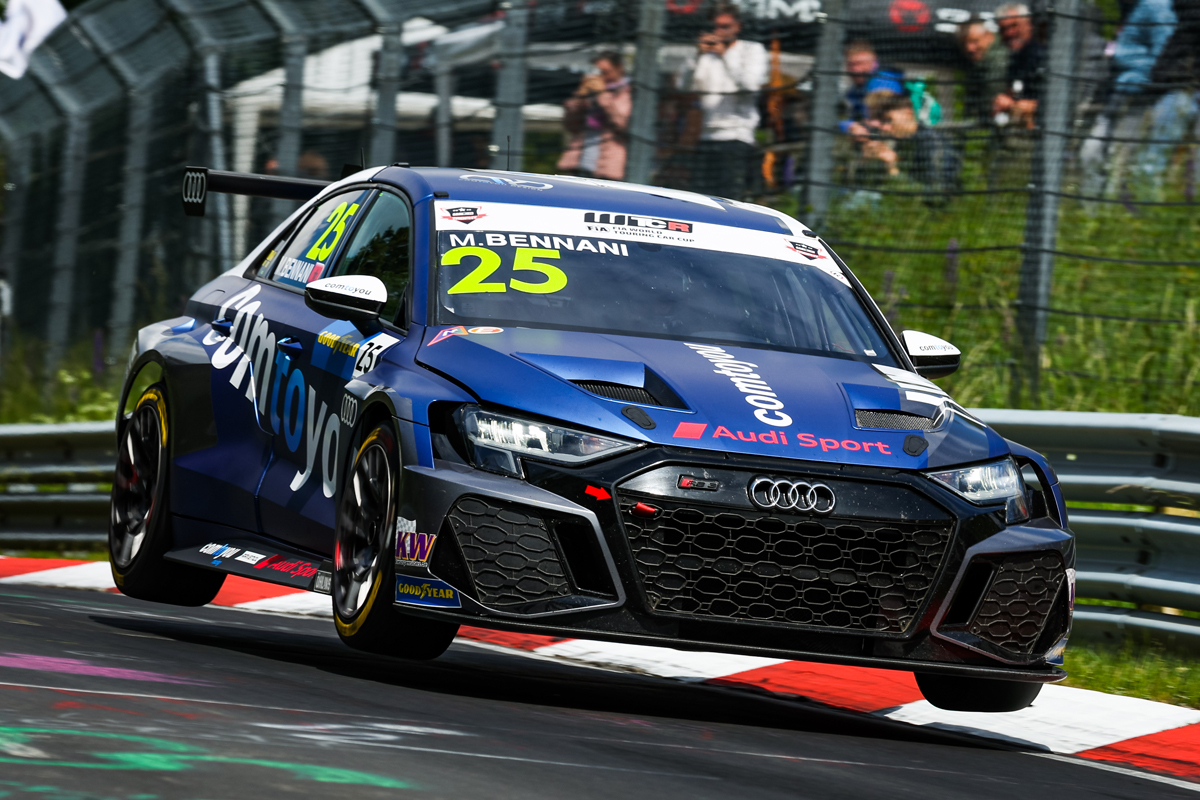 The Moroccan Medhi Bennani has conquered the pole position of the WTCR at the Nürburgring Nordschleife after signing a tremendous lap in 8:50.527. The Comtoyou Racing driver took advantage of the slipstream from his teammate Gilles Magnus to beat the Belgian by 15 thousandths and lead the Audi TCR 1-2. Frenchman Yvan Muller will start first in the reverse grid race after finishing tenth in a classification that ended with Rob Huff’s accident. Tire problems continue to generate great doubts in the WTCR paddock and even Muller is considering not competing.

The qualifying session started late, specifically 20 minutes. However, she did it with just cause. Before the punctures and delaminations of the tires in the free, the WTCR decided to offer an additional test session to test tires from a different manufacturing batch. With this previous session, in which the slicks and the rain tires were mixed due to the previous rainfall, the gun was fired at a classification disputed in a single session of 40 minutesin which all eyes were, of course, on the tires.

Nevertheless, the punctures ‘mutated’ in strange breakages and ‘bursts’ of the aerodynamics of the Honda Civic Type R when driving at high speed. first it was Attila Tassi the one who lost the right wheel arch of his car when he was fighting for pole. Later the same thing happened to Néstor Girolami, although in this case another part of the body was raised. Despite everything, both managed to set a good pace for sneak past the Lynk & Co pilotsdominating the time table for much of the session.

However, when the moment of truth arrived, the classification veered towards the interests of Audi. After crossing the finish line seconds before the checkered flag, Gilles Magnus launched himself into the roller coaster of the ‘Green Hell’ in a thrilling lap that took him to pole position. Of course, it lasted just a second, how long it took his teammate Bennani to cross the finish line behind Magnus to sign the decisive 8:50.257. The two Comtoyou Racing drivers thus occupied the first row of the grid after beating Santiago Urrutia and Yann Ehrlacher.

Despite straight line speed issues, Mikel Azcona managed to sneak his Hyundai Elantra N TCR in fifth position, just ahead of Thed Björk and Nathanaël Berthon. Néstor Girolami finished eighth after the aforementioned problems in his car, while Norbert Michelisz was the ninth classified. For its part, Yvan Muller closed the ‘top 10’, a result that allows him to start first in the inaugural race for the inverted grid concept. However, it is not clear that Muller will race after today’s tire problems. The Frenchman has left it up in the air.

2022 WTCR Qualifying Results at the Nürburgring