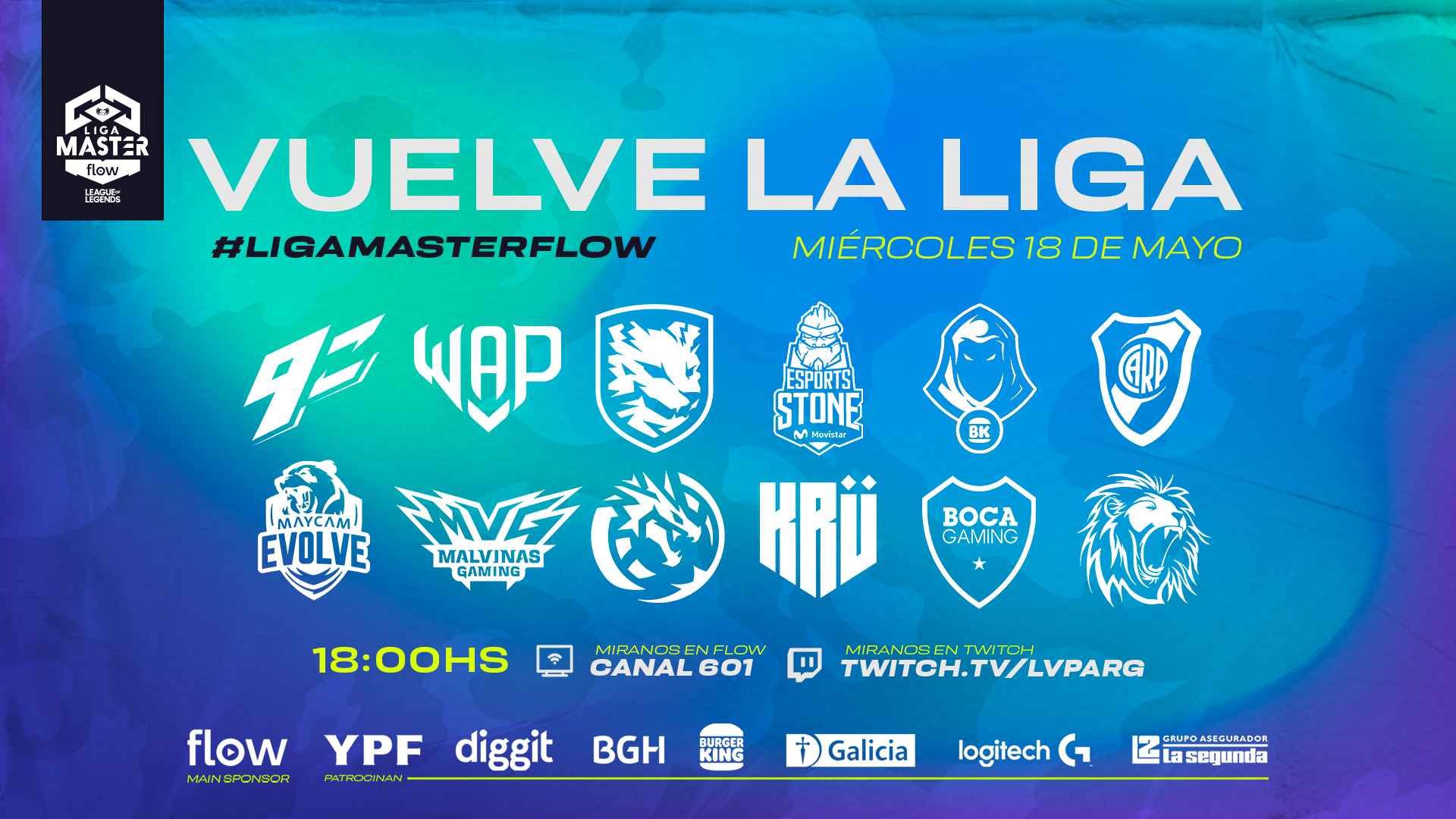 Index hide
1 The second split of the League of Legends tournament of the Master Flow League has started and we will tell you all the details about the rosters, dates and more in this note!
1.1 The Rosters
1.2 First day and next meetings
2 Share it with whoever you want
3 Related Posts

The second split of the League of Legends tournament of the Master Flow League has started and we will tell you all the details about the rosters, dates and more in this note!

The second split of the League of Legends tournament of the Master Flow League began and the 12 rosters began the battle for the championship. However, the teams arrive with some changes in their ranks and only Pampas kept all his players, while the champion EBRO tweaked the mid lane and Leviathan Esports changed the majority.

After a surprising start in the Apertura, Boca Juniors Gaming just keep your mid lane Chordy. In the top lane entered Sunblast, in the jungle Shookz after a split in River, hika as a shooter, after the exit of Krim, Y Shmebu will complete the botlane.

After being left out in the first round of the playoffs 9z Team he changes his entire squad in search of results for the Clausura. slicked will occupy the toplane, the jungler will be isaN, the middle lane will be the experienced regi, while the bot lane will be shared by Nnicky Y LTZeta.

“Winning team does not touchresounds within EBRO that keeps almost all of its squad facing the Clausura. On the one hand, agustin17 will replace in mid a Nobody who emigrated to the LLA, and on the other, Akunma, Ocean, TomnaM Y Nottingham They remain to seek the bi-championship.

After failing to make the playoffs with a team full of stream personalities KRU renew the project. The new team is Seeker Style, arrived from the LLA Kiefer, Lack and one of the opening revelations IgnaVillu.

🔥 WE ALREADY HAVE LOL ROSTER FOR THE SECOND SPLIT! 🔥 pic.twitter.com/fRRxFsbxAv

Leviathan doubles the bet after the runner-up in the Apertura and only top lop in mid, and Nothing as a shooter they remain. the recognized buggax enter as a toplaner, accompanied by Pancake from the LLA that returns to the jungle and lyonz as support.

To get to the playoffs Falklands changes most of his team while Fersite Y Nekhazten they are conserved. Koppobah will be the top starter, with Rod like jungle and blood shooter

Read:  Master Chief returns to Fortnite to celebrate the launch of the game on Xbox Cloud Gaming

Pampas will seek the championship again with no changes to its roster. The foxes will play with izaenk as top lane, Follow jungle, deceive, and the botlane will be shared Kindles Y QQMore.

Around Aquasonic and Dandy River, he bets on improving his participation in the playoffs and retouching his squad. Xypherz will be the new jungle, with Horus arrived from Xten to the bottom lane and will be joined by Keishao.

Despite a good campaign in the regular phase, Stone Movistar he changed the entire squad for Clausura. Thoryn on top, with Go in the jungle, kobra midalner, iGeveze Y why not to the bot lane, they enter the golems.

After watching the playoffs from the outside Undead B.K. conserves stranger in the mid lane and renew the template. GianKios joins the undead, along with born, whileKumew Y Kbstible complete the bottom lane. Puentinho, KinGi, Daedra, Peep Y creator will represent the pandas. At the same time Sydux, Aug, Doni, Sebbek Y Manuize they will in WAP.

First day and next meetings

The first day of the League of Legends Clausura Tournament took place on Wednesday May 18 and the winners were: Pampas, KRÜ Esports, Undead BK, EBRO, River Plate Gaming and Maycam Evolve.

TODAY IS THURSDAY OF GOOD LOLCITO 😏🔥

The matches will be transmitted from the 6:00 p.m. Argentina by Flow Gaming (channel 601 Flow) and the official channels of LVP Argentina in Twitter Y Youtube. The second day will be today, Thursday, May 10, and the teams that will face each other first will be Malvinas Gaming and Boca Juniors Gaming. For 7:00 p.m. we have Maycam Evolve vs Undead BK, then 9z Team vs Leviatan Esports, Pampas vs EBRO, KRÜ Esports vs River Plate Gaming and closing the date WAP Esports vs Stone Movistar.