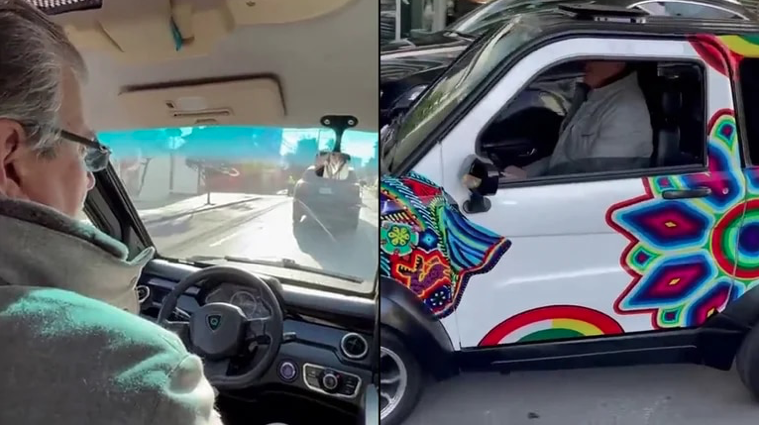 The future in which electric cars reach many parts of the world is getting shorter. This Friday the Mexican Foreign Minister, Marcelo Ebrard surprised everyone after posting a video on his Twitter account where he can be seen driving an electric car of Bolivian origin through the streets of La Paz, thus announcing that the production of this model will arrive in Mexico in 2023.

Due to the growing environmental awareness, today there is a strong boom in the use of electric vehicles, where Europe and the United States are the markets that lead this type of technological development, which is why the greatest use of this transport model is recorded.

Data of a study conducted by EV-Volumes.comin 2021 sales of this type of alternative vehicle approached all 6.8 million units worldwide, where consumer spending on electric vehicles amounted to approximately US$250 billion. For its part, government investment in this type of alternative automobile during that same year was around 30 billion, according to data from a study identified as Global EV Outlook 2022, carried out by the IEA.

Although manufacturers in this industry have names like Chevrolet,Hyundai,Volkswagen,Renault,Peugeot,Kia,BMW, among others, the peerless leader is Tesla. The Tesla Model 3 was the best-selling electric vehicle in the world in 2021, with sales of more than 500,000 units, it indicates the ranking made by Inside EVs.

Through a video on the social network Twitter, Foreign Minister Marcelo Ebrard, who is visiting Bolivia, showed how he drove an electric vehicle of Bolivian origin through the streets of La Paz.

He then announced that its manufacture will arrive in Mexico on a large “scale” in 2023. Likewise, he gave details that this project, in addition to the automobile, also includes the manufacture of lithium batteries taking the Bolivian experience.

Bolivian vehicle Quantum, electric. Available in 2023 in Mexico thanks to the Quantum Alliance and the Mexican company Industrial Power. It will be the cheapest electric vehicle in our country. Congratulations!! pic.twitter.com/CFsVVBxpdV

Let us remember that Mexico is in tenth place among 23 countries with certified lithium reserves, which means that it has two percent of this mineral. According to the United States Geological Survey (USGS), All the projects in the country for the exploitation of lithium are still in the exploratory phase, although the Sonora mine is the most advanced.

Foreign Minister Ebrard tested the Quantum E3 electric model, in the video he posted on his account on the little bird’s social network, from which he highlighted some aspects “Like its excellent suspension and internal space.”

Likewise, the diplomat also highlighted his colorful pattern on the sides with Mexican and Bolivian allusions; that contrast on two shades of white and a black roof.

“It is a Bolivian company and this company is linked to the idea that Bolivia’s intention is not only to be a lithium producer. His idea is that lithium be national property, that the largest possible section of batteries be processed in Bolivia and even produce vehicles here “said.

The Foreign Minister also boasted that Mexico is “number six in the world in automotive exports”, so they have many opportunities in this area,

In this sense, the diplomat mentioned that the electric vehicle sector is going to have exponential growth, since Mexican regulations establish that by 2030 a large part of its fleet must be electric.

“Bolivian vehicle, Quantum, electric. Available in 2023 in Mexico thanks to the Quantum Alliance and the Mexican company Industrial Power. It will be the cheapest electric vehicle in our country. Congratulations!!” he announced.

It is worth mentioning that Marcelo Ebrard traveled to Bolivia to meet with current President Luis Arce and former President Evo Morales.

Marcelo Ebrard publishes his WhatsApp number and is wrong