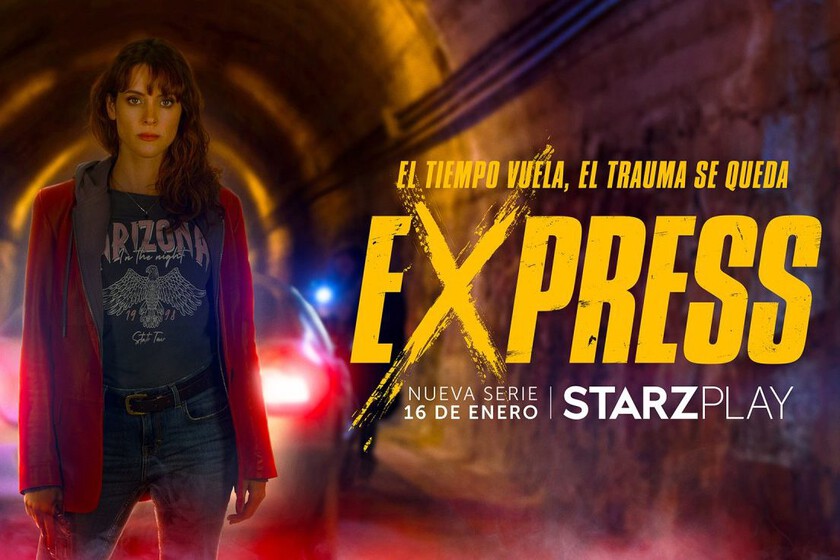 all the big ones streaming platforms sooner or later they end up having their first Spanish series. It is a logical bet, either because our market is its main source of income or because the commitment to internalization has proven to be a good move.

Today January 16 is Starzplay which follows that path with the premiere of ‘Express’, a new production by The Mediapro Studio created by Ivan Escobar, one of the authors of ‘Vis a Vis’. I suspect that had its weight for Maggie Civantos heads the cast of this fiction set in the world of express kidnappings, hence its title, intense in its approach but uneven in its content.

‘Express’ plays at being two different series at the same time. On the one hand we have a structure closer to the procedural with the protagonists having to solve what is still the case of the week. Of course, seeking a greater sense of urgency with the constant search for a sense of fight against the clock to get it.

That is perhaps what is most striking in the first instance, since it leads to ‘Express’ starting strongly and that the first episode is the most interesting of the four to which the press has had access, since they are so noticeable the means you have to get a powerful technical invoice and a more international look. Until now, an unusual technological factor is used in this type of production that helps create its own universe that helps the series have a little more of its own voice.

However, the cocktail between the traditional and the modern does not end up coming together, either due to lack of filming or because there is simply something that does not quite fit. There you can see the concern in offering differentiated characters to avoid the dreaded repetition, but at the moment of truth only Maggie Civantos get to stand out.

On that side I am clear that the fact of being the character with a richer background and whose personal life has more weight in the series is essential for it. And that is because of that most intimate side is where we find one of the great weak points of the series, since the subplot of his daughter is deficient, even having some of those moments in which disbelief seems the only way to react. before what happens.

It is clear that she is there to give more weight to the personal plot of Civantos’s character and that it will have consequences later on -everything points to an emotional collapse due to the similarities with the past that she herself experienced followed by a great professional exhibition-, but it ends up being one more proof that ‘Express’ He has good ideas, but he doesn’t put them to good use.

On the one hand, the staging efforts to give the series a vibrant rhythm are noticeable, that the images always have the necessary nerve to enhance what they are telling us, but then the story does not accompany. Professionally, everything feels more schematic as the episodes go by, including that romantic subplot between two characters on the team that has a clear function of lightening the prevailing tension a bit.

It is a pity that it is so, since ‘Express’ fully enters into a very specific type of crime that in Spain sounds like something almost unknown, hence it is more disappointing that it ends up sounding too commonplace seen in other fictions. There it would have been better if it was noted that it is a Spanish series, something that often ends up being almost circumstantial.

It often seems that what really matters is the rhythm, that the thing never declines to take the viewer on the wings once you have caught him, but what happens when you never get to hook him completely in the first instance? Well, you have many stimuli, because you go from action to drama or suspense with a certain agility, but none manages to shine consistently.

‘Express’ has striking ingredients, a vibrant rhythm and an effective performance by Civantos to dramatically sustain the series, but it never quite puts the pieces together, in part because some simply don’t work, and the contrast between the almost futuristic look and its narrative is both conventional – there are certain deviations, yes, but deep down it has a lot of a case of the week series – it creates curiosity at first but then it feels too traditional. Still, better take a look.