Luis Gerardo Méndez reveals that he worked at Walmart “to survive” 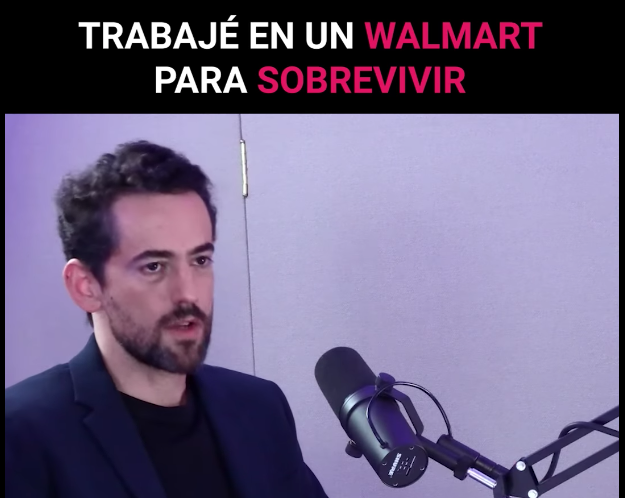 Being a guest on Juanapa Zurita’s podcast, actor Luis Gerardo Méndez revealed that, at some point, he worked at Walmart “to survive.”

The podcast trend continues to grow by leaps and bounds, which, according to data from the PwC Consulting, is estimated to reach 974 million listeners globally.

Nowadays, even one of the formats that has begun to attract attention is the video podcast, where, in general, in-depth talks are held that leave a lot of loose data for the listeners.

Starting from this trend, not long ago the actor and content creator, Juanpa Zurita released his own audio episodes under the name “Don’t do the Easy”which is broadcast through Spotify and has had guests such as Danna Paola, Donovan Carrillo, Arturo Elías Ayub, Luis Gerardo Méndez, among others.

And it is precisely the latter Luis Gerardo Méndez, one of those who has most attracted the attention of users on social networksmainly on Facebook, which is where the clips of various chapters have been shared.

Luis Gerardo Méndez reveals that he worked at a Walmart, in CDMX

A few days ago, the episode came out with the actor who gave life to “Javi Noble” in the film Nosotros Los Nobles, one of the most viral characters in recent years.

During the talk he had in Juanpa Zurita’s podcast, in addition to talking about his experience and how he has coped with his career, Luis Gerardo Méndez

Read:  The leader of Los Enanitos Verdes dies and "Bolivian Lament" is a trend in Mexico

In one of the clips that can be seen on Facebook, the actor tells how his arrival in Mexico City was and the jobs he had to do to survive.

“I designed a plan to go to Mexico City to study acting,” says the Club de Cuervos actor. “When I came to Mexico City, I told my parents that I was going to support myself. In the mornings, he studied Marketing at Tec. De Monterrey and in the afternoons he studied acting. What happened was that my money began to run out and I had to do everything, ” Luis Gerardo Méndez told.

Later, he added that, to survive in the country’s capital, he came to work at a Walmart, at a stand where samples of a package of instant rice were offered.

“There was a rice called ‘Arroz Verde Valle’, an instant rice to which you put water and it was ready in five minutes. I used to go to Walmart, there was a stand where he prepared the rice and he was offering it for testing in the afternoons”, revealed the actor.

Similarly, he said that another job he did was in a club at night, where, wearing a purple leotard, he offered consumers shots of a brand of vodka that, according to his words, no longer exists.

So far, the clip of just over three minutes has 441,000 views and, as expected, has sparked several comments from Internet users.

“There is no doubt that God chooses his best warriors for the worst battles…”; ” What a good road traveled, to always keep you located”; “Oh, what a laugh… Privileged people making fun of the fact that she did everything to live and still says that she cared for Mirreyes (her friends from Uni)”; are some of the comments that can be read in the publication.