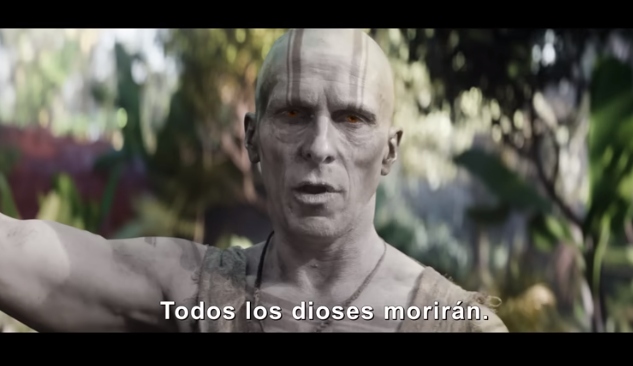 The new trailer for the imminent Marvel movie “Thor: Love and Thunder” comes with surprises: for example, now It is already known who will be the villain of the film.

This is what fans of the Marvel Universe are talking about on social networks.

Thor’s villain is Gorr, also known as “the butcher of gods.” The actor: a heavily made-up Christian Bale.

The full trailer was presented with a private marketing strategy: during Game 4 of the NBA Eastern Conference Finals between the Miami Heat and the Boston Celtics.

The trailer was then uploaded to Marvel social media across the world.

The Marvel film, directed by Taika Waititi, is the sequel to 2017’s “Thor: Ragnarok” and marks the return of Thor to the Marvel Cinematic Universe after 2019’s “Avengers: Endgame”.

The film stars Chris Hemsworth in the title role and features Tessa Thompson as Valkyrie.

Chris Pratt is Star-Lord, Waititi is Korg and Natalie Portman as Jane Fosterin his first appearance in the Marvel Universe since 2013’s “Thor: The Dark World.”

In 2020, Portman revealed that the film would show Foster battling cancer in his human form.

Waititi called the film “the craziest thing I’ve ever done,” hinting that it will include many fan-favorite plot points and a love story.

Read:  Mercado Libre makes this blunt decision regarding the sale of fake iPhones

The new Marvel movie opens on next July 8.

Another novelty that the trailer shows is the performance of Russell Crowe as Zeus, in a role that will allow Greco-Roman mythology to be combined with Norse.

One issue will continue to divide fans: the comedic tone that is still present in the new Thor movie.

The Simpsons: Hit and Run are getting closer to their remake, although you probably can’t play it