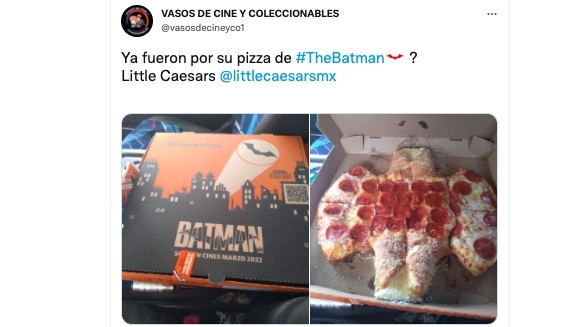 Little caesar’s has announced the newBatman Pizza” to join the promotion of the new superhero movie.

For decades, the comic book superhero industry reached the hands of consumers around the world and of all ages, offering amazing stories about fictional characters who manage to stand out from our reality, thanks to their heroic deeds where on more than one occasion they have saved the world.

Although these have been present in our daily lives for some time, in recent years these characters have managed to be the protagonists of endless films and other articles of merchandise, where hundreds of companies find a good opportunity to increase their sales by adopting their image.

Among them, the population has proven to have their favorites, mainly from two specific companies, Marvel and DC Comics. According to a study conducted by Game where it shows the world’s favorite superheroes through their Google searches, spider-man is the most sought after with a preference of 57 countries, then it is found Wonder Woman with 15 countries, in third Batman with 11 countries, Iron Man with 10 countries and Superman with 6 countries, among other well-known comic characters.

The superhero favoritism It has caused that today almost any film of this type manages to attract the attention of viewers around the world, as the recent integration of Shang Chi and the Legend of the Ten Rings showed; However, those deliveries of already recognized superheroes continue to surprise the world of entertainment with their appearances and over the years.

For some years now, DC fans have received the news that a new batman movie was to be produced, where Robert Pattinson would be in charge of bringing a new Bruce Wayne to life, a delivery which is already making the necessary alliances for its effective launch promotion in 2022, this time with Little caesar’s.

Batman Y Little caesar’s they made a new collaboration to promote the premiere of the new superhero movie with a somewhat peculiar strategy, the creation of the “Batman Pizza“, which has the design of the bat in said star dish of the brand, where users on social networks have shown opinions of all kinds.

They already went for their pizza from #TheBatman ?
little Caesars @littlecaesarsmxhttps://t.co/XLdN7hkziC pic.twitter.com/8XOErMsXJY

They already went for their pizza from #TheBatman ?
Little Caesars.
The idea is cool, but they would have better made a design that didn’t look like a feminine towel 🩸 pic.twitter.com/qHI0Y6fqpU

They must be kidding. #TheBatman #little Caesars pic.twitter.com/ukWJ0J0SAy

The new one “Batman Pizza” from Little caesar’s It seems to have surprised more than one user by leaving aside the classic Italian and circular aesthetics of the saucer; however, the creativity in this has managed to attract the attention of Internet users, proving to be an effective strategy.

Read:  Motorola unseats Samsung in sales in Mexico and this is the reason

Various cinematographic deliveries carry out different strategies of publicity and promotion months before the release of their films, where those brands that offer food and beverages have managed to play a fundamental role in their effective positioning, thanks to the relatively simple actions with which this can be achieved.

Whether it is through the sale of some toys, as we have seen for years with McDonald’s and Burger King in their children’s packages, or a change in the packaging design of some products, as well as the design of Pepsi cans with the image of the new installment of Spider-Man: No Way Home, companies that offer food and beverages have a good opportunity to reach due to their numerous points of sale where they can offer this type of product, resulting in a considerable promotional alternative for this type of deliveries.

great discounts on gaming products for a limited time