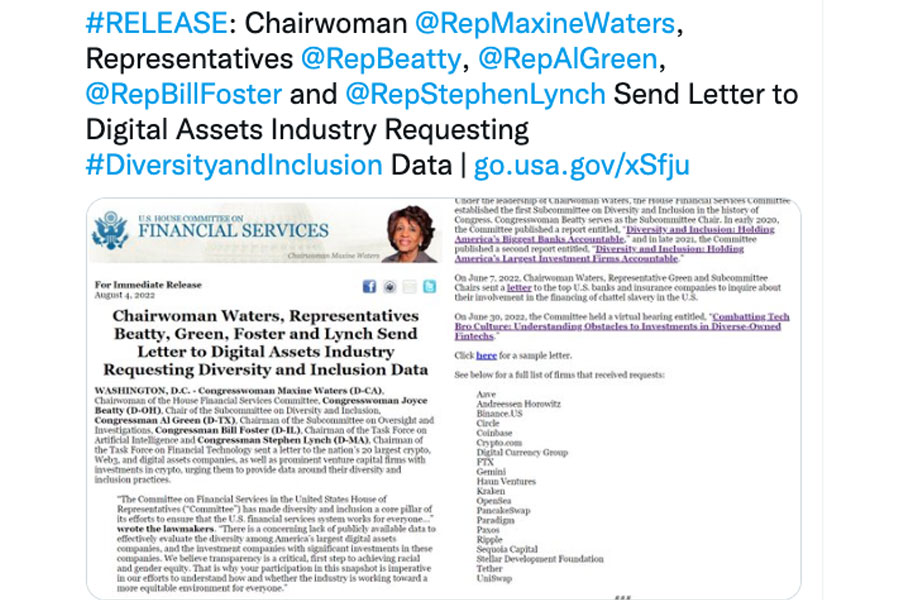 A group of five lawmakers from the United States House of Representatives have requested data on the diversity and inclusion practices of 20 major companies dealing with cryptocurrencies.

In a notice Thursday, the chair of the House Financial Services Committee, Maxine Waters together with the representatives Joyce Beatty, Al Green, Bill Foster and Stephen Lynch wrote a letter asking cryptocurrency companies for inclusion and diversity policies within their work environment.

Cryptocurrencies are a type of digital asset that use cryptographic encryption to guarantee their ownership, as well as to ensure the integrity of the transactions and control the creation of additional units, which have drawn the attention of millions of people and businessmen, since they are not physically located, but that are stored in a digital wallet.

Similarly, these are not regulated or controlled by any institution, so intermediaries are not required to carry out their transactions, becoming an attractive investment for those who seek to give lower commissions.

These kinds of features have made cryptocurrencies are also called as “the money of the future”since its value also remains the same, regardless of the country where it is located, which would allow the purchase and sale of all kinds of products and services like any other currency, but from the digital world, which is where the Global economy.

Cryptocurrencies, a strong bet for industries

In this sense, one of the main trends of the new reality is betting on value, digital either through NFT’s or cryptocurrencies, this due to the integration of the new digital normality.

In recent months, cryptocurrencies have suffered a sharp fall, losing just over 200 billion dollars in the first hours of the fall of this digital currency, despite this, more and more people decide to invest a significant percentage of their wealth in digital assets under the promise that the currency recovers and can be used on a daily basis, since aspects such as Web3 promise to speed up the use of these currencies as current currency.

But despite the various doubts that have arisen about the use of digital currencies and their involvement in everyday life, chain analysis indicates that he has begun register a growth in user confidence, since the cryptocurrency ethereum It has stood out as the cryptocurrency with the greatest institutional dominancesince little more than 40 percent of its total volume of its transactions come from large institutions, rivaling Bitcoin that within this sector broke an approximate 30 percent and Algorand with 29 percent of its operations.

However, the United States legislators pointed out that in said cryptocurrency companies:

“There is a worrying lack of publicly available data to effectively assess diversity among America’s largest digital asset companies and investment firms with significant investments in these companies,” the lawmakers said. “We believe that transparency is a critical first step in achieving racial and gender equity.”

According to a sample letter, representatives of the House of Legislators they requested data and policies of diversity and inclusion to 20 cryptocurrency companies as of January 2021. The consultation appeared to be in response to investigations by the House Financial Services Committee in 2020 and 2021 that concluded that “there is still much work to be done to increase diversity and inclusion” at leading banks and investment firms. Lawmakers asked companies to respond by September 2.

Data from other groups seemed to support the US lawmakers’ conclusions. A 2020 report from digital undivided showed that African American women and Latina entrepreneurs received less than 1 percent of venture capital investments, and Crunch base reported that 0.9 percent of female business founders fintech raised venture capital funds.

Other companies are also integrating labor changes, for example; Disney stated that he is leaving the “Fairy Godmother” for more inclusive and gender-neutral titles for the costume boutiques within its theme parks. That is, employees will no longer be known as “fairy godmothers ” and will receive the name of “ fairy godmother trainees ”.

All of this makes it clear that there is a worrying lack of publicly available data to effectively assess diversity among America’s largest digital asset companies.