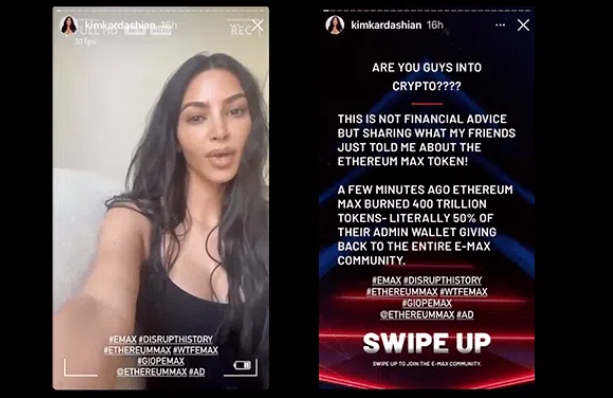 The SEC accused Kim Kardashian of promoting cryptocurrencies on social networks, especially on Instagram, without realizing that it was advertising.

In particular, it is about the cryptoactive called EthereumMaxabout which he did not reveal the payment he received for the promotion.

In January 2022, Kim Kardashian, Floyd Mayweather, and NBA player Paul Pierce were charged in the United States for promote EthereumMax.

It was a collective lawsuit of those affected towards the celebrities and the company or companies (which at that time had not yet been identified) behind the token that was supposed to rise in value in the following days.

The plaintiffs accused Kardashian and Mayweather, among others, of support an orchestrated fraud system for token creators to earn millions from novice investors and with little information. A classic and fraudulent pyramid scheme.

The role of the influencers was key to the scam, because according to the text presented, it would not have been possible without their advertising and promotion.

The lawsuit says that the price of the cryptocurrency increased 630 percent after Kardashian, Mayweather and Pierce promoted it.

Mayweather promoted his fight with Logan Paul, via the EthereumMax URL on his gear. Pierce, meanwhile, posted about the token on Twitter.

Meanwhile, Kardashian posted about EthereumMax on her Instagram stories: she told her followers that she found out about the token “from friends” and copied a link to the project website.

A Morning Consult survey says that two out of 10 people who confessed to seeing Kardashian’s Instagram post, invested in EthereumMax in the following days.

The lawsuit says that within 24 hours of Kim Kardashian’s story, the value of the token tanked by nearly 99 percent.

It also ensures that the creators of the coin sold their positions before the price drop, as shown by the activity of their wallets.

Digital payments, the key to the future of video games

Shark Tank Shark: “Buying land in the metaverse is the dumbest thing”