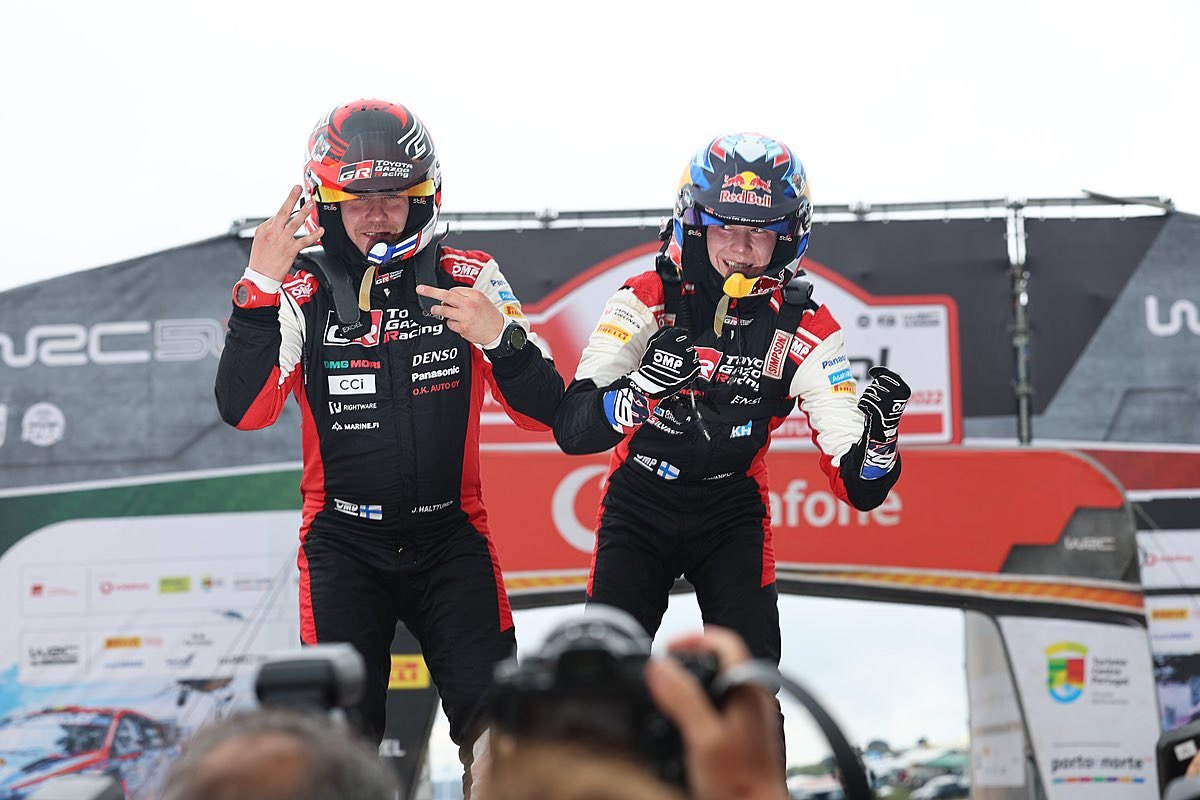 There is no one to stop it! Kalle Rovanperä has put the direct towards the WRC title and although everything can happen in the remainder of the season, nobody can take away the Finn the three consecutive wins he has achieved in the first four rounds of the season. He won on the snow in Sweden and on the asphalt in Croatia. Now, Kalle has closed the perfect hat trick with his fourth win in the World Cup, third in a row this season. With a perfect pilot, Rovanperä has prevailed in the Rally of Portugal over Elfyn Evans and Dani Sordo.

After assaulting the leadership on Saturday afternoon under the rain of ‘Amarante’, Rovanperä has known how to drive with the current. With his scratch in SS17 he already made it clear that he was not going to give Elfyn Evans any kind of option. Once this point was clarified, the Toyota drivers began to manage tires, giving way to other protagonists. In fact, Ott Tänak took the fastest time in SS18 to overtake Pierre-Louis Loubet and reach seventh place. With everything, the most interesting fight was that of Takamoto Katsuta and Dani Sordo for third place.

Dani Sordo knew how to scratch like an ant in the first sections of the day. The Spaniard took the first bite in SS17 and reduced the gap with Takamoto Katsuta in the following two specials. The Japanese managed to stop the bleeding in SS20, although both of them knew that the third step of the podium was going to be said in the Power Stage. Before the start of this section, Ott Tänak managed to gain a new position, as did Pierre-Louis Loubet, thanks to Craig Breen’s brake problems that made him lose more than a minute.

Proving once again his ambition, Kalle Rovanperä achieved the scratch in SS21 to get the five extra points of the Power Stage. Beat the Finn to dani deaf by 2.1 seconds, although the Spaniard obtained his particular award for overtake Takamoto Katsuta and get a podium finish in his first rally with the Hyundai i20 N Rally1. Ott Tänak, Thierry Neuville and Elfyn Evans shared the remaining points by occupying third, fourth and fifth positions at the end of the trap, all of them ahead of Takamoto Katsuta.

Kalle Rovanperä celebrated his third consecutive victory -fourth in the World Cup- after beating Elfyn Evans by 15.2 seconds. A double for Toyota that could well have been a triple, but Dani Sordo avoided by beating Takamoto Katsuta by 2.1 seconds. The Spaniard fulfilled his work with flying colors by getting on the podium in his first rally of the season, scoring very important points for the team. In the end, Thierry Neuville and Ott Tänak finished fifth and sixth, with Pierre-Louis Loubet being the best M-Sport driver finishing ahead of Craig Breen and Adrien Fourmaux.

Yohan Rossel finished tenth, unexpected winner of the WRC2 category. Teemu Suninen had it all in his hands, but the Finn had a run on the Power Stage when he had almost a minute ahead of the Frenchman. Blunder that allows Rossel to position himself as the new leader of the silver class. For their part, Kajetan Kajetanowciz and Chris Ingram completed the podium. By last, Sami Pajari has achieved a brilliant victory in the WRC3 Junior in a placid final day for the young Finnish driver.

How to withdraw your money from Uphold, now that it is leaving Venezuela

Ubisoft would give news of Skull & Bones in early July