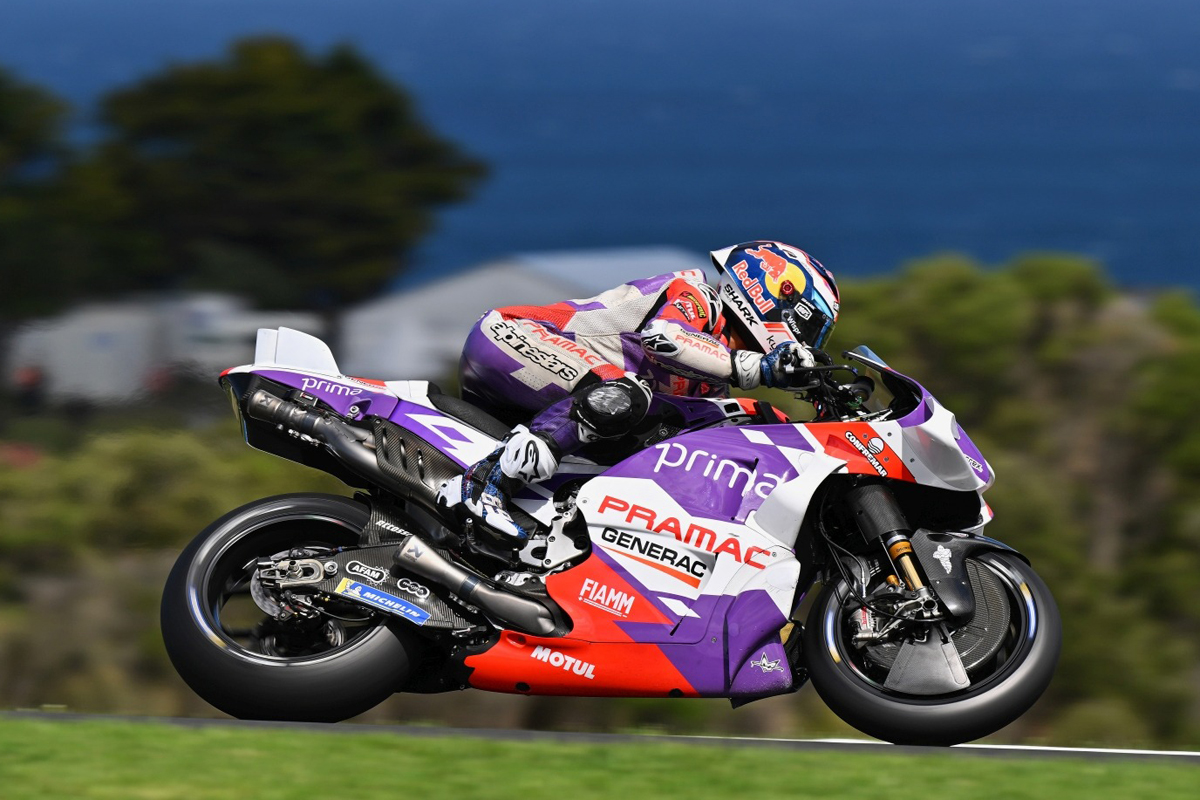 Jorge Martín from Madrid has achieved his third pole position of the season after setting the record for the Phillip Island track. The Pramac Racing driver narrowly edged out Marc Márquez. The World Cup leaders will go out together.

Jorge Martín will start on pole at the MotoGP Australian GP after prevailing in a Q2 in which slipstreams have been the order of the day. In fact, the man from Madrid has used the reference of his teammate Johann Zarco to sign the final 1: 27.767, a record record that is worth Martin to achieve his third pole of the season. Marc Márquez and Pecco Bagnaia will start in the front row together with the man from Madrid.

After a fall-free Friday, FP3 continued this streak and allowed the pilots to play their cards to get a direct ticket to Q2. All the members of the MotoGP grid achieved it, although the best was Marc Marquez. The negative side of the coin was for Johann Zarco, the fastest driver on Friday and who was left out of the ‘top 10’ by a narrow margin. The Frenchman was forced to go through Q1.

A Q1 in which Johann Zarco did not give his rivals an option and with a time of 1:28.113 he won the first of the two extra tickets for Q2. The other was for Álex Rins after winning the game by surprise against Pol Espargaró and Joan Mir. Enea Bastianini was fifth and will start 15th on the grid, all after seeing how the race direction eliminated his best lap, in which he had in turn been hampered by Miguel Oliveira.

Dancing from afar is not dancing, as Sergio Dalma used to say. And Q2 was played in a perfect slipstream dance in which Marc Márquez took Pecco Bagnaia’s wheel in every lap attempt, even if on his first attempt he came close to crashing. Jorge Martín chose to follow Johann Zarco, although more to have a reference than to enjoy the slipstream itself. With the usual explosiveness of him and his partner ahead, Martín did not fail and took pole with a time of 1:27.767.

Index hide
1 The leaders in 20 thousandths
1.1 Miller and Bastianini fail

The leaders in 20 thousandths

While Jorge Martín took pole with track record included, Marc Márquez got the perfect slipstream of Pecco Bagnaia to storm second place. In fact, andl #93 stayed 13 thousandths from Martín after beating his ‘hare’ by almost two tenths. Bagnaia will start third, as the best ranked among the contenders for the title. However, his two great rivals are just behind, on the second row of the grid.

Aleix Espargaró will start fourth after completing Q2 using the wheel of his teammate Maverick Viñales. For his part, Fabio Quartararo will start fifth, in a scenario in which the three contenders for the title have finished separated by 20 thousandths. Johann Zarco, protagonist during different phases of the weekend, will be Aleix and Fabio’s partner on the second starting line.

Despite being the two drivers who go the furthest in the general standings and who need to hit the table at Phillip Island to hurry up their title chances, local hero Jack Miller and Enea Bastianini have not signed a good Saturday. The Australian Miller will start eighth, on the third row of the grid, after a discreet Q2 in which he has been ‘sandwiched’ between the VR46 drivers.

For its part, Enea Bastianini will have an even bigger challengesince the Gresini driver was unable to get through Q1 and also finished fifth in the first qualifying session of the Australian GP. A result that implies that Bastianini will start 15th on the grid and he will have the inescapable mission of signing a great comeback in the first laps of the race if he wants to fight effectively in the leading group.

Chief Impact Officer, the position of the future in companies?