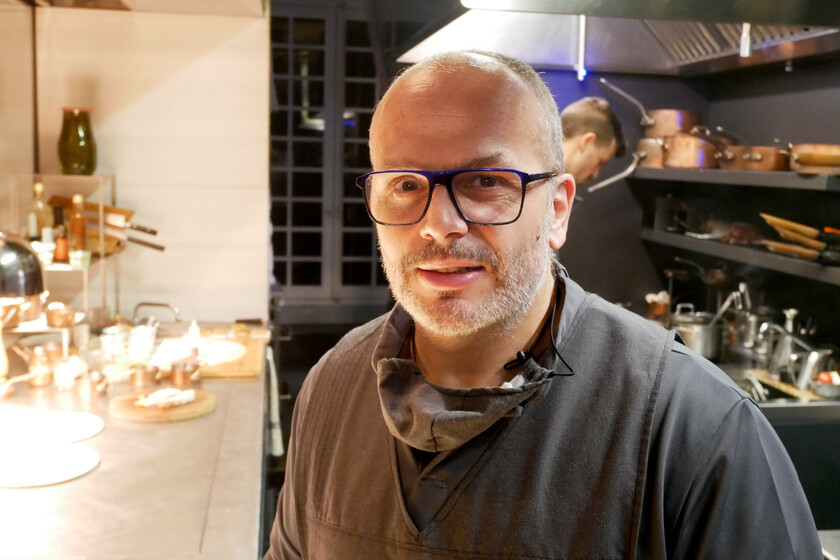 Alchemy, from the cook Jordi Vila, is one of the most renowned Michelin star restaurants in Barcelona. Perpetual candidate for the second macaroon, in a high price range, its tables receive many visits from foreign customers. An audience that is not always easy to fill.

For this reason, Vilà decided, after moving the restaurant to its new location, on the first floor of the building of the moritz factory, open, along with its most gastronomic proposal, a restaurant for day to day. Al Kostat was born like this: a traditional eating housebut in which to dump all the knowledge and professionalism of Alchemy.

“I wanted to look for a restaurant that was profitable on its own, because it is not easy for gastronomic restaurants to be profitable,” Vilà explains to DAP. “Here there are many people with purchasing power, but when they go to eat on a daily basis, no matter how much purchasing power they have, they want simpler things to eat. So we were looking for something like that. If Alkimia is a maximum project, why do it for 40? We can do it for 15 and Al Kostat guarantees us a constant client pass, because the ticket is not so high and it is easier to overcome”.

Index hide
1 A house of meals, with luxury service
2 A menu restaurant

A house of meals, with luxury service

When we say that Al Kostat is next to Alkimia we do not mean that they are adjoining premises: they are under the same dining room. The only separation of the restaurants is aesthetic: the furniture, the crockery and the floor are of different styles, but both share the space and the service -including a kilometric wine list–. And what is more important, they use the same resources.

“The advantage of Al Kostat is that it is nourished by all the hard path of Alchemy in terms of the reflection of a product, of a dish,” says the chef. “What you eat in Alkimia you cannot eat in Al Kostat, but there are synergies. If I have a product in one place, I also have it in another and it gives me rotation: it makes logistics easier. Then in Al Kostat if you eat a rice it is made with Alkimia fumet, the funds are shared”.

The green beans with perol sausage (13 euros), are one of the stars of a menu full of traditional Catalan preparations.

In Al Kostat’s menu, in which dishes constantly come in and out, we find very simple preparationsalmost impossible to find in restaurants that are not menu of the day, but cooked with the best product and at the highest level.

The flagship dish of the restaurant –which does not usually leave the menu– is the green beans with butifarra de perol, a sublime dish in its simplicity. They are green beans, but you have never tasted green beans like these. “Now we have grilled sardines with tomato bread”Vila explains. It is a dish of 10, but it is very difficult to find. If I can buy sardines and I have charcoal, why not?

Read:  This terrifying Steam video game will give you your money back if you are able to get out of its maze alive within a time limit

In Al Kostat there are very well-crafted traditional stews, with great depths, such as this squid stuffed with pork and trumpets of death. Very good.

“The most important thing about Al Kostat is that if the gastronomic proposal goes through what the chef says what is eaten and how it is eaten, in Al Kostat it is the client who says how much is eaten and how”, explains the chef. “It is the restaurant of the absolute freedom for the customer”.

Your chart’s greatest hits can be tested for a average ticket around 60 euros, but you can eat for less if, for example, you only have a main course and a dessert; and for much more if you want to eat truffles, eels or grilled fishwhich is also offered.

During our visit, in the midst of asparagus season, there were several dishes with this delicacy, such as these gizzards.

There are many great chefs –the majority– who have opened a second banner in which to offer cheaper cuisine that helps balance the difficult accounts of a gastronomic project. A model that, explains Vilà, was born with the Inopia of Albert Adria. But there are few B-houses where you can eat as well as at Al Kostat, which is the only one, to our knowledge, that also has the lead chef running the show –although the production lines are separate–.

Vilà is as comfortable or more comfortable cooking green beans than assembling the complex dishes offered at Alkimia, but he is clear that, at a certain point, he will prefer to dedicate himself only to the simplest cuisine: “At Alkimia I have a few years left, but my project of travel happens to continue with an Al Kostat. With a saucepan, a knife and food in front of me I am happy. I’ve had my ego covered for years. The gastronomic part of a project, as I have always raised it, is critical and is transmitted with the youth. The Rolling are very good, but don’t futem. I personally believe that I am in my best moment of maturity, with the kitchen more established, I feed better than ever, but it is also true that the end is nearer and we must make way for young people who want to tell us different things about food, how to eat, how to stress ourselves in front of a dish. What I want now is to relax and relax in front of a plate”.

In DAP | Where to buy the best cannelloni in Barcelona to take away in San Esteban
In DAP | Air shuttle hospitality: can you conquer Madrid and Barcelona with the same restaurant?

A futuristic vision of cryptocurrencies