Jeep driver wanted to show off in flood; falls into sinking 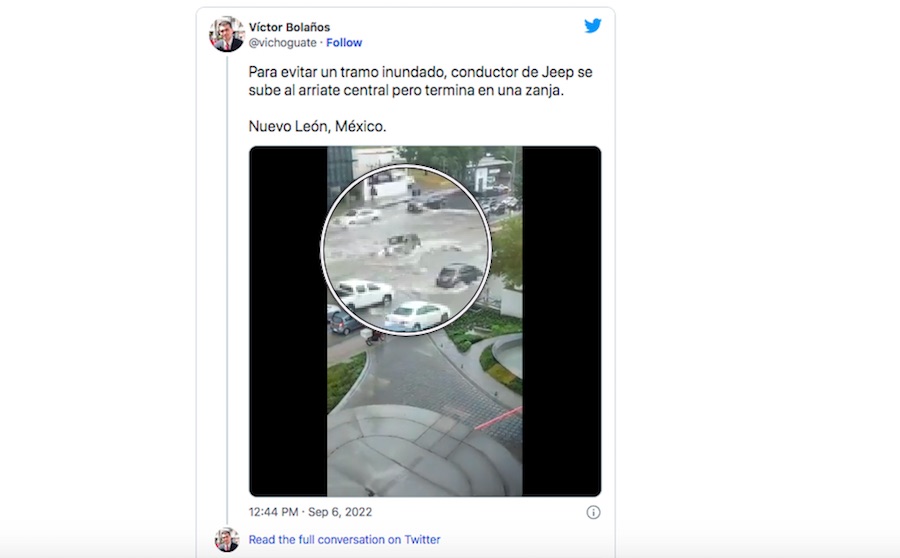 The story of a truck Jeep being driven in the middle of a flood ended badly, when the precipitation of the water caused a sinking on the median where the vehicle tried to circulate and the audacity of the 4×4 power ended badly.

This bad anecdote is one of the many challenges motor unit owners face, especially when we see projections like those released in the study “Connected Car in Europe”where I know revealed that a 31 percent of those interviewed see the fact that safety must be guaranteed in this type of unit as a great challenge.

Vehicle safety is a matter of concern in the industry, considering that in the last revision what was done about it in Statistical yearbook of accidents on federal highways 2019the largest number of these accidents occurred in light vehicles, with 1,912 fatal cases; while motorcycle accidents added 246 fatal events.

These bad references are a key argument why when the consumer buys a vehicle, according to the “Global Consumer Survey 2022”where safety was the priority for 56 percent of those interviewed, recognizing that it was the main factor they considered when buying a car.

Safety is key in the automotive market and is a key factor to understand in the market in the event that these determine activities that must be innovative at a time when greater empathy with the consumer is sought.

From viral to security

The video shown of the driver of a Jeepwho seeks to get ahead of a flood, finishing his feat badly, shows the challenge of safety, even in situations such as driving on city roads in the middle of the rain.

Read:  CSOs and what it means to survive from adversity

Information from the local press in Monterrey reports that the vehicle sought to avoid flooding on Avenida Vasconcelos, Therefore, it was mounted on the road median, however, because they were planters, the earth was removed in one part of them, causing an imperceptible sinking due to the water, which is right where the truck fell, whose 4×4 traction could not with the urban challenge.

To avoid a flooded section, a Jeep driver climbs into the central flowerbed but ends up in a ditch.

The risk to which the driver was exposed shows how important it is at this time to have protocols that help react to these eventualities. It is worth remembering cases like those that happened in Mexico City with Teslawhen an acquaintance apps of private transport that began to offer services in these vehicles became a trend in networks, since the vehicle when it was stranded in the middle of the flood of a low bridge in Mexico Citydoors and windows were deactivated, so it was not possible to manually exit the vehicle.

The situation occurred in September 2021 and in that incident, Beat He gave his position, warning of regretting the incident, since the mechanical failure was unexpected, but confirmed that the safety of passengers and drivers was essential for them and a non-negotiable standard in their operation.

“As Beat Tesla is a unique mobility model, we have total control of what happens on our trips since we own the fleet and our drivers are part of our active workforce. In this way, we can offer coverage solutions for medical expenses and other types of compensation that go hand in hand with the premium service that characterizes us”, argued the platform on that occasion.

Safety is essential in the use of vehicles. There are studies that reveal how important this aspect is for the consumer in these units and with the cases of a Jeep that could not overcome with its engineering a collapse caused by the rains or a car Tesla that could not be opened when it was flooded by the flooding of a road where it was traveling, it seems that there are still many outstanding safety issues for automotive brands and the consumer will undoubtedly be determined to adopt them or join the brands that know how to respond to this need.