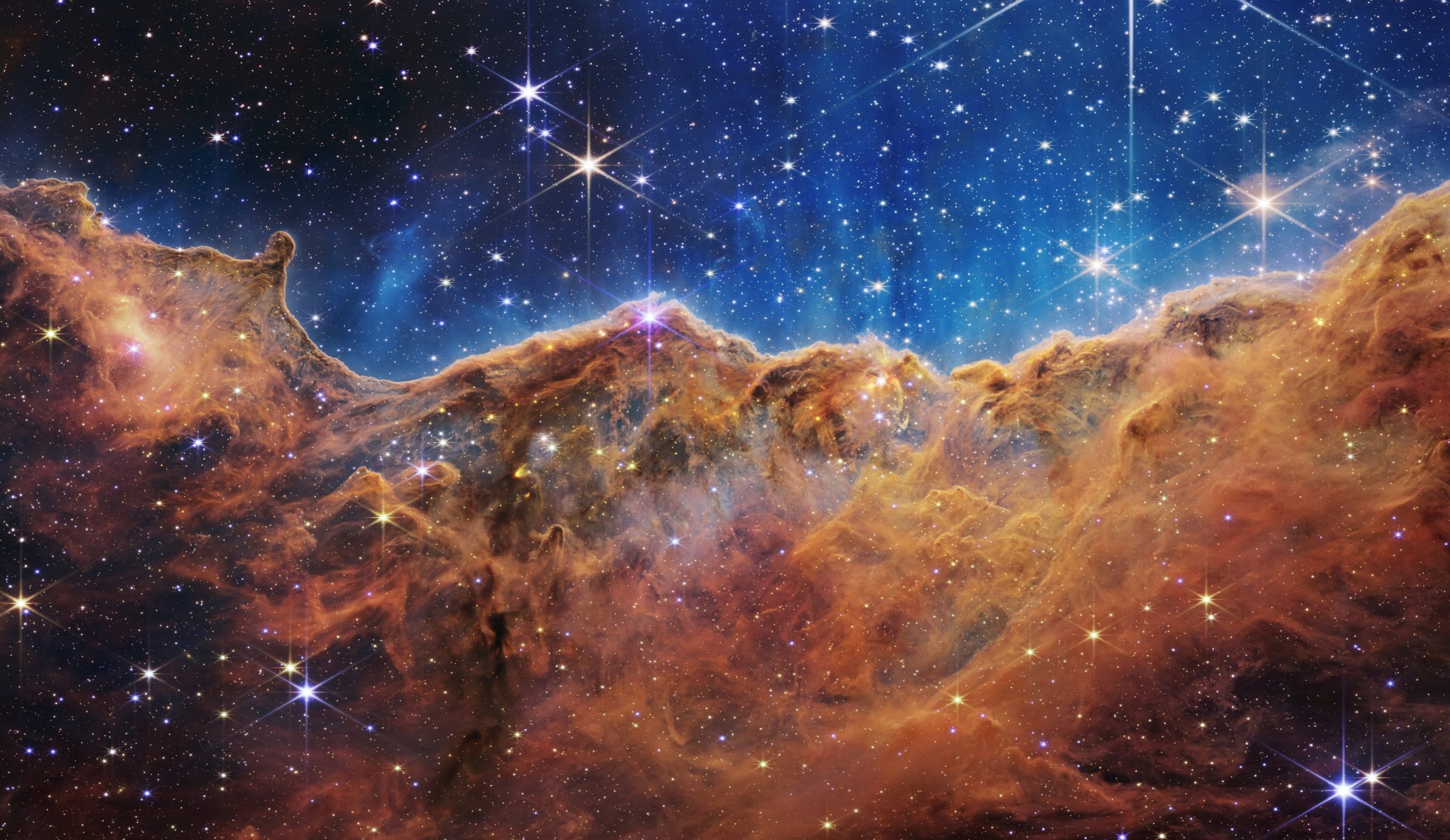 The first scientific images from the James Webb Space Telescope have left us all speechless due to their high resolution. With them we have been able to travel to faraway places in the universe, located billions of light years away. We have seen the light of objects that were formed in remote times and close to the big bang, the explosion that started it all. But does this mean that we have already hit rock bottom? Can’t there be instruments capable of going further than the James Webb? The truth is that there can be. In fact, they existed long before he left for his destiny.

These are the instruments that study something known as microwave background radiation. This generally encompasses millimeter wave and microwave radio telescopes, located both in space and here on Earth. In the words of David Galadidoctor in astrophysicism and resident astronomer at the Calar Alto Observatory, “we already have telescopes that reach the bottom of the pool, what happens is that there is a gap between the background radiation and the extent to which telescopes like the James Webb , and this helps us narrow that gap”.

But what is this background radiation? And what does distance have to do with the age of objects? To answer these questions you have to make a great trip back in time. As great as the age of the universe itself.

Index hide
1 Basic concepts: distance and retrospective time
2 How far can the James Webb measure?
3 What makes it different from other telescopes?
4 Actually we can go further than the James Webb

When we talk about distances in space, the terms Light years as a unit. These refer to the distance that light travels in a number of years. For example, if we say that an object is 20 light years away, it means that it is the distance that light would travel in 20 years. Taking into account that the speed of light is approximately 300,000,000 m/s and therefore travels 300,000,000 meters in a single second, the exact distance in meters can be calculated. Although it would be a huge amount, that’s why other units are used.

There is another important concept, which is retrospective time or, what is the same, the time that light spends traveling until it reaches where we are. For short distances, both concepts are equivalent. But, as we increase these values, they stop matching each other due to the expansion of the universe. David Galadí explains this to us with an example.

“The Moon is 1.3 light-seconds away and, furthermore, the light that reaches us from it left there 1.3 seconds ago. But for more distant objects it begins to count the expansion of the universe. Imagine a distant object from which we now receive the light that it emitted 2 billion years ago. That is its retrospective time, we see it as it was 2,000 million years ago. However, during those 2,000 million years that light has been traveling, the space between that object and our Galaxy has grown due to the expansion of the universe. Therefore, the distance to that object today is plus of 2,000 million light years.

How far can the James Webb measure?

The James Webb is capable of reaching objects located at great distances, close to 13.8 billion light years. This is a key value, since it is calculated that the Big Bang, the great explosion that marked the initial point of the universe, occurred a few 13.8 billion years. Could we then be witnessing the birth of the universe?

Not so quickly, let’s recall the concepts of distance and retrospective time. “With this of James Webb they are telling us that we see things as they were 13,800 million years ago, practically the origin of the universe, as they say”, says Galadí. “But that’s his hindsight. During that time that the photons have been traveling, space has grown and objects with retrospective time 13.8 billion years are now at distances vastly greater than 13.8 billion light-years.”

Therefore, there is still uncharted territory. There would be room to observe beyond where it seems that the james webb. But what could we find?

At the moment we know that, also taking these concepts into account, if we look further afield we continue to travel back in time. Therefore, there would come a time when some of the celestial objects that we know would no longer be there, simply because they wouldn’t exist yet. “If the telescope is powerful enough, then we can see galaxies further and further away, and therefore in most primitive states of its evolution or formation”, relates the astronomer consulted by this means. “Further on we will see embryonic galaxies and there will come a time when, somewhat further on, we will no longer see galaxies for the simple reason that they had not yet formed.”

Though that doesn’t necessarily mean you couldn’t see anything at all. “We’ll see if any collapsing gas clouds, protogalaxies or whatever there is, but if you look far enough, there will come a time when there will be nothing to see”, he explains. “And it is not a question of a larger or smaller telescope, it is that if no stars or galaxies have formed yet, then they cannot be seen, period. As simple and as complex as that.”

What makes it different from other telescopes?

Part of the great potential of the James Webb lies in its ability to operate in the infrared range of the electromagnetic spectrum. This is very interesting, since the obscuration generated by clouds of gas and dust can be better penetrated. But that is not the main factor that differentiates it from Hubble. In fact, while this telescope operates primarily in the visible range, it can also operate in the near infrared.

Therefore, another of Superpowers of the James Webb is related to your mirrors. Its primary mirror, with 6 meters in diameteris much larger than Hubble’s, which he was only 2.4 meters. This gives it a much higher sensitivity and resolution, you just have to see the comparisons of the photographs of one and the other.

Thanks to these and other factors, it has been able to take out what are considered the deepest and sharpest infrared images Until now. But that does not mean that they are the most profound images. And it is that for decades there have been telescopes capable of going far beyond the reach of James Webb.

If we continue traveling in time we will find the exact point to which those telescopes arrive. We have already seen that there comes a time when there would not even be galaxies. Perhaps some collapsing gas clouds would be seen. But the James Webb could not enter them, since not ready for it. In addition, according to what David Galadí tells us, “this gas is essentially transparent”.

Actually we can go further than the James Webb

But we can still travel backwards, past the gas clouds. The universe, increasingly primitive, is becoming more “dense and hot”. We are approaching the big bang. “There comes a time when, if I look further, the gas (almost just hydrogen with some helium) is so thick and hot that begins to be ionized. And here comes almost the high point of our story. turns out ionized gas is opaque. Therefore, it becomes a curtain that covers everything and does not allow us to see beyond. In the words of Galadí, it is “like trying see far away a haze day”. “No matter what telescope you use, you can’t see beyond it.”

We have therefore arrived at the aforementioned pool bottom. A bottom that the James Webb cannot see. But that does not mean that there is no instrument capable of detecting it. The key lies in a second property of the ionized gas. And it is that, in addition to being opaque, shines more or less like sunlight.

“The light that comes from there has been redshifted on its way through space, due to the expansion of the universe, so that the cosmic background of light from ionized hydrogen is no longer seen in visible light,” explains Dr. in astrophysics. “It is so redshifted that it is now observed in the microwave region.” Therefore, we would be facing the famous microwave background. A region of the universe that has been mapped thanks to instruments such as the Planck Satellite, that the European Space Agency (ESA) sent into space in 2009!

But, although this is the most powerful of the satellites dedicated to this purpose, others were launched before it, such as NASA’s WMAP, which added to the data taken by a multitude of telescopes and apparatus, on earth and in space. We have spent decades obtaining information from that haze curtain that the James Webb cannot reach. Therefore, it is true that we have much deeper pictures of the universe than any that this new telescope can give us. Does that mean that what we saw yesterday is not surprising? Not much less. The James Webb deserves to be the mass leader he has become. The problem is that his success has led us to forget about other legendary rock stars. Stars who also continue to work like the first day. Let’s not forget about them.