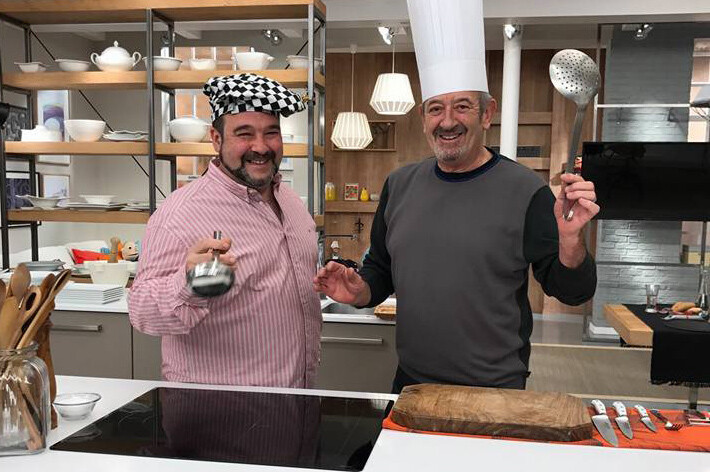 Few characters are more popular in our country than the tireless Karlos Arguiñano, who has made his name, his cuisine and his peculiar style an art and a large business. It would not be strange to find savvy people who tried to take advantage of his name for their own benefit, but this is not the case with Carlos Arguiñano restaurantalthough it may seem otherwise.

The establishment, located in Calamocha, in the northwest of the province of Teruel, proudly and unashamedly displays the name and surname of the Basque television chef who greets the customer right from the door. The small nuance is in the initial letter, a ce instead of the ka characteristic of Basque. Spanish picaresque, sympathetic wink or coincidence? Although it sounds a bit like a joke, the truth is that this Arguiñano is family of our endearing cook and presenter.

The images that the Teruel restaurant itself shares on its networks, with the two namesake chefs posing together smiling and with camaraderie, they show that the one from Beasain is not only not bothered by the existence of this other place, but also that they are united by a relationship of friendship and appreciation.

Arguiñano himself, with ka, shared a few years ago in one of his television programs the existence of the Calamocha restaurant, encouraging viewers who pass through the area to pay him a visit. “This is Carlos Arguiñano, who has a restaurant called Carlos Arguiñano, with ce”, he clarified, pointing to a photograph of the two Arguiñanos together.

Son of a cousin of Karlos, this second Arguiñano therefore does not wear the surname by chance, and therefore the culinary vocation runs in the family. “He learned at my house 35 years ago, when he was a kid.” The chef and presenter also recommends trying his cuisine and then remembered some magnificent tripe that his namesake served him almost for breakfast during his visit.

Read:  Hitman 3: Agent 47 returns to Berlin with a special Easter event and it's free

It would not be the only time that Calamocha would appear on the show of his uncle, because in addition to sending him on one occasion “the longest snake in Spain” (fresh sausage), the two cooks would later share stoves in front of the screens.

Low-temperature suckling pig with apple compote and curry caviar, one of the dishes at the Carlos Arguiñano restaurant.

The Carlos Arguiñano bar-restaurant renovated its space a few years ago in Calamocha itself and is still active after the forced stoppage due to the pandemic, with a service that starts first thing in the morning and offers varied dishes to restrained pricestapas, menu of the day and options to take away.

We assume that no unsuspecting person will go to the place thinking that it is the well-known Karlos Arguiñano hotel restaurant, located in Zarautz, although some comments received on their networks show that there are clueless people everywhere.

The kitchen of your life: 950 easy, fast and healthy recipes (Planeta Cocina)

Images | Carlos Arguiñano Restaurant
In DAP | Karlos Arguiñano’s 6-3-1 rule to make the perfect potato omelette
In DAP | Joseba Arguiñano, about his grandparent, Karlos: “Sometimes he tells the same joke three or four times and you don’t laugh so much anymore”