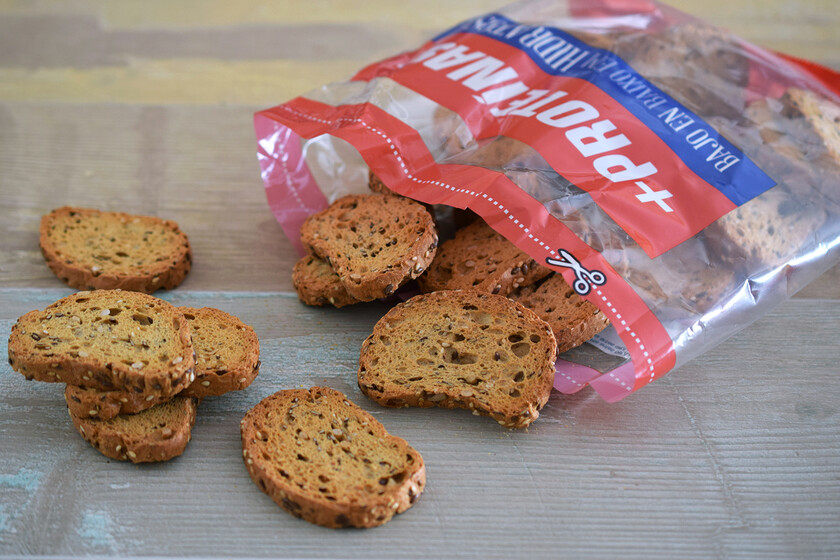 After the initial commotion with the launch of the new Mercadona protein bread, curiosity has led us to buy it and try it at home. Though we distrust input of any product that is advertised with near miraculous nutritional claims, we cannot judge -or criticize- the same until we have done a good tasting.

The protein obsession seems to be still far from over. Although we know that it is an essential macronutrient, and with greater importance for many sports practices and certain stages of life, if they are in fashion it is because they are associated with losing weight. The low carb diets like ketogenic or keto, paleo and everything that bears the last name lowcarb either fitness it gets all the attention on social networks and also in product marketing.

In principle there is nothing wrong if these eating patterns are followed under the supervision of a nutritionist and adapting to the individual needs of each person with certain objectives, the problem arises when we associate “more protein” with “less fattening” or, even worse, “lose weight”. As always with these products, it is essential to carefully read the labeling, both for ingredients and its nutritional composition.

And, no less important, you have to check if it’s good.

Index hide
1 The purchase and a first look
2 It’s time for the tasting: is it good?
3 In conclusion: is it worth it?

The purchase and a first look

It is not difficult to find the baptized as ‘Toasted Bread + Proteins’ of Farmermanufactured by the Valencian firm Anitín Special Breads. It is one of the latest stars in its catalog and is usually well exposed and with a large number of stock. We can find it in the bakery section among its many other varieties of packaged breads, sliced ​​breads, toasted breads, scolds, pickles, and more.

The first thing that catches your eye is priceAlthough we cannot say that we are surprised. Yes ok 2.45 euro It doesn’t seem like a big outlay, it’s noticeably superior to other toasted breads in the same range, considering that the bag only contains 200 g. The 550 g of toasted bread with cereals and seeds cost 2.35 euros, and the normal classic barely costs 1.75. Is it worth the difference?

Its price is significantly higher than any other toasted, sliced ​​or molded bread

The protein bread package is rather more chaotic than those mentioned, with all the slices neatly arranged in compact rows; here the pieces dance at their free will in a bag that, at least, is made of somewhat thick and resistant plastic. But you will have to be careful when choosing because many units have been crushed and we can find croutons instead of slices.

The bag itself doesn’t offer much more mystery; you have to open it roughly like a bag of chips or, more recommendable, with scissors. It does not have a self-closing of any kind, so we better move the bread to a tupperware or hermetic box, or pull the classic clamp. once open it can go rancid quickly, and it is not something that is going to help improve the flavor of this pseudo-bread, precisely. And they recommend consuming it in five days.

It’s time for the tasting: is it good?

When you open the bag you are already invaded by a aroma, shall we say, strange. It should not surprise us if we keep in mind that it is not real bread, but the brain is treacherous and expects to receive the traditional smell of a familiar toasted bread. First disappointment.

The taste too will crash who approaches this type of products for the first time. In our particular case, there is no surprise, because at home we usually prepare our own breads and similar doughs, with recipes such as gluten-free sliced ​​bread, stone age paleo bread or keto rolls.

Read:  Macaroni and non-cheese, the vegan and very nutritious alternative that will surprise the guests

It has a certain acid aftertaste, but the most perceptible is that sensation of chewing a mixture of birdseed -for the seeds– and cardboard that puts back so much the palates more accustomed to the traditional bakery. As a person totally devoted to seeds and nuts – these crackers are my favorite homemade snack – this is a plus, but it will scare off many other consumers.

It is very crunchy and apparently light, which could lead us to eat more

In your favor it has to be extremely crunchy without being very hard to bite, although once chewed it acquires a somewhat granular texture that, again, differs from ordinary bread. And that gluten is left over. It is also worth remembering that very crunchy food has high palatility and we can eat more without realizing it.

After the first dry stick impressions, we tried it with different toppings and accompaniments, and thus things get better notably. It goes well with both the sweet touches of fruit, yogurt or a fresh and creamy cheese, as well as the salty ones of more cured cheeses, peanut butter, avocado, smoked salmon, cooked turkey breast, etc. And chopped as a garnish for soups and vegetable creams, it’s not bad either.

In conclusion: is it worth it?

If you try it and like it for what it is, buy it if it’s worth the price. Now, if you are going to make the economic and taste effort just for its alleged nutritional benefits, there are best ways to eat proteinand of much better quality.

It is true that it is about bread more nutritious than its first normal ones, and it complies with the legislation regarding advertising its protein content and low amount of hydrates. But always in comparison, precisely, with ordinary breads. That, let’s not forget, it is not necessary to demonize if they are of quality.

It’s not going to help you lose weight by itself because you still have many calories, more than other toasted and crisp breads and more than sliced ​​bread or a loaf. This is because it has a lot of fats, although most are monounsaturated and polyunsaturated. It is also rich in fiber, but here it loses out to other cheaper options, such as ‘Fiber and sesame bread’ – Hacendado’s version of Wasa-.

Yes, it is very rich in protein compared to other breads, but you have to do the math. For the amount of protein to be relevant, we would have to eat almost the whole package, ingesting many calories at once, which, in addition, probably do not feel very good to the stomach in excess. And let’s not forget that they are not high-quality proteins, since most of them come from cereals and gluten.

As highlighted by our colleagues vitonicMercadona’s protein bread can be a good option for a quick breakfast, a snack satiating between meals or to recover after playing sports. But I would only recommend it If you really like its taste, then to take quality proteins and fats we always have best foods such as natural yogurt, olive oil, avocado, nuts, fresh cheese, seafood preserves, eggs, tofu or lean meats.

And, let’s remember once again, carbohydrates are not the devil.

In DAP | These are the Mercadona cookies that I try not to buy because we devour them in one sitting
In DAP | We tried Mercadona’s cauliflower crumbs, Hacendado’s ‘cauliflower’: you’ll like them even if you hate this vegetable