“It is the Gargouillou of the onion” 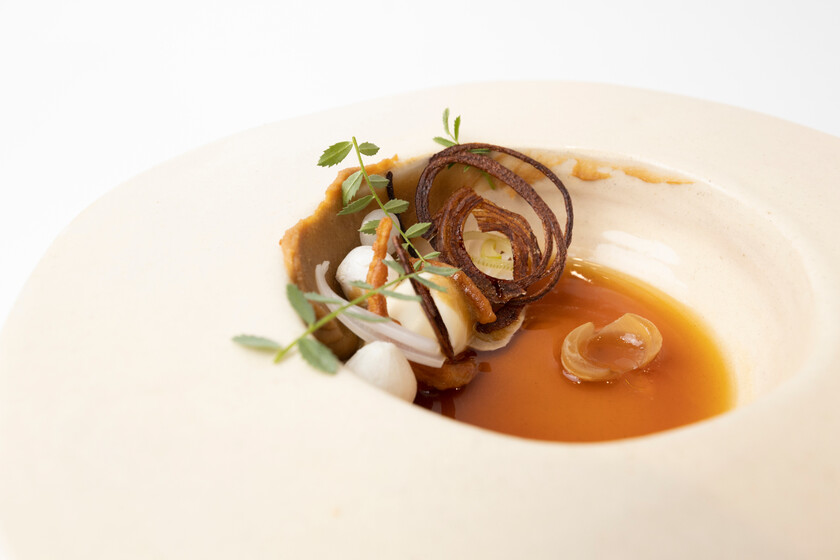 The Cook Diana Diaz is known for being the right hand of Rodrigo de la Calle in The GreenHouse.

The Madrid restaurant is not a michelin star anyone: it is the absolute reference in terms of vegetable cooking in our country. Díaz is not just another head chef either: she has been, for a long time, a creative mind that contributes some of the most interesting dishes in the restaurant.

This is the case, for example, of the interpretation that El Invernadero has made of the classic onion soup. A dish that acts as extreme tribute one of the most important vegetables in the kitchen.

“Our onion soup is made from grilled onion and it also has chickpeas in the broth”, explains Díaz. This soup is accompanied by a cheese quenelle at the base, an onion cream on the edge and a lot of vegetable textures: crunchy, with dehydrated, freeze-dried, pickled and grilled soybeans.

“We present it and even Mario Sandoval I wanted to repeat ”, jokes De la Calle. “I call it the Gargouillou of the onion.”

Diana Díaz and Rodrigo de la Calle after their talk at Madrid Fusión.

On the stage of Madrid Fusión, De la Calle has acted almost like Díaz’s boy, for whom he has not spared praise: “I had never had someone by my side who understood me, who knew the path we were taking, opening, in against everything. It is wonderful to be able to work with her. We have achieved a symbiosis. She is more than a chef. She is the manager of the restaurant. He does everything: he runs the room, the kitchen, the ferments and he helps me in the creative development of all the dishes. It is very nice to focus on the star of the restaurant, which is Diana”.

Both De la Calle and Díaz have had a similar family relationship with vegetables, in intimate relationship with the times of the field: both come from inland rural environments, where preserving melons, peppers or tomatoes was not an exercise in gastronomy. It was day to day. A day to day that both have led to the dynamics of a restaurant as special as El Invernadero, where many things happen all the time.

Read:  what is it, how is it different from bacon and how to substitute it

Some of Díaz’s dishes arise simply from the need to take advantage of the endless number of vegetables that arrive at the restaurant. Others, as is often the case with great ideas, from what seemed like a mistake. But in the dishes of the head chef at El Invernadero it also seems that there is always a anchor with traditional cuisine, which he learned from his grandmother in the town of Mocejón (Toledo). “My family does not come from a hotel family, my grandmother served and they taught her to cook,” Díaz explains. “When she formed her family, she transmitted that gastronomic culture to her.”

A culture that is manifested in dishes such as the pickled olive oil soup with which Díaz won the XIX International Prize for Cooking with Extra Virgin Olive Oil. A soup that is actually inspired by the simplicity of fried green peppers with eggs. The soup, a marinade made from a blend of sweet pepper and onion, with Picual olive oil and a mild white vinegar, is accompanied by a soy-marinated egg yolk, finely fried green pepper, fried egg white and, as usual in El Invernadero, many herbs and flowers that give the final touch to a dish that, they have explained, can be enjoyed in the restaurant’s summer season.

Someday, surely Diaz He sets up his own restaurant. Something that De la Calle, he assures, will only be able to applaud: “There is nothing more beautiful than someone leaving your restaurant super prepared and flying.”

In DAP | The ‘waste’ Michelin star of Ricard Camarena
In DAP | Dabiz Muñoz’s homecoming: “95% of DiverXO’s cuisine today has to do with Spanish products”