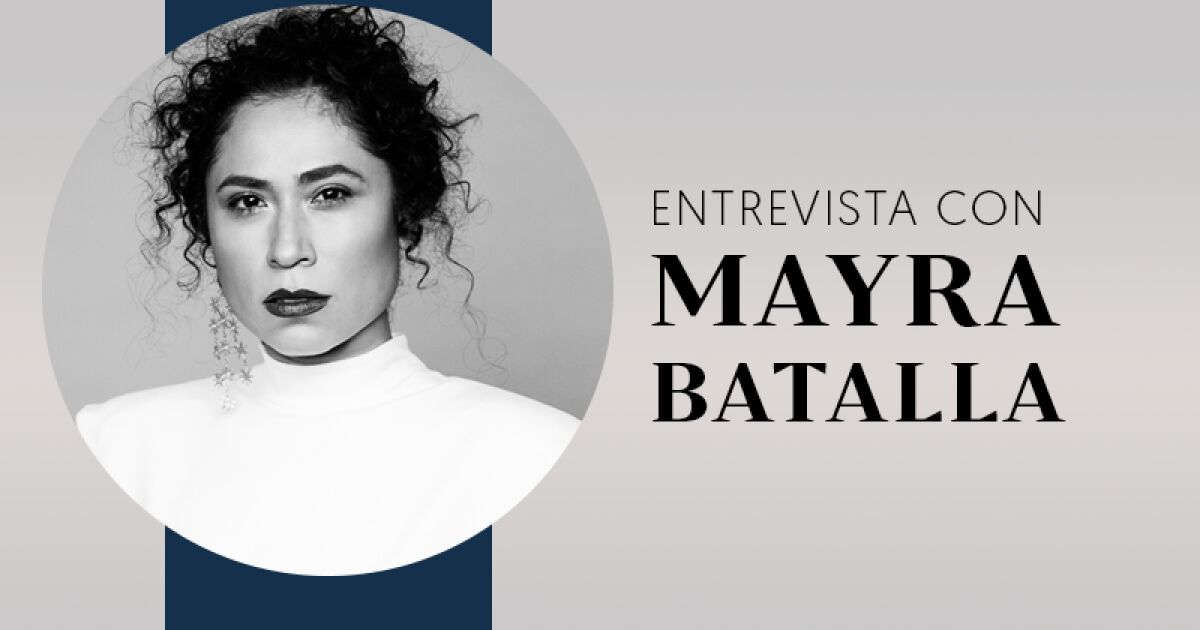 What was it like for you to return to the cinema in these circumstances, after the pandemic?

It was very special to come back with a film that I was involved with and also in Cannes. It was very nice to see the loving way in which she was received.

Did you ever imagine that I was going to have that reception?

To be honest, since we started working, everyone involved knew that we were in something very special, that it had great potential for Tatiana Huezo, for Nicolás Celis, for the story, for the team, the actors … we knew it was a very training powerful and that we could reach a very large place. Maybe not Cannes, because we can’t control that. But that it ultimately turned out to be that was a huge surprise.

What was it that convinced you to enter this project?

The truth did not hesitate to enter. I never knew what the story was about until it was there. When I went to the casting I knew it was for Tatiana Huezo, and obviously I wanted to be there. I didn’t care what the story was, I wanted to work with Tatiana for all the work she has done with Tempestad and for The Smallest Place. At the casting they gave me a couple of scenes, but they didn’t give me a great context. Then there was an interview and I found out little by little. In the last callback I worked with Tatiana and Fatíma Toledo –the natural actors coach– and the girls, and the more I found out, the more I wanted to be there. I didn’t read the script until months after the film was finished. Obviously as we were working I was finding out. I read the novel very recently: I started it a few weeks before I went to Cannes and I finished it in Cannes.

With that peculiar background, how was your construction of the character?

Very particular. It is not that I was unaware of the work proposed by Fátima, who does not believe in the construction of the character as something that you take from someone else. She thinks you are the character in other circumstances. I believe in this very much. Sure you adapt things from outside, but it is your body going through your emotions. I did this type of work in the first year of my degree; they call it indeterminacy. It is throwing away all beliefs, confronting all your fears, your illusions, your childhood and there is no character; the work material is you. That was the job. Obviously, this was modified by working with the girls and by taking what they were giving me to turn it into Rita and Ana’s relationship. It was also a job of getting involved with the townspeople, becoming part of that mountain. It helped a lot because we were so isolated. I missed my family a lot and felt some of the desolation that you see in the movie. They are characters that are waiting all the time. I don’t want to tell much about the film, but there are tremendous scenes in which women climb a hill where there is a signal at a certain time. It is a moment of hope of having contact with the outside that is going to get you out of that – in this case of violence – and it never comes. It was a very interesting process because the actors were also experiencing a little of that, to a much lesser degree. The job was to take the stimuli that were there.

How was it emotionally for you? Not only is it a very difficult context in terms of location, but if you add history to that …

It was very strong. It required being in a state of great hopelessness, of loneliness. Although I do not know if I am a masochist, but acting is very rich to be able to go down to those depths. There is a hint of enjoyment in allowing yourself to experience that. I would not allow myself to be at that level in my house because I live with more people and because life demands things from me, but it is very rich to allow yourself to be sad and desolate and not have to make any effort to pretend not to be. In the world as we know it – as much as there is talk about mental health – it is still frowned upon. Someone who allows himself to be in these states is rare, an outsider. The character suffered a lot but I can tell you that I simply allowed myself to be there. It was an act of generosity with me and with everyone involved. A very particular issue of trust also arose, as it required a trust with Tatiana to open up and then for her to take that material out when necessary in the scenes. We put our sensitivity at your disposal.

Besides playing Rita, you were guiding the girls. As was?

It is very particular to work with people who are making their acting debut, particularly children. It is curious because there is another type of encounter. Mayra, the actress, was very aware of what was required, of where to take the girls, to what emotional states she had to provoke them so that we could tell the story. And the mother, Rita, is also very worried and attentive to Ana all the time. It is a game between character creation but at the same time it is you. It was very interesting because my way of relating to the girls was what was required. But of course, I understand why you ask, because normally as an actor, you go, you worry about your character and that’s it. And here it was not the case.

Read:  Antonella a fundamental piece in the moment that Messi lives

And more because here girls are playing very vulnerable roles, in which you might think that, if they were not acting, they would be too young to get involved in that issue.

Now, Tatitana took months to find the right girls, and the chosen ones were because they had a life experience in which they knew a little about it. One would think that because you are small you should not know about such things. The reality is that you do see it; you least hear it. That is another layer of the film that has more to do with the things we are exposed to from a very young age. Ultimately that’s what the movie talks about. See childhood, innocence that is interrupted by the arrival of trucks with men who come to destroy. I know I’m talking about the extreme, but I think that for everyone, at some point in growth, there is an event that causes innocence to end.

The movie talks a lot about the ability to overcome and that made me reflect on the circumstances that I have faced as a woman without realizing it. Surely you have done it too. I’m going to say something that seems very superficial but is not: think every day what is the right thing to do, how to dress to go out. It is something very normal but it is cannon that you already grow up knowing that if you wear this skirt it will have these consequences and therefore it is your responsibility. That is what the strategies these mothers formulate are: making them pass as boys, denying that they are totally girls, because it is a curse to be discovered.

This is the biggest role you’ve ever played in your career, but beyond that, what did it mean to you to be in Fire night.

First was the opportunity that I was waiting for, that I wanted to see happen to me one day. It was also a great confirmation of what I am capable of, and I say this not only on a professional level, but also on an adaptation level, of finishing something by taking it to its last consequences, –then it is frowned upon to speak because it is considered an ego thing–, to see that I can. And it was a great can of Tatiana, of all women. It was a very complex situation because we were very far away, the weather was tremendous, for many reasons. It became a “how-to-not” thing. When you go up the mountain you get tired, you complain, you cry and you despair, but you get there. It is a great prize for those of us who were there. Regardless of whether the film is successful or not, it definitely left us somewhere else, and personally, also, more towards the social roll, not that I did not know about this situation, but it certainly made me very sensitive and made me feel aware of those who are there, with their lives at risk, and that little is done. I don’t even know what we can do. But beyond looking at them with pity, you think that no one would have to go through that. No one should be afraid of being born a woman or of existing.

This season, the two winning Mexican films at Cannes –La Civil and Night of Fire– they talk about the violence in our country. How did you feel about people’s perception of this situation?

It is very curious because many other films also spoke of each other’s violence, but there is something very particular when talking about Mexico. And we would like to talk about something else, but the reality is that the country is in a tremendous crisis of violence against women. It is a reality that cannot be denied and it is a phrase already well spoken but the cinema reflects reality. It shocks me because the reality is very varied, but without a doubt this is a tremendous wound to which the world is not alien or blind or ignorant. There were people who didn’t even speak to me, who just came up and hugged me or cried. The reaction was very empathetic.

Current diseases that have the world and the WHO on alert