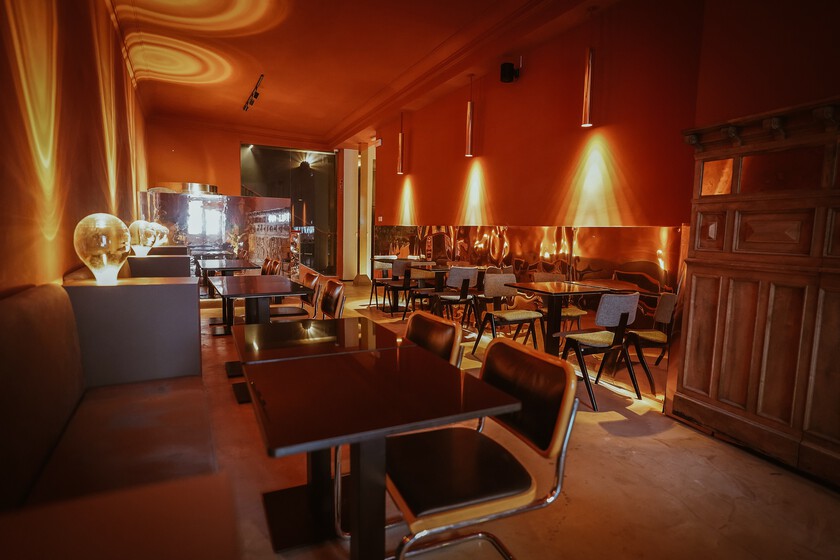 It seems that little by little cities are losing their essence. Centennial shops and cafes are closing, and the great avenues are full of franchises and large chains that homogenize the cities. But sometimes, there are spaces that are lucky, and in the face of disappearance, they re-emerge with even more force.

This is the case of Barbieri Cafe. A historic café that was inaugurated 120 years ago, specifically in 1092, in the heart of Lavapiés, and that has just reopened its doors after undergoing a facelift to adapt it to the 21st century, but without losing its essence.


Dozens of writers, painters, politicians and musicians have passed through the tables of this century-old café to participate in lively gatherings around its marble tables. Now, this café, which took its name from the old Barbieri Theater (in homage to the Madrid musician Francisco Asenjo Barbieri), is finally reopening after a closed year that has adapted it to the trends of 2022, but without losing its essence and its usual flavor. .

In this new etata, the Barbieri wanted to return the splendor to its main room, preserving its original image with marble and wood tables, large mirrors and its unmistakable vintage red velvet sofas. This room, surrounded by large windows that open onto the street, is presided over by Erato, one of the new muses who represents choral lyrics and romantic poetry.

During the process of reforming the premises, its owner, the hotelier Paul Torrigliade Altolaguirre, has opted to maintain original elements of the café such as the bar, the wall lights, the mirrors, the tables, the chairs, or the mirrors.

But in addition, careful lighting work has been carried out by the Mayice Studio, whose team of designers and interior designers has created pieces with the aim of creating atmospheres and poetic stories through light and glass.

Along with its main room, the Barbieri has an adjoining room that has been recovered and updated, the decoration of which has been renovated to break with the century-old style of the main room. In this space, an avant-garde aesthetic has been opted for through designer furniture and a groundbreaking orange tone on its walls.

Index hide
1 And what is eaten in the new Barbieri?
2 The cocktails, the other great bet of the Barbieri

And what is eaten in the new Barbieri?

With regard to the gastro proposal of the Barbieri, the menu connects directly with the italian inspiration on which it was founded a century ago and also with the Genoese origin of its current owner, Paul Torriglia de Altolaguirre.

Read:  HomeDevices is a free and collaborative app that allows us to organize the devices that we have connected to HomeKit

Among the proposals, made with ingredients brought from Italy, there are starters such as the Caponata (an aubergine ratatouille, San Marzano tomato, celery, olives and pine nuts), the classic Vitello Tonnato served with an anchovy and caper sauce and beef; or the Melanzane Parmigiana, an aubergine, cheese and tomato lasagna.

Pasta also has its place on the menu, with both classic and stuffed proposals. Among the first, there are suggestions such as the Amatricciana, with bavette pasta with pomodoro, guanciale, onion and Pecorino cheese; the From the garden, with spaghetti with slow-cooked seasonal vegetables, or the Pesto, with fusilli served with pesto alla Genovese and Parmigiano 24 mesi, a recipe straight from Liguria.

In the stuffed pasta section, the Zucca Tortellini stand out, stuffed with pumpkin, Pecorino cheese and truffle cream, or the ravioli stuffed with oxtail stew, served in its vegetable and saffron reduction and with large slices of Parmigiano 24 me if.

Barbieri’s pizzas are Veronese style, and they are prepared in full view of everyone in a recently installed oven with natural sourdough made from semi-integral stone-ground organic flour and 60 hours of rest. Among the pizzas that appear on their menu, the Margheritha Barbieri (with San Marzano tomato, Mozzarella Fiordi Latte and cured Grana Padano cheese 24 months), and the Triple pomodoro power&burrata, with San Marzano “speciale” tomato, yellow semi-dried tomato, semi-dried tomato red, 24mesi Parmigiano cheese, burrata and oregano.

On the menu there are also pizzas with a “white” base such as the Rústica, with Mozzarella Fior di Latte arugula, pomodori secchi, prosciuto di Parma and Parmigiano 24mesi, or the Burratta e mortadella, with Mozzarella Fiordi Latte, mortadella, burrata stracciata and pesto de pistachio. For desserts, the Barbieri features classic Italian desserts like Tiramisu, Mini canolo sicialiano and Panna cotta.

The cocktails, the other great bet of the Barbieri

The new Barbieri also highlights its offer of cocktails and snacks, baptized with names of recognized characters and that have a relationship with the neighborhood of Lavapiés. Among them, there is the Cinammon Espresso “Barbieri”, the “Lavapiés” MaiTai, the Spicy Margarita Gloria Fuertes, the “Sabina” Bourbon Sour, the Negroni “García Lorca” or the Bloody Mary from Alfonso XIII.

In Decosphere | Madrid has a new trendy terrace: it’s called Picos Pardos, and it’s on the roof of the Hotel Bless (so imagine its views)

This Maisons du Monde folding shelf table is on sale, and is ideal for optimizing space on small balconies and terraces

These prefabricated houses are sustainable, they can be conditioned in detail, and you have them from 50,000 euros

17 pots, planters and automatic irrigation systems so you don’t neglect your plants on vacation

My ferns have lost the green color of their leaves. What has happened to them, and what can I do to solve it?