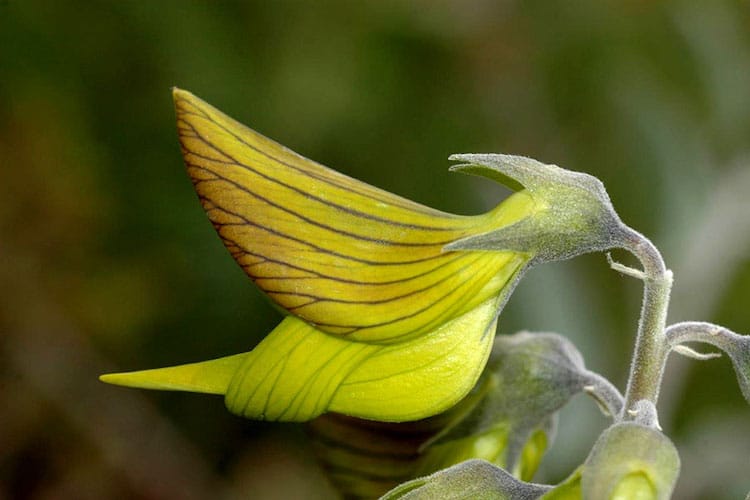 The Crotalaria cunninghamii , popularly known as bird flower royal in appearance, it is an endemic plant in Australia and has the curious feature that leaves resemble hummingbirds.

Also, the plant in question is known as the green bird or royal bird.

Specifically, they can be found in the sand dunes that have the beaches in the northwest and inland of that country.

The shape of these flowers is not accidental since it contributes to their pollination by attracting the attention of birds and insects. As it grows in a tropical and subtropical climate, it needs plenty of water and well-drained soil to develop.

Hummingbird-shaped leaves. Its scientific name is due to the British botanist of the early 19th century Allan Cunningham.

The shape of the Crotalaria cunninghamii flower is actually due to a common anatomical feature of legumes. Many have papillionae flowers, which are characterized by irregular clusters of five petals and a large upper petal known as a banner.

While Darwin hypothesized that the unusual form developed under the selective pressure of bee pollinators, this does not mean that the bees themselves think they are pollinating birds. If that were the case, the plant would never have survived.

In fact, it is very unlikely that any non-human person will confuse flowers with birds. What we are experiencing when looking at the photo is something called simulation .

Similar to the illusion we see when looking at trompe-l’oeil paintings –– pictorial technique that tries to deceive the eye by playing with the architectural environment (real or simulated), perceptive , shading and other optical effects ––, our eyes are tricking us into seeing a representation of an object that is not really present.

They create a crossover between ‘Stranger Things’ and Animal Crossing