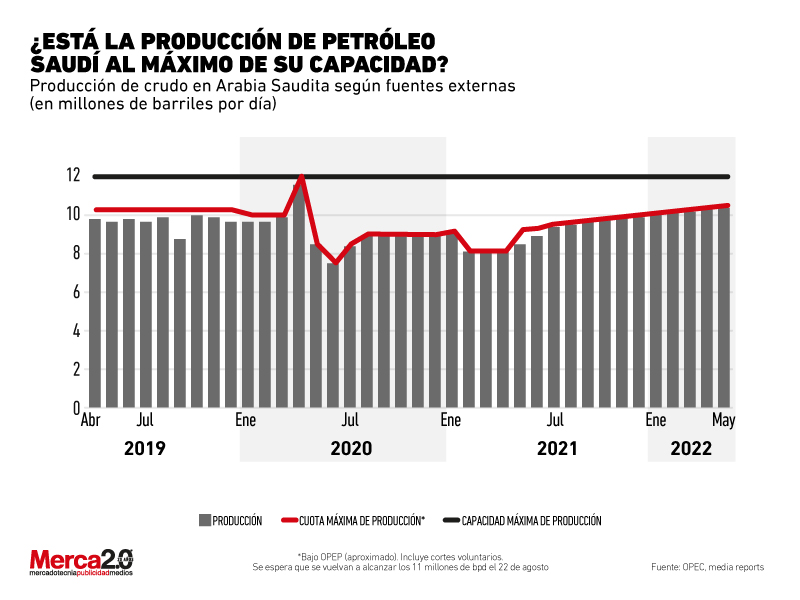 For the past three years, Saudi oil has approached its maximum declared production capacity of 12 million barrels per day in one month, raising questions about its own ability to rapidly ramp up production to stabilize world markets.

Right now, Saudi Arabia is being targeted to fill the Russia-sized supply gap left by embargoes. Information published in BloombergTogether with the Saudis, the United Arab Emirates are the only members of the Organization of the Petroleum Exporting Countries (OPEC) that have additional production capacity, at least on paper.

Even this week, the President of the United States, Joe Biden, plans to travel to Saudi Arabia and among his main agenda to discuss in that country is the increase in world oil supply.

Notably, OPEC had maintained its slow production increases that were scheduled to reverse Covid-era cuts between March and June, recently agreeing to increase production quotas faster for the coming months.

As can be shown in the graph deposited above, Saudi oil has remained below its production quota before the arrival of the pandemic caused by Covid-19 and only once came close to its declared maximum production capacity in April 2020 amid a dispute with Russia.

Should Saudi Arabia be able to produce more, on the other hand, they also probably don’t want to. Bringing Saudi oil production to the brink of its own capacity carries an inherent risk in the event of another disruption, such as occurred not long ago in Libya due to political unrest.

Read:  Pemex takes a step back from its plan and increases its crude oil exports