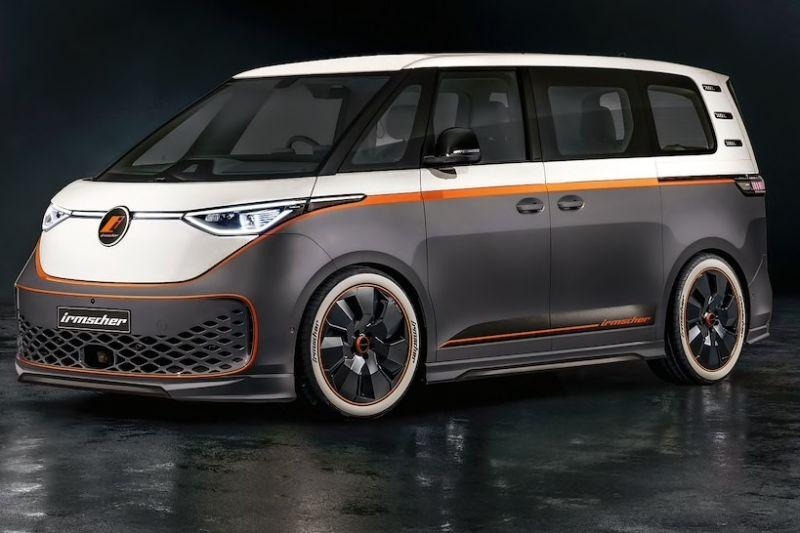 Irmscher has presented the first sports equipment for the new Volkswagen ID. BUZZ. The electric van expresses greater sportiness, along with the benefits of a Camper. An ideal bet for nature lovers and for those who can’t wait for the future GTX version.

The new Volkswagen ID. BUZZ It already has one of the first sports equipment developed by external suppliers to the German manufacturer. His compatriots from Irmscher have unveiled the sportier appearance printed on the electric van in passenger version. A quality that is complemented by another more fun one that invites you to make great trips with everything you need on board.

The German tuner has opted for a package that offers a high dose of sportiness in the ID. BUZZ, highlighting the front view. The package includes a new bumper that is bulkier and lower than conceals the 30 millimeters that have been cut from the height of the bodywork to the ground, also extending through the side skirts and the rear bumper. Elegant but not very discreet tuning.

Also, the ID. buzz can ride 19 or 20-inch alloy wheels in an aerodynamic design and painted in dark gray, with the arch of the tire bathed in white. To draw even more attention, the German preparer offers a two-tone paint, with the lower section in gray, the upper section in white -hood, roof and rear pillar- and the central and windshield pillars, along with gloss black wing mirror caps.

Read:  The Peugeot 9X8 is seen in a television report in France

The belt line in orange delimits the two sections of the bodywork, standing out even more. A fresher color that is also found on the center caps of the alloy wheels. Even the Volkswagen emblems have been replaced by Irmscher’s own.

The only thing that Irmscher has not touched has been the motor and the battery, offering a maximum autonomy of 420 kilometers in the most basic version it is equipped with a battery with a capacity of 58 kWh net. But, in exchange, it offers equipment Camperthe call “iBox». This has three boxes that have a shower, refrigerator and a small kitchen that can be removed from the back, by lifting the tailgate, while on top of the boxes there is a bed. The perfect option for image lovers, for which they have to pay 5,700 Euros and add the 3,000 that the Camper equipment costs.

Will it be possible to learn to drive in a driving school with a manual transmission in the future?