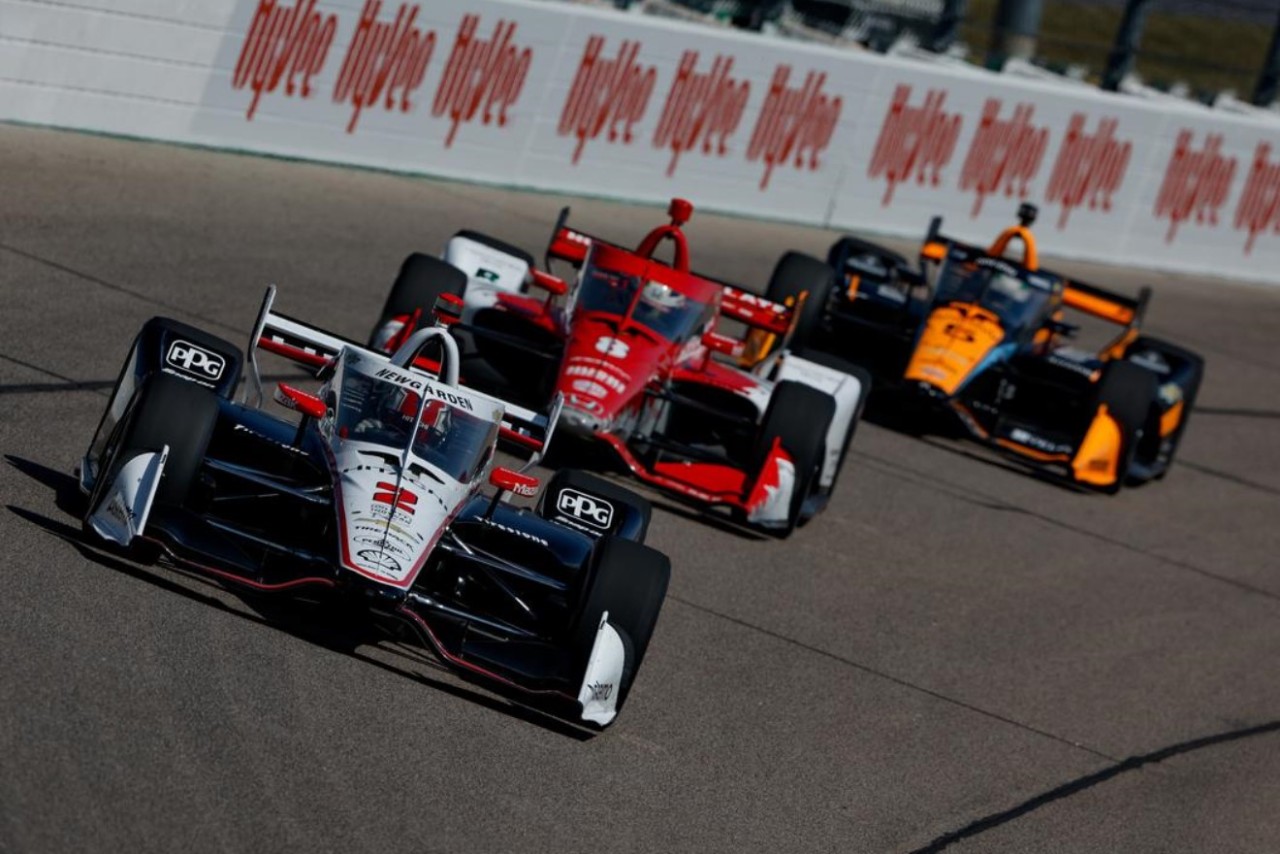 Newgarden had qualified in second position after the Poleman Will Power for the two races of the weekend, but in this one he took his first real opportunity. After the yellow caused by a Jimmie Johnson spin on lap 16 when he touched the inside of the track, Newgarden passed Power at the restart to gain a leadership that would only lose in pit stops. His status, however, was discussed for much of the event, and not just by his teammate. And it is that, after the incident of him, Johnson took it upon himself to put on the show at the Iowa 250.

Having been one of the many drivers who chose to advance his first stoppage to the yellow one caused by himself, the seven-time NASCAR champion advanced positions at close range, inside or outside, and was eighth before inheriting the lead by other stops before making his own. Ganassi’s man repeated the strategy in the next stint, and when he was already fifth, the saving yellow card fell on him with a Felix Rosenqvist crash on lap 111, when the leaders were close to stopping and there were only eight cars on the Newgarden lap. At this point, Conor Daly’s third place on the grid had been neutralized by excessive tire wear, and Pato O’Ward was already second after overtaking Power at his first stop.

Behind, conspicuously, the other Ganassi pilots were arriving, led by a spectacular Marcus Ericsson whose initial twelfth place was already a fifth after the first restart, and who overtook Power on the track before his compatriot Rosenqvist’s yellow card, close to the halfway point of the race and which preceded another quick interruption on lap 127 due to debris on the track . For his part, Scott Dixon had carried out the same strategy as Johnson, in a more discreet way, to get seventh, and Palou was gradually solving a little lack of rhythmhaving risen four places to tenth place.

Ericsson went on the attack again and, together with Power, passed O’Ward at the restart on lap 124. Not happy with this, on the next restart he went for the leader Newgarden, and both they had a light touch when the Swede tried to pass him around the inside of Turn 4. From that point the overall leader’s handling seemed to worsen, and he dropped two positions over the next few laps before he a mistake negotiating an attack by Scott McLaughlin with traffic ahead cost him another five places. Just behind, Johnson and the Dutchman Rinus VeeKay began a long duel in which both passed each other and would pass several times during 70 laps.

A new accident, this time by Ed Carpenter on lap 164, he brought everyone to a stop at once. Palou entered the pits seventh after having gained positions in the previous two starts, and a good stoppage by Ganassi took him out fifth ahead of Johnson and VeeKay. Just before the restart, McLaughlin slipped out of sight with an ill-fitting wheel, and the defending champion took the opportunity to overtake O’Ward and claim podium positions. Nevertheless, the race entered a strategic dilemma: everyone came for gasoline until the end, but they would have to do more than 80 laps with tires that had not been stretched for more than 60 laps, and that after 40 they lost a lot of pace.

In a pure setup duel, Ganassi’s shortcomings this weekend came to the fore. Although Palou briefly paralleled Power, his tires were fading more markedly. With 44 laps to go, he lost position to O’Ward, and in the last five laps he had to give in to the greater push of VeeKay and his teammate Dixon, falling to the sixth place finish. In the lead, O’Ward accounted for Power with 35 to go, and both he and Newgarden went solo in the lead, but the Penske driver won the pace war and the tires of the Mexican withered in the final 15 laps, having to settle for a good second place on his third podium of 2022.

Read:  Enea Bastianini closes the tests in Sepang with a record before the deluge

Thus, although many came to cough at it, nobody knew how to get the glove on a Newgarden that achieved its 24th victory in IndyCar with a six-second advantage, which doubled all drivers to sixth and that he could well have doubled up to third if the race had lasted five more laps. The American not only earned his fourth win at Iowa (where he has led 1,358 laps of the last 2,250, including 208 today), but his fourth win of the yearwhich brings him just fifteen points behind the leadership of an Ericsson who could only scratch an eighth place on a day that promised much more. Palou, in fact, is also close to 33 pointsalthough the Spaniard fell back to fourth place in the table.

Will Power Approaches Pole Record With His 2×1 At Iowa; Álex Palou out of the top 10

Power, who crossed the line 20 seconds from Newgarden, sees his deficit reduced to 22 points after obtaining his fifth podium of 2022, keeping at bay VeeKay (third top 5 of the season) and a Dixon who kept luxury to gain two positions at the end. After Palou, he finished in seventh place Romain Grosjean, who managed the start of his last stint very well to overtake and finish ahead of Ericsson. The Frenchman was the only note of color in an Andretti Autosport that had a dreadful day between Alexander Rossi’s lack of pace and the breakdown that sentenced Colton Herta mid-race on the daywho became sixth and was behind Palou at the time.

Johnson also reached the end of his stint asking for help., and a potential top-five finish turned into an 11th-place finish, his second best IndyCar finish, behind Christian Lundgaard continuing his recent hot streak by recovering 10 places for his third top-10 finish in four races. Like Daly, David Malukas’s good grid position evaporated due to tire wear, and both Takuma Sato and Simon Pagenaud completed the list of incidents with a mutual touch in the last stint when they were already out of options. Tomorrow, second round to correct mistakes or repeat successeswith a track that will be colder and without rubber due to the expected rains.