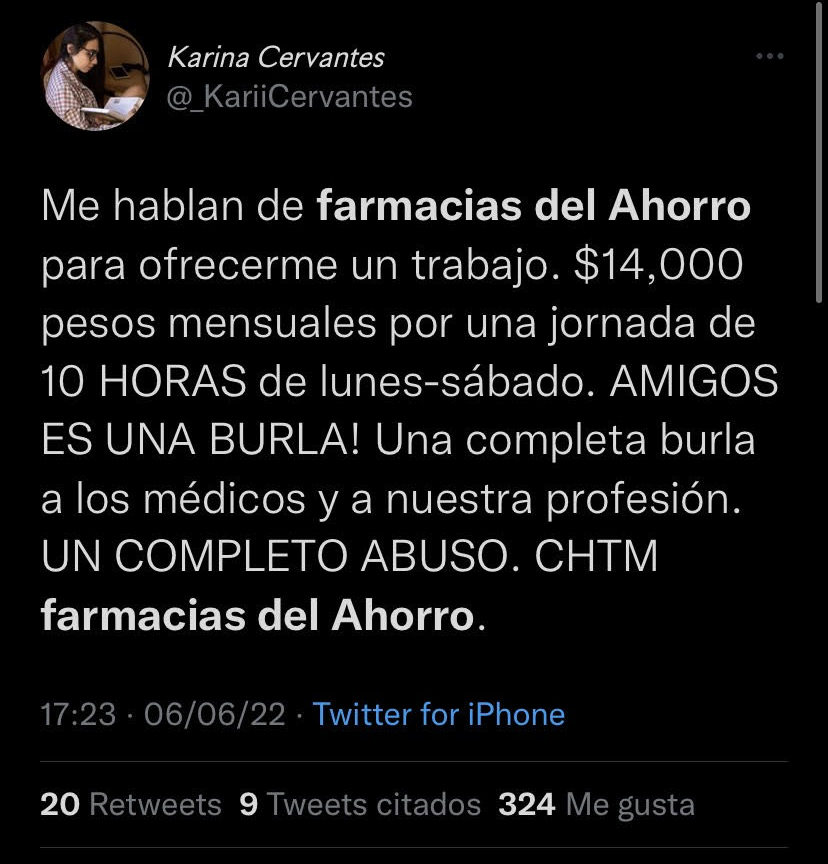 A thread on Twitter went viral exposing a never-ending debate: the medical salary. Things started like this, medical He exposed the little salary he was offered in Savings Pharmacies such as doctor, with a working day of 10 hours from Monday to Saturday.

To which he replied: IT’S A JOKE!

They talk to me about savings pharmacies to offer me a job. $14,000 pesos per month for a 10-HOUR shift from Monday-Saturday. FRIENDS IT’S A MOCKERY! A complete mockery of doctors and our profession. A COMPLETE ABUSE. CHTM Savings pharmacies.

However, the debate began when several doctors they pointed out to the graduate of being born in a golden cradle, since that salary was above the average. But others applauded his decision, saying that it was correct to ask for fairer salaries.

They speak of complete abuse when the minimum wage is $150. 14 thousand pesos is more than what the prom professional earns. in Mexico. They want to start earning 50 thousand pesos, and aside from idealism, I speak based on real criteria. They are born in a cradle of gold and run into real life

Index hide
1 DISADVANTAGES of being a doctor in an office attached to a pharmacy
2 Why is this scheme so popular?
2.1 Too bad for doctors…
2.2 Specific prescription
2.3 low wage
2.4 “loan” contracts
2.5 no training
2.6 no personal wholeness

More than two decades ago he arrived in Mexico the pharmacy consultation model, which gained great popularity among patients. Not only for its accessibility in price, but also for its location and comfort. However, is it just as profitable for the doctor?

Why is this scheme so popular?

Consultations start at 30 pesos and that is attractive to the majority of the population, The service is practically immediate and it is not necessary to stand in long lines or take out a card, as is the case at the Mexican Institute of Social Security (IMSS) and the Institute of Security and Social Services for State Workers (ISSSTE).

But while for patients it can be beneficial that these types of places exist due to their proximity and price, for doctors this is not necessarily the case.

Too bad for doctors…

Below are some adversities of working as a doctor in this area according to research; Working conditions in offices adjacent to private pharmacies in Mexico City: perspective of medical personnel.

In some cases, they receive economic incentives granted by the pharmacies. These are granted for the volume of consultations (by achieving a limit of daily consultations) and procedures performed. By the level of monthly sales reached by the pharmacy or as a percentage of the prescribed drugs that the user buys at the pharmacy.

The amount paid may vary depending on the presentation and cost of the drug.

Their economic income varies, since it is subject to the value of the consultation paid by the users, and they do not have employment benefits such as medical services or
retirement savings plan.

There is difficulty in accessing some type of training for updating. The options offered by this type of office are conferences on medical conditionssometimes online, which they perceive as more commercial than academic.

Most of these offices do not meet job and professional expectations, since they do not reward the years of dedicated study.

NOTE: More than 6,000 doctors did NOT attend their recruitment appointment to…