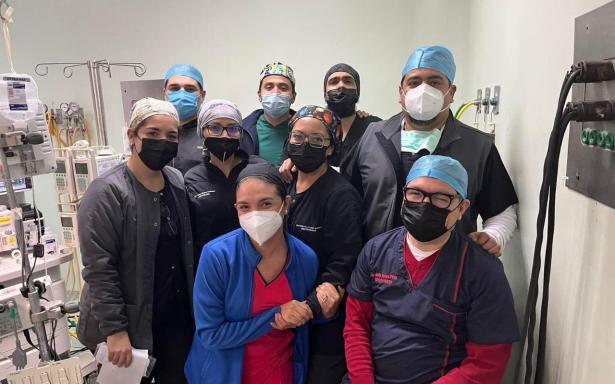 thanks to one multi-organ procurement in HGZ No. 2 in Saltillo, doctors from the Specialty Hospital No. 25 of the IMSS in Nuevo León performed 4 transplants; one liver, two kidneys and two corneas.

Index hide
1 UMAE No. 25 of the IMSS adds four transplants in the first quarter of the year
2 When were they transplanted?
2.1 “I am happy and very grateful because my sister-in-law has received a liver transplant. I am very grateful to the doctors who were always looking out for her step by step. Even calls to find out if she was okay, to see how she reacted to the medications that were offered to her and during the operation, ”she said.

UMAE No. 25 of the IMSS adds four transplants in the first quarter of the year

With these actions, the UMAE No. 25 of the IMSS adds four transplants in the first quarter of the year liver, 14 kidney and 40 corneas.

In just two days, the High Specialty Medical Unit (UMAE), Specialty Hospital No. 25 of the Mexican Social Security Institute (IMSS) in Nuevo León. transplanted one liver, two kidneys and two corneas to prolong and improve the quality of life of the five recipient patients.

The above, thanks to the fact that a family fulfilled the wish of a 41-year-old man who, when he died. He became a multi-organ donor at the Hospital General de Zona (HGZ) No. 2 of the IMSS in Saltillo, Coahuila.

As soon as they had the organ offeringon Saturday, April 2, the prosecutorial team from UMAE No. 25 traveled by road for 45 minutes to the operating room of HGZ No. 2 Saltillo to carry out, in four hours, the multi-organ procurement.

Dr. Gerardo Luna López, Head of the Transplant Division of this Specialty Hospital No. 25, reported that for his transfer to Monterrey. The organs had a packaging with special solutions of conservation and a temperature of zero to four degrees centigrade. The liver lasts 12 hours to be able to transplant, the kidneys 24 hours and the corneas 5 days.

When were they transplanted?

The liver was transplanted on Sunday, April 3, to a 50-year-old woman, in a specialized surgical procedure that lasted about six hours. The patient had a tumor which had caused him to lose liver function by 80 percent with a prognosis of a maximum life of one year.

By receiving a new organ in her body, the recipient will leave behind the suffering caused by the accumulation of toxins in your body. As well as brain damage, memory loss, bleeding from the digestive tract, fainting, malnutrition and others effects of liver failure. At UMAE No. 25, the recipient received a new opportunity at life that she had been waiting for a year.

Mrs. Blanca Leticia, a relative of the patient, and who accompanied him in his illness process. He thanked the care received in this IMSS medical unit in Nuevo León.

“I am happy and very grateful because my sister-in-law has received a liver transplant. I am very grateful to the doctors who were always looking out for her step by step. Even calls to find out if she was okay, to see how she reacted to the medications that were offered to her and during the operation, ”she said.

Liver transplantation is a highly complex surgical process, due to the fact that there are four structures that must be connected to the body of the receiver. The hepatic artery, the portal vein, the suprahepatic veins and the bile duct, all of them with millimeter gauges that require extreme precision to fit and function properly, explained Luna López.

Read:  These headphones are compatible with PS5, have an official PlayStation license and are worth just over 25 euros

In the case of the procured kidneys, they were transplanted also on Sunday, April 3, to a 48-year-old woman and a 50-year-old man, both of whom underwent three days a week of hemodialysisauxiliary hospital treatment to cleanse the blood of toxins because his kidneys had zero functionality.

When receiving kidney transplants, these patients They will no longer be dependent on a hemodialysis machine and will not only prolong but improve their quality of life.

The procured corneas were placed on Monday, April 4, in two patients, a 50-year-old woman and a 55-year-old man, who had completely lost their vision.

This surgery was ambulatory and lasted one hour, in which Ophthalmologists specialized in transplants participated. Which, along with the rest of the work team, gave patients the possibility of recovering their sight immediately after surgery.

The patients who received the liver and kidneys are in intensive therapythe 72 hours of greatest risk have already passed and they show good evolution of your health. The corneal transplant they returned home with their sight restored after surgery.

Throughout the transplant process, which began with the procurement, it was fundamental the coordination of about 100 workers of health involved. Among transplant surgeons, anesthesiologists, hepatologists, specialists in Nephrology, Ophthalmology, Nursing staff. As well as experts in intensive care Social Work personnel, Nutrition, Laboratorians, Imaging personnel, stretcher bearers, among others.

These surgical procedures are part of the transplant activity that distinguishes UMAE No. 25 and that, in the first quarter of the year. they added four liver transplants, 14 kidneys and 40 corneas, reported the head of the transplant division of the medical unit.

In addition, this hospital, with more than 40 medical specialtieshas ranked first in liver transplants, third in kidney and corneal transplants in the IMSS nationwide.

Cofepris and UNAM establish a Specialization Course in Health Law

#ALMOMENT Authorities warn about the use of the drug Alevian Duo