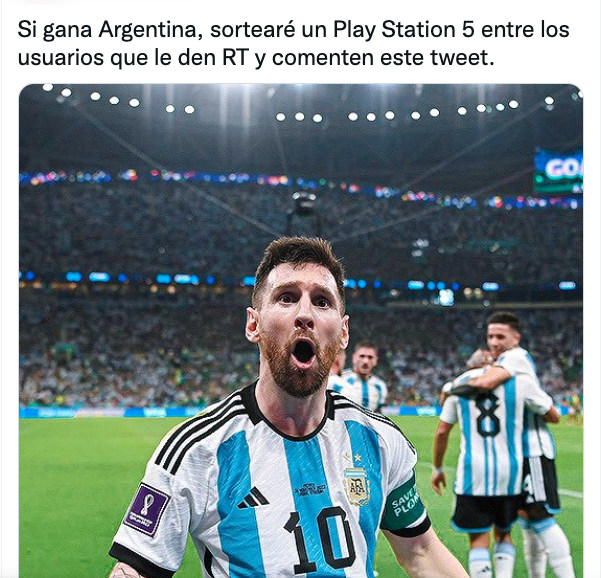 The World Cup party is about to end, and therefore the grand final is already a few days away from being played, so the fans and squads have begun to earn a place within the digital conversation, as shown a growing trend of “If Argentina wins”, in which Internet users promise to throw the house out the window.

With a growing community of just over 4,950 million Internet users, digital conversation has become paramount in the new social reality, this if it is taken into account that just over 63 percent of the world population is active. within the network, this in accordance with what is indicated by the digital report 2022 of “We are social”, Similarly, it should be taken into account that slightly more than 58 percent of the world population has an active profile within one of the existing social networks, figure that would represent an increase of at least 10 percent compared to what was indicated a year ago.

That is why the great impact and scope of the digital conversation must be taken into account, since within it all kinds of viral moments can develop, which can even generate brand positioning and create opportunities for personal and professional growth. .

In the last hours, the phrase “If Argentina wins” has begun to go viral, this a few hours after it is carried out andhe match between Leonel Messi’s squad and the World Cup surprise Croatia, Well, in comments, many have begun to offer from a Play 5, going through Cash, and a more comical brand “to make a grandmother” to the mother of some Internet users, hilariously demonstrating the trust that has been placed on the selection albiceleste.

If Argentina wins, I will raffle a Play Station 5 among the users who RT and comment on this tweet. pic.twitter.com/stUmUbn6SL

If Argentina wins, I’ll talk to you

If Argentina wins the World Cup and we reach 1,000❤️ I’ll get this tattoo. pic.twitter.com/BlscTpbFsZ

If Argentina wins, I’ll give a kiss to everyone I’ve come across in the square, and if not, too.

Without a doubt, the World Cup party has left several unique and viral moments, such is the case of a Mexican who won over the digital conversation, for his way of imitating a tiger blanket vendor in Qatar, character and popular merchant in fairs and towns in Mexico.

Oxxo stores and pharmacies are set on fire in municipalities of Guanajuato: what do we know