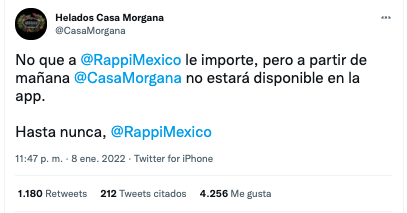 Without a doubt, one of the strongest strategies of the community manager it is knowing how to use trends in favor of the brands they manage. In recent days, the Twitter account of Helados Casa Morgana got on the trend of “bye Rappi” and decided to stop being part of the platform. As a result, the brand advertised the trend and demonstrated that it has a stance on the “classism and racism” that “promotes” –according to social media users– the company’s latest campaign.

Where did the trend that Helados Casa Morgana used to promote itself come from?

Through the social network Twitter, users vitalized the hashtag #AdiosRappi. This, after the application will launch its new campaign where the comedian, influencer and presenter of “The pulse of the Republic”, Chumel Torres is the new face of the company.

The public figure, who has 979,000 followers on Instagram and 3,363,039 followers on Twitter, has been involved in a series of controversies, which have cost him the disapproval of the people.

One of the best known was HBO’s decision to suspend the program starring Torres, after he was involved in a controversy with messages that were described as sexist and hatred after a collaboration with the National Council to Prevent Discrimination (Conapred ) did not come out in the best way.

Another controversy that ran on social networks was the publication of a brunette Barbie, in which she published “sweep, mop, shake and iron like real.” The publication was criticized by users and Chumel reinforced the criticism of users.

With this miserable you announce yourself, @RappiMexico?
Right now I uninstall your App. pic.twitter.com/9Rew3DWYeK

Regarding the popularization of the hashtags #AdiosRappi and that Chumel Torres was a trend for several days, the digital creator made fun of the issue.

Read:  this is what the expensive collaboration looks like

Helados Casa Morgana gives us a lesson in advertising

ComScore data says that 80 percent of the time we spend with smartphones we do it by browsing apps, In other words, we use applications for everything because they offer a greater experience, they are fast and accessible.

The apps embed the trend segment within themselves. That represents an opportunity for brands, advertising and marketers to make content appropriate without making it feel invasive to users.

With knowledge of this strategy, Helados Casa Morgana, which is the brainchild of the executive producer and director of Shark Tank México y Colombia, Kirén Miret, decided to use the trend as advertising and to reinforce its disapproval of Rappi and the values ​​it promotes and identifies society with the role of Chumel Torres in his campaign.

Through a tweet on the social network, he commented that:

“No that to @RappiMexico you care, but starting tomorrow @HouseMorgana it will not be available in the app. See you never, @RappiMexico“

No that to @RappiMexico you care, but starting tomorrow @HouseMorgana it will not be available in the app.

More than emphasizing its politically correct position and its values ​​in front of its consumers, the brand obtained free publicity from users who began to respond to the tweet, publicizing the ice cream brand, which has 12.8 thousand users on the network Social.

“I congratulate you. They have managed to be a trend on Twitter taking advantage of Rappi and Chumel. Nobody (or very few know them, but now they are going to know them. Good tactic. Then look for another form of delivery ”, comments user Josep Cobos.

I congratulate you. They have managed to be a trend on Twitter taking advantage of Rappi and Chumel. Nobody (or very few) know them, but now they are going to know them.
Good tactic. Then look for another form of delivery.

Returnal would be the next PlayStation exclusive on Steam